Infrastructure as a fundamental component of colonialism in Canada, Singapore, Armenia, central Asia, Palestine, the Persian Gulf, Colombia, and Syria. 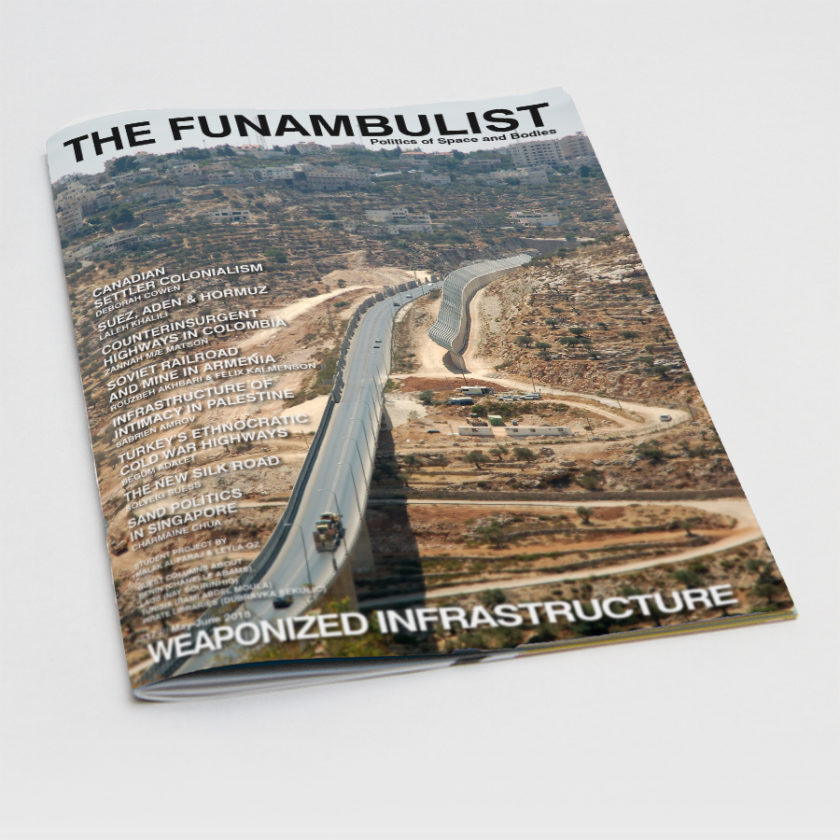 Weaponized Infrastructure constitutes the 17th issue of The Funambulist. It examines the use of infrastructure (railroad, highways, pipelines, canals, land reclamation, etc.) as a political weapon. “A construction project is worth a battalion” said French General and colonial administrator Hubert Lyautey (1854-1934), a key strategist of French colonialism in Vietnam, Madagascar, and Morocco. This issue’s articles describing the role of infrastructure in colonial projects in Canada (Deborah Cowen), Singapore (Charmaine Chua), Central Asia (Solveig Suess), Kurdistan (Begüm Adalet), and Colombia (Zannah Mæ Matson) illustrate such a strategy. Other contributions describe the geopolitics of narrowness materialized by the Suez Canal, the Gulf of Aden, and the Strait of Hormuz in the maritime globalized capitalist project (Laleh Khalili), the story of Sovietic infrastructural remains in Southern Armenia (Rouzbeh Akhbari & Felix Kalmenson), the construction of a notion of “infrastructure of intimacy” in the context of the Israeli systematic destruction of Palestinian homes (Sabrien Amrov), and the project of rehabilitation of the toxified Euphrates River between Syria and Iraq (Malak Al-Faraj & Leyla Oz). The guest columns that open the issue are dedicated to the trauma of the Laos War in relation to motherhood (Nay Saysourinho), a critique of the tourism built on the idea of the Black diaspora’s return to Africa (Chanelle Adams), an update on the Tunisian youth’s political struggles (Rami Abdel Moula), and some reflections on the access to knowledge and pirate libraries (Dubravka Sekulic).