An internationalist issue to celebrate the 150th anniversary of the Commune, dialoguing with communal experiences in Syria, Venezuela, China, Martinique, Mexico, Tunisia, and more. 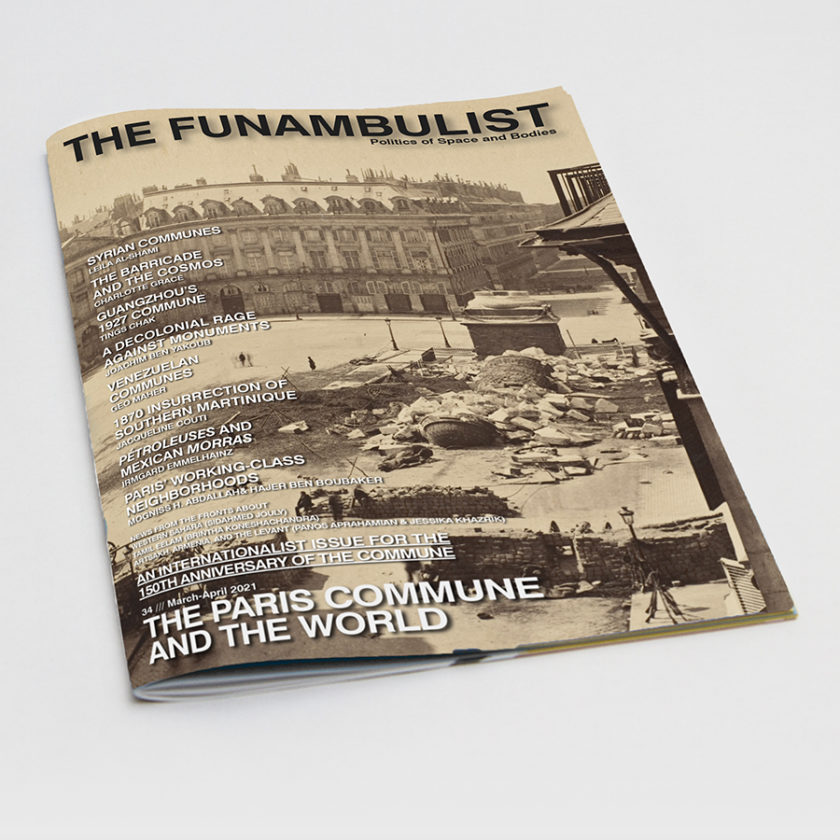 Welcome to the 34th issue of The Funambulist, an internationalist issue for the 150th anniversary of the Paris Commune.

The Paris Commune and the World constitutes an attempt to extract this 150-year-old revolutionary event from the imaginary of the white left to place it instead in a rhizome of similar communal experiences in the Global South. From the 1927 Guangzhou Commune (Tings Chak) to the contemporary Venezuelan (Geo Maher) and Syrian (Leila Al-Shami) communal councils, we discuss the radical change of modes of sovereignty the Commune implies. Female Communardes are placed in dialogue with women of the foundational 1870 Insurrection of Southern Martinique (Jacqueline Couti) as well as Mexican Morras (Irmgard Emmelhainz). The ceremonialized destruction of the Vendome Column that appears on the issue’s cover is discussed in relation to an ongoing decolonial rage against monuments (Joachim Ben Yakoub). The barricade, inseparable from the Paris Commune, is the object of an architecture analysis (Charlotte Grace). Last but far from least, we take a walk in Paris’ working-class neighborhoods to exhume their political layers from the Paris Commune to today’s antiracist activism (Mogniss H. Abdallah & Hajer Ben Boubaker).

In the issue’s “News From the Fronts,” Brintha Koneshachandra provides a diasporic perspective on the bulldozing of Tamil monuments in Eelam, Sidahmed Jouly writes about the struggle against the Moroccan occupation of Western Sahara, and Panos Aprahamian & Jessika Khazrik reflect on the modes of solidarity with Artsakh and Armenia under the same Israeli-made drones that fly in the skies of Gaza and Beirut.