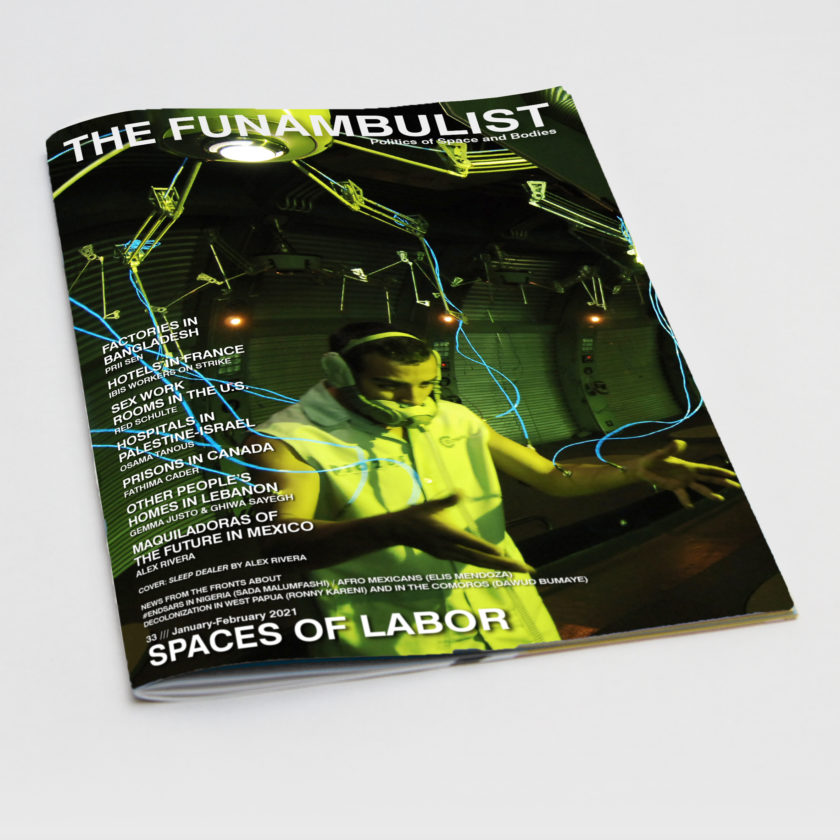 Welcome to the 33rd issue of The Funambulist, the first of our six 2021 issues!

Spaces of Labor is an examination of the way the capitalist exploitation of racialized and gendered workers uses space as a means to enforce itself and, in turn, how these same workers appropriate this space in their forms of resistance. Some of the issue’s contributions come from laborers themselves. The Ibis Paris Batignolles Hotel workers tell us about their daily labor, as well as the strike they have undertaken and sustained for the last 17 months. Gemma Justo and Ghiwa Sayegh describe the life of migrant domestic workers in Lebanon under the regime of Kafala. Red Schulte talks about the sex work economies of space. Osama Tanous accounts for being a Palestinian physician in an Israeli hospital in Haifa. The three other contributors are working closely on issues of labor. Prii Sen dedicates her entire research to garment female workers in Dhaka and their revolts. Alex Rivera made a film (Sleep Dealer, 2008) anticipating the remote labor maquiladoras of the future in Northern Mexico. As for Fathima Cader, she is a labor lawyer and writes about the need to abolish prison staff unions in an abolitionist agenda.

As usual, our News from the Fronts section that opens each issue and complements the main dossier, includes articles reflecting on ongoing struggles. In this issue, Sada Malumfashi describes the #EndSARS uprising in/from Nigeria, Elis Mendoza reflects on the political identity of Afro-Mexicans, Ronny Kareni provides an introduction to West Papua’s decolonization agenda, and Dawud Bumaye presents the Comorian fight against French colonialism in Mayotte.