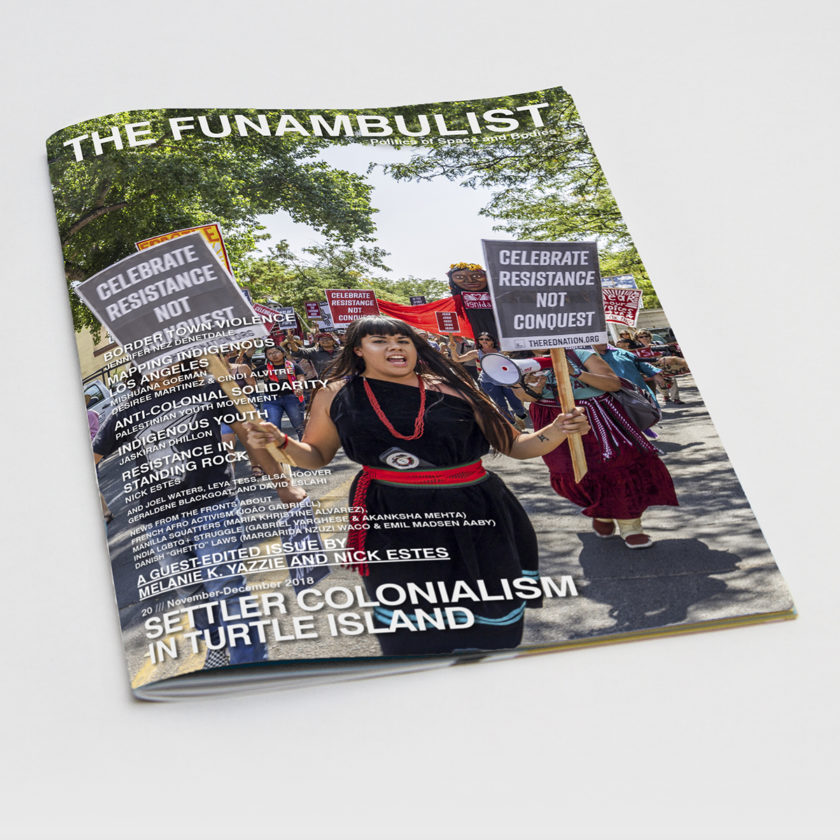 Settler Colonialism in Turtle Island is a first ever issue of The Funambulist that was guest-edited. We are very excited to propose this issue edited by Turtle Island Indigenous scholars and activists Melanie K. Yazzie and Nick Estes (who had contributed twice to the magazine in the past). Amidst a very busy schedule, they kindly accepted our invitation last year to curate a dossier around settler colonialism and Indigenous resistance in what many call “North America,” which we call “Turtle Island” throughout the issue.

The protagonist of the photograph by Anson Stevens-Bollen that we proudly used as a cover for the issue is Jennifer Marley from San Ildefonso Pueblo, past contributor to The Funambulist (issue 6), and member of The Red Nation (as Melanie and Nick are). On September 8, 2017, she was part of (if not leading) the #AbolishTheEntrada protest in Santa Fe, New Mexico. Resisting the city’s annual reenactment of the 1692 Spanish conquest of her people, she was brutally arrested, jailed, and falsely charged with a felony — a charge later dropped.

The issue proposes several facets of Indigenous struggles in Turtle Island. Most of them depict Native lives in spaces that are not the reservations where the colonial narrative usually situates them. Whether in large cities such as Los Angeles (Mapping Indigenous LA) or Saskatoon (Jaskiran Dhillon) or settler border towns in the periphery of reservations (Melanie K. Yazzie & Nick Estes, Jennifer Nez Denetdale, Joel Waters) the urban dimension of the first half of the dossier is omnipresent. In the second half is dedicated to various forms of Indigenous resistance through space-making (Nick Estes), anti-colonial solidarities (Palestinian Youth Movement), representative transgression (Leya Tess), or architecture researches/projects (Elsa Hoover, Geraldene Blackgoat, David Eslahi).