A dive into the ethics of the strategic use of political violence in Gaza, Black America, Japan, Eelam, Rojava, Kashmir, Algeria, and India. 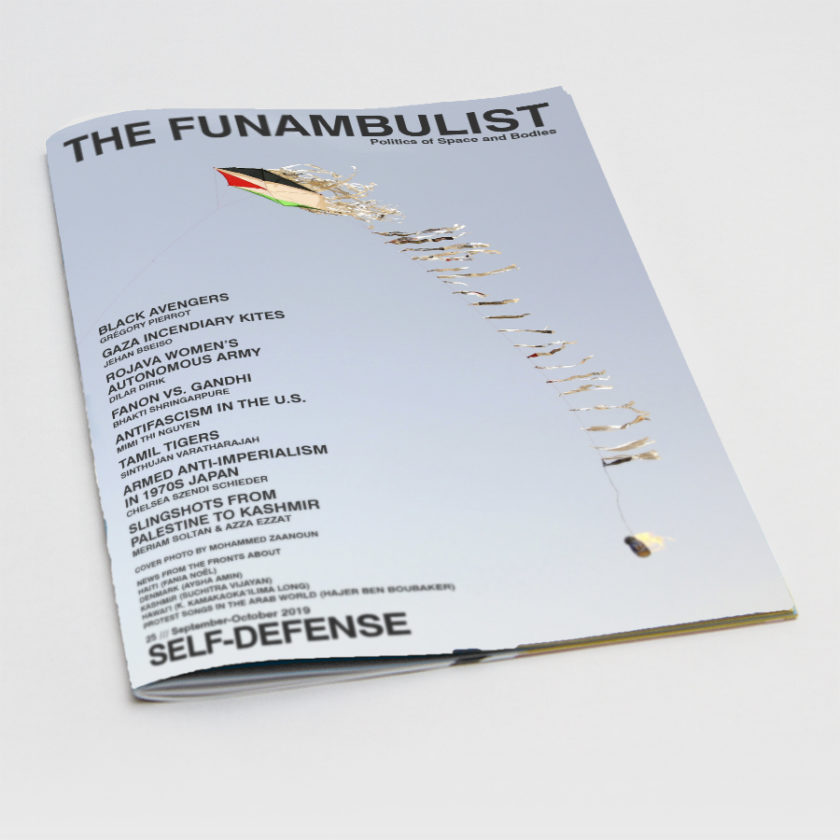 After addressing the relationship of such struggles to space (issue 21), publications (issue 22), architectures (issue 23), and futurisms (issue 24), issue 25 Self-Defense takes on difficult questions such as: why should we always comply to a practice by default of non-violence? Could we even think of an ethics of violence applicable to the struggles with which we are involved? And finally, when is self-defense legitimate?

In this issue, the baseball bat behind the counter of the Bay Area punk record store (Mimi Thi Nguyen), the incendiary kites of Palestinian resistance in Gaza (Jehan Bseiso & Mohammed Zaanoun), the Kashmiri and Palestinian slingshots (Meriam Soltan & Azza Ezzat), the bombs of the Algerian National Liberation Front (Bhakti Shringarpure) and of the East Asia Anti-Japan Armed Front (Chelsea Szendi Schieder), or the guns of the Liberation Tigers of Tamil Eelam (Sinthujan Varatharajah) and of the Rojava Autonomous Women’s Army (Dilar Dirik), constitute direct strategies of self-defense in contexts where that against which the resistive violence is directed (the neo-nazis, the Israeli, Indian, French or Sri Lankan armies, ISIS…) have engaged in processes of attempted annihilation towards those who practice and stand for the right to self-defense. In this context, self-defense is not just an act of survival, but also an act of existence.

As usual, our News from the Fronts section takes on current political struggles in the world: the Hawaiian Indigenous struggle to protect the sacred mountain of Mauna Kea (K. Kamakaoka’ilima Long), the resistance to the Indian military occupation of Kashmir (Suchitra Vijayan), the fight against corruption in Haiti (Fania Noël), the spatialization of structural racism in Denmark (Aysha Amin), and the tradition of protest songs in the football stadiums of the Middle East and North Africa (Hajer Ben Boubaker).