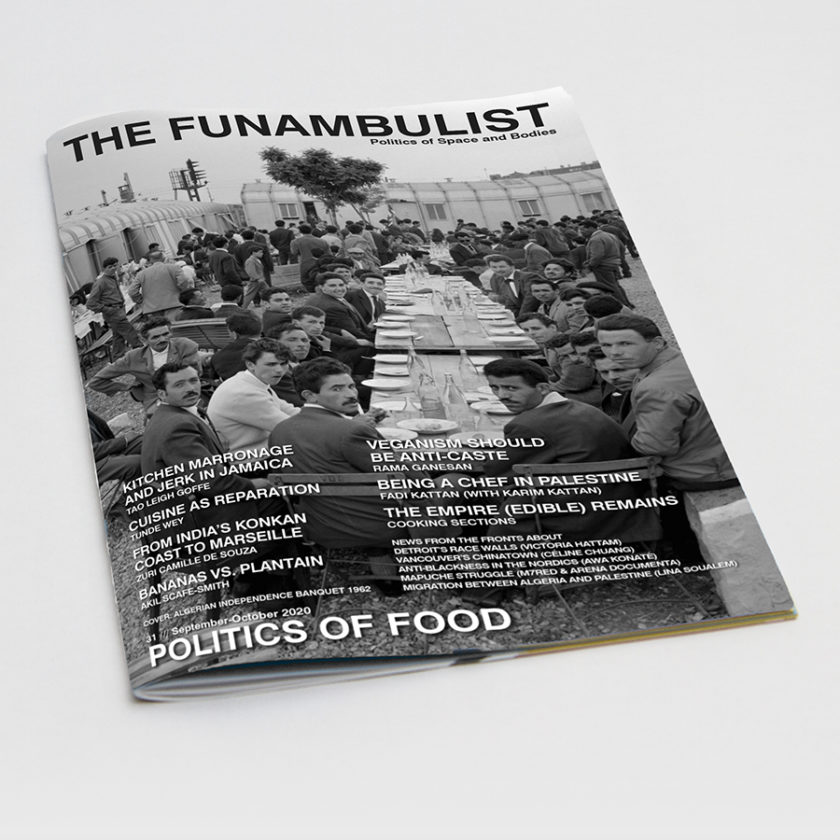 Welcome to the 31st issue of The Funambulist! With it, we’re starting our sixth year of publishing the magazine! After the success of our two last issues (thank YOU!), we hope that this one will encounter a wide readership too. Thank you so much for your support!

Politics of Food is an open-ended examination of various dimensions behind food and the act of cooking: labor, ingredients, memories, identity, self-orientalization, marooning, infrastructure, transportation, societal hierarchies and, as usual with us, space. The main dossier includes four texts (each associated to a recipe generously provided by our contributors) about the history of jerk, a Jamaican Maroon cooking style born in the struggle for existence against slavery (Tao Leigh Goffe), the links between the Caribbean and the diaspora in the U.K. through the well-known ‘opposition’ of bananas and plantains (Akil Scafe-Smith), the veganist solidarity with the struggle against Indian structural casteism and anti-Muslim racism, despite what may seem to oppose them at first sight (Rama Ganesan), and the personal and political wanderings of a chef between the Indian Konkan Coast and Marseille (Zuri Camille de Souza). It also includes three interviews about the relationship between food production, colonialism, and ecocide (Cooking Sections), the idea of reparations for Black folks through food demonstrations (Tunde Wey), as well as the numerous political daily dimensions involved in being a chef in Bethlehem, Palestine (Fadi Kattan, interviewed by Funambulist-friend Karim Kattan).

As usual, our News from the Fronts section that opens each issue and complements the main dossier, includes articles reflecting on ongoing struggles. In this issue, we look at a history of migration between Algeria and Palestine (Lina Soualem), anti-Blackness in Scandinavia (Awa Konaté), the Detroit “race walls” (Victoria Hattam), Mapuche resistance against oil extraction in Vaca Muerta, Argentina (M7Red & Arena Documenta), and the forms of solidarity between the struggle against the gentrification of Chinatown in Vancouver and the fight against settler colonialism (Céline Chuang).

The cover of the issue shows a banquet on July 5, 1962, the day of the Algerian independence, organized in Nanterre (northwestern Paris banlieue) where thousands of Algerians were living and had taking part in many ways to the anti-colonial Revolution. In the context of this issue dedicated to the politics of food, it appeared to us as non-innocent that the ultimate political victory after 132 years of French colonialism was celebrated around a meal in the center of the housing quarters. May we all share a revolutionary banquet at least once in our life!