The Pan-African political project, from the Haitian Revolution to the future; from Accra to Lisbon; from Dar es Salaam to Harlem; from Algiers to Cape Town. 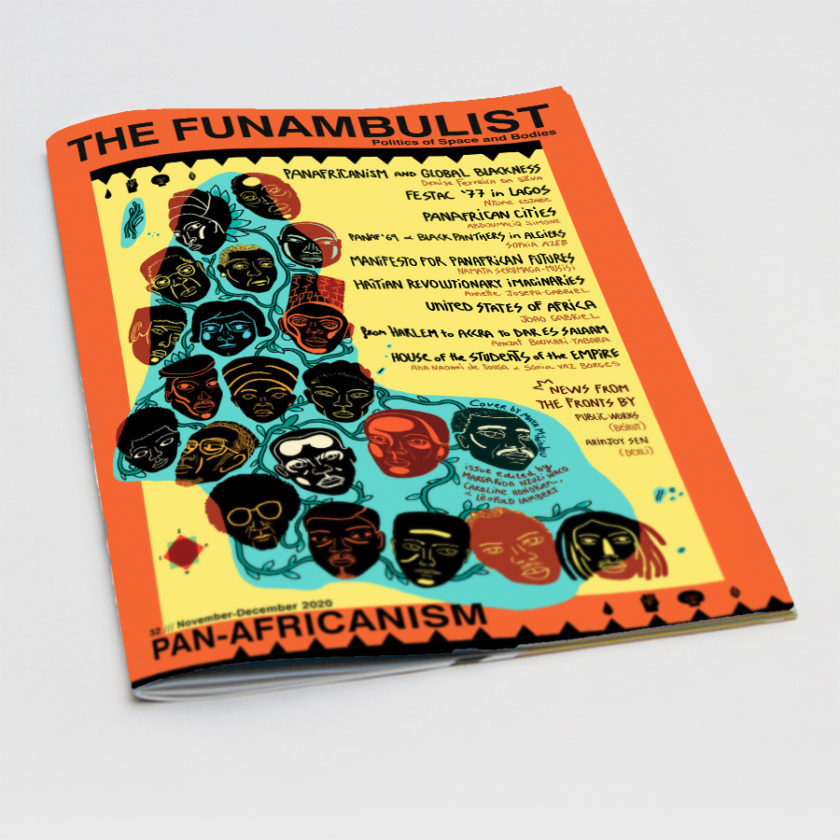 We’d like to offer all people living on the African Continent the possibility to download this issue’s digital version for free. In order to do so, they may use the coupon “I LIVE IN AFRICA” when checking out their order of the digital version. We trust that readers in other parts of the world will respect this principle and will purchase the issue normally. Thank you very much!

Welcome to the 32nd issue of The Funambulist. For once, we curated and coordinated its editorial line amongst the three of us (Caroline Honorien, Margarida Waco, and Léopold Lambert) in order to combine our perspectives on the topic.

Pan-Africanism is an issue dedicated to a political project that “maps onto Blackness” (Denise Ferreira da Silva) between the African Continent, the Afro Diaspora, and beyond; a project that can serve as a force and a reference for all people struggling against colonialism or neocolonialism. We begin its history with the Haitian Revolution (Annette Joseph-Gabriel), which strongly influenced the imaginary of those who, from Harlem to Accra to Dar es Salaam, have designed the dream of a political union (Amzat Boukari-Yabara). The struggle against European colonialism materialized Continental solidarity when it was not happening at the very core of the Empire itself (Ana Naomi de Sousa & Sónia Vaz Borges), while cultural and political festivals such as Panaf ’69 in Algiers (Sophia Azeb) or Festac ’77 in Lagos (Ntone Edjabe) ceremonialized it. Yet, Pan-Africanism is not a project of the past: it is fundamentally a project of the present and the future. Reading the Continent through its cities rather than its states can constitute one way to approach it (AbouMaliq Simone); another consists in strategizing towards an African federal state (Joao Gabriel). In the same spirit, we wanted to conclude the issue with a manifesto for Pan-African futures (Namata Serumaga-Musisi), which dialogues with the beautiful and vibrant cover drawn for us by Maya Mihindou.

As usual, our News from the Fronts section that opens each issue and complements the main dossier, includes articles reflecting on ongoing struggles. In this issue, Public Works Studio reports on the hardships experienced by the most precarious residents of Beirut after the August 4 explosion, and Arinjoy Sen applies a spatial politics reading to Hindu nationalist policies in India.