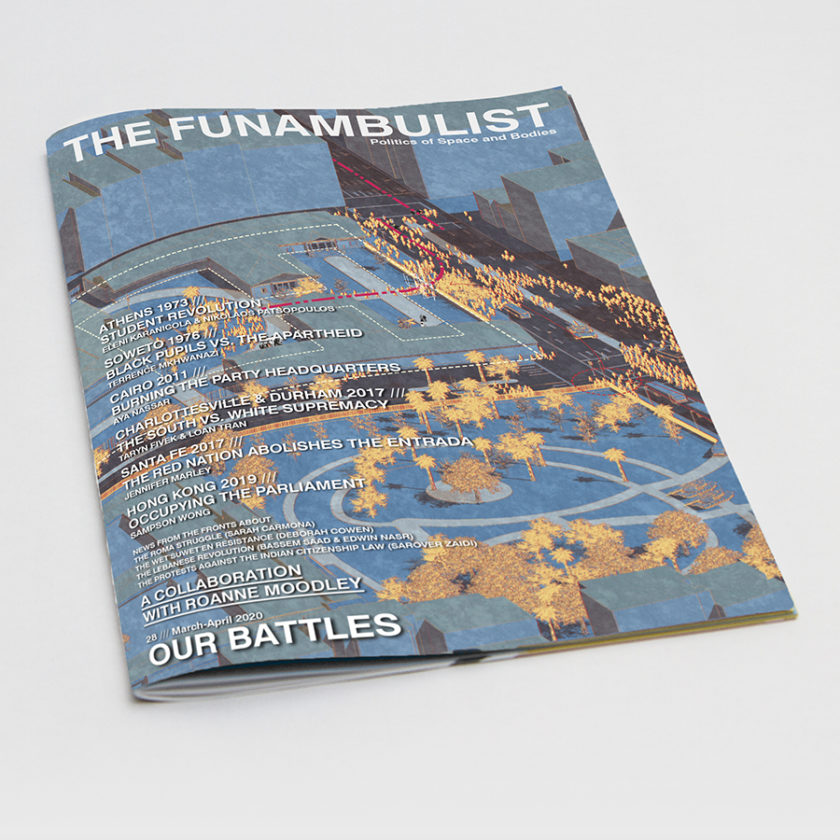 Welcome to the 28th issue of The Funambulist, Our Battles. For it, we commissioned the brilliant Durban-based architecture graduate Roanne Moodley to produce drawings for five of the six “battles” featured in it. These “battles” constitute punctual uprisings in the history of longer political struggles between anticolonial, antiracist, and/or antiauthoritarian movements and the forces of state oppression. This issue gathers only a few of the numerous battles that we would have loved including in it: the 1973 student revolt against the military junta in Athens (Eleni Karanicola & Nikolaos Patsopoulos), the 1976 Soweto uprising against the Apartheid (Terrence Mkhwanazi), the 2011 Egyptian Revolution (Aya Nassar), the 2017 organizing against white supremacy in Charlottesville, VA and Durham, NC (Taryn Fivek & Loan Tran), the 2017 victorious abolition of the colonial Entrada parade in Santa Fe by the Red Nation (Jennifer Marley), and the recent 2019 occupation of the Hong Kong Legislative Council by young protesters (Sampson Wong). As usual, our contributors are not bystanders of these histories of struggles: all of them live with the conditions inherited from the event they describe in the following pages. Four of this issue’s contributors were part of the battles themselves, and one was even the main protagonist.

As usual, our News from the Fronts section that opens each issue and complements the main dossier, includes articles reflecting on ongoing struggles. In this issue, we cover the solidarity actions with the Wet’suwet’en indigenous struggle in Turtle Island (Deborah Cowen), the Lebanese Revolution (Bassem Saad & Edwin Nasr), the fierce fight against the Islamophobic citizenship law in India (Sarover Zaidi), and the Romani struggle in Europe (Sarah Carmona).