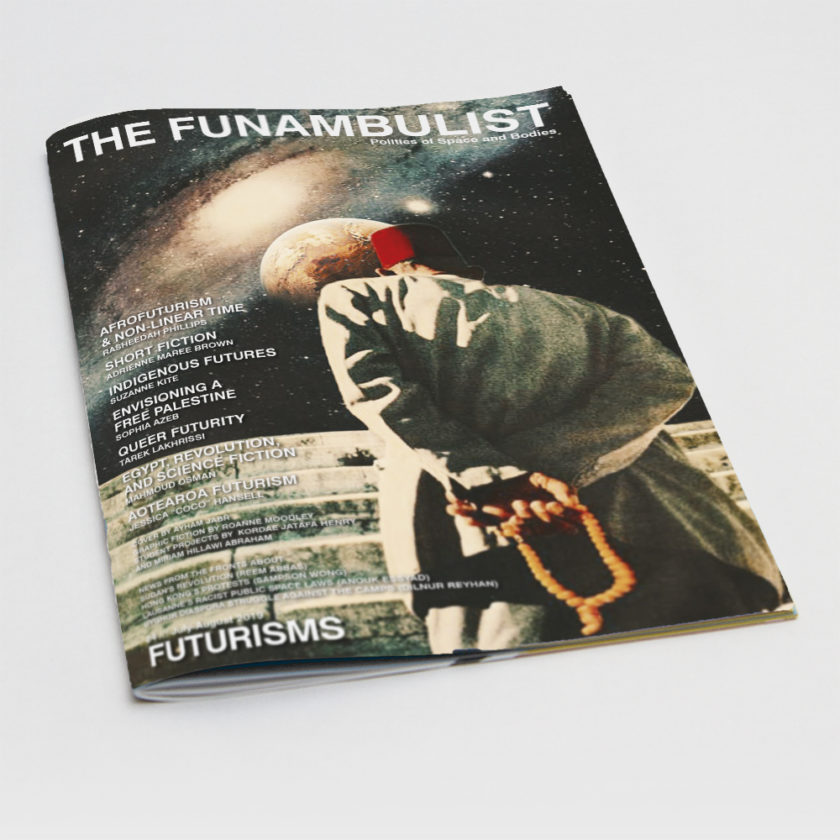 Imagining the future often appears as the luxury of those who have the time to do so. It is, indeed, a temporal battle and futurists like the ones featured throughout this issue have fought to gain the time to imagine futures where the political struggles of the present have significantly altered the trajectories of violence currently at work. Ayham Jabr offers us a powerful artwork, “The Guardian of Life” for our cover. Rasheedah Phillips shares with us Afrofuturist keys to “dismantle the Master’s clock” and the imperial notion of linear time. Sophia Azeb imagines what Palestinianness will be when Palestine is free. Suzanne Kite calls for a decolonial Indigenous Artificial Intelligence in the context of Turtle Island (North America). Mahmoud Othman reflects on how reality sometimes transcends (science) fiction, through the Egyptian Revolution that occurred one year after he published a novel dramatizing it. Jessica “Coco” Hansell provides a personal account on the Māori futures of Aotearoa (New Zealand). Tarek Lakhrissi, adrienne maree brown, and Melanie West all describe in their own way (through self-reflection, fiction, or drawing) the inherent futurities in queerness. Roanne Moodley tells us a story about “twinning” monuments between France and Reunion Island. Miriam Hillawi Abraham designs a video game offering a critique on how futurisms are at times used by self-serving actors. Lastly, Kordae Jatafa Henry dramatizes a vision of a personified Congo that has won its self-determination over the extraction of its precious resources.

These visions of the futures don’t always speak to each other; yet the generosity of their premises allow them to exist simultaneously with one another, even when they do not grow from what they learn from each other. They fundamentally part from “solutions” and reforms engineered by the technocrats of a system that pretend to address the violence, produced and capitalized on by itself. They refuse even, the premise of futures that would not be revolutionary, that would not ask for the moon or even place a Palestinian flag on it (cf. Larissa Sansour’s A Space Exodus, 2009). But futurisms are not always about hope. Their visions are not wishful thinking or dreamy fables about the possibility of “better” futures. They are instead a manifestation of tactical optimism; a constructivist envisioning that gives itself the means to exist through its very own formulation. Because, if it is true that “no change for the good ever happens without it being imagined first” as Puerto Rican poet Martin Espada (2016) writes, then our imagination must be seen as the political weapon that it is.

As usual, our News from the Fronts section takes on current political struggles in the world: Sudan’s Revolution (Reem Abbas), the Hong Kong massive protests (Sampson Wong), the fight of the Uyghur diaspora (Dilnur Reyhan), and the ambiguous relationship of the Swiss feminist strike with new racist laws in Lausanne (Anouk Essyad).