Thinking through the region shared by Pakistan, India, Kashmir, Nepal, Bhutan, Bangladesh, and Sri Lanka, above and below nation-states. 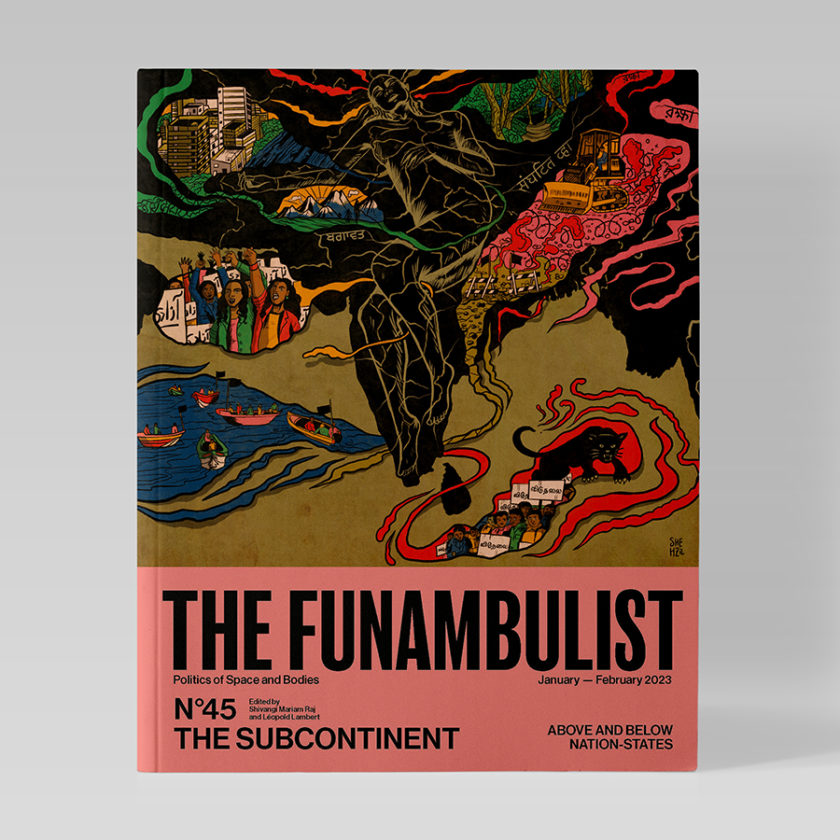 The Funambulist mainly operates thanks to its 2,870 (and counting) subscribers. If you like our editorial project, you can support us by taking such a subscription and thus make sure you’re always among the first ones to receive each new issue!

Welcome to this 45th issue, edited together by the two members of The Funambulist team: head of communications Shivangi Mariam Raj, and editor-in-chief Léopold Lambert. It features a few of the multitude of political imaginaries of the region formed by Pakistan, India, Kashmir, Nepal, Bhutan, Bangladesh, and Sri Lanka, above and below nation states.

This simultaneous movement can be summarized in two clear goals: the recognition of a geographical identity proper to the whole Subcontinent, as well as the distinction of a multitude of specific political movements throughout this large territory, regardless of the so-called national borders that fragment it.

The conversation between Ali Raza and Fatima Anwar deconstructs the monolithic narrative of the Pakistan state, and gives way to the epistolary exchange between Nilanjana Bhattacharjee and Veewon Thokchom reflecting upon the imposition of national borders by the exogenous states of India, Bangladesh, Burma, and Bhutan on indigenous territories of the “North-East.” This meditation on how bordering is coded in language is further strengthened by Zohra‘s photographs, which expose how India’s occupation machinery barricades time in the daily lives of Kashmiri people. Anushani Alagarajah reminds us that the Sri Lankan national narrative, in its Sinhala supremacy, would never make any room for Eelam Tamils, even in the midst of a simulacrum of revolution. Her demand for the frontiers of skies and the ocean to break open is echoed in Afreen Fatima‘s assessment of the gap between home and homeland for Muslims in India. In a critical refusal of the neocolonial projects in the Subcontinent, Richard Kamei chronicles a brief history of the resilience of Naga nationalism and Yemberzal draws maps of Kashmir in a way that colonial authorities have always prohibited.

The history of every nation-state is always contested by the memories and mnemonics of its margins. While Mehrub Moiz Awan reveals the multiple transphobic nationalisms operating in Pakistan today, Siddhesh Gautam documents a historic meeting between Dalit Panthers and members of the Black Panther Party to show us that despite casteist atrocities becoming a nationalist pastime in India, dreaming is always possible. In the same vein, Anu Muhammad and Parsa Sanjana Sajid have a detailed conversation on the construction of a massive coal power plant in the largest mangrove forest on the Earth, and how it threatens the many lifeworlds it hosts, cautioning us how none of these models of nation-states would survive if capitalist greed continues to inform their organized ecocide.

Since the last fourteen years, the erstwhile Himalayan kingdoms of Nepal and Bhutan have chosen a journey with democratic forms of governance. These fierce journeys have mostly been documented with dominant figures as their leaders. However, as Nepal Picture Library illustrates, women have been a fundamental part of these histories, and will continue to shape their shared futures, as Yangchen C Rinzin celebrates growing political representation of women in Bhutan. Finally, our conversation with Shobana Shankar asks open questions about the relationship of Dravidians with Blackness, and the solidarity links between the African Continent and the Subcontinent.

As for the cover’s artwork, it is created by Shehzil Malik. The News from the Fronts section is composed of two texts about queer and trans organizing in Monterrey, Mexico (Hafizah Augustus Geter), and about the intergenerational transmission of memory in Cuba and its diaspora (Marny Garcia Mommertz).