Continental lives and Anti-Colonial Struggles in the Arid, Plentiful Lands of the Sahara, the Atacama, the Gibson, the Kgalagadi, the Dhofar, and the Taklimakan deserts 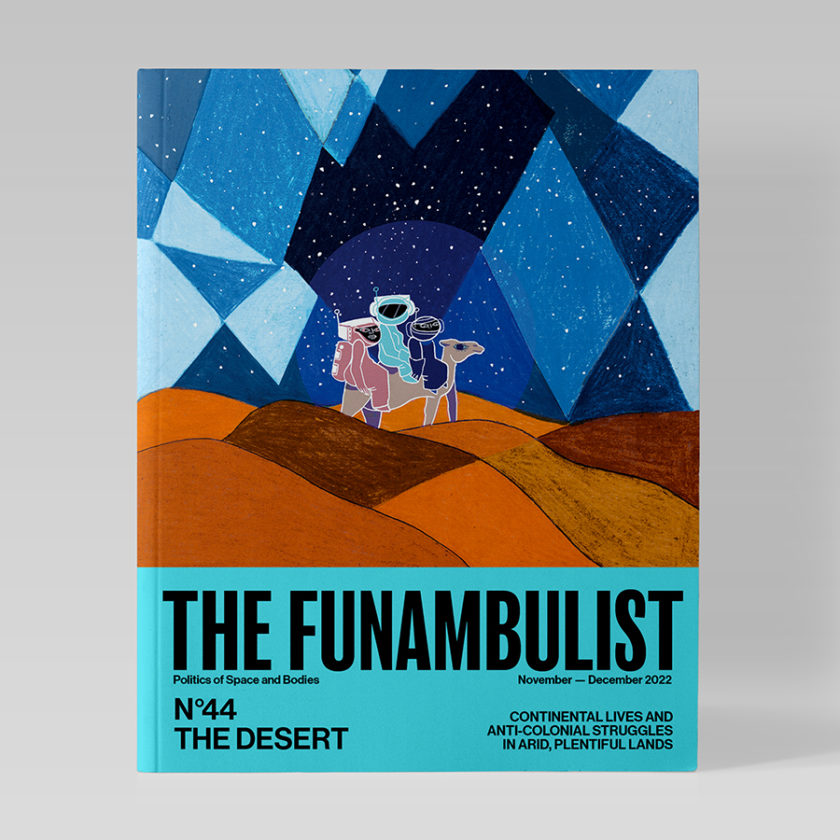 Welcome to the 44th issue of The Funambulist, which we are dedicating to desert epistemes and political struggles from its peoples. It is however important to problematize this very term “desert,” as it is fundamentally an exogenous (if not colonial) designation suggesting absence rather than presence.

Beyond this critique of this term, this issue is built on the intuition that there is a certain commonality between the living environments designated by it. This commonality might somehow be expressed as continentality, as a sort of response to what we had called “oceanity” in our 39th issue (The Ocean… From the Black Atlantic to the Sea of Islands, Jan-Feb 2022). To insist on this response, we commissioned Maya Mihindou to create the cover artwork, just like for issue 39.

As for the contributions themselves, they describe uranium extractivism as experienced by Touaregs in Niger (Maïa Tellit Hawad), the “invention of deserts” as colonial engineering and epistemecide against Nubian people (Menna Agha), the importance of the desert in Raul Zurita’s poetry against the Chilean dictatorship (Daniel Borzutzky), the impact of the life and death of Aboriginal artist Mr. Ward in the colonized Gibson desert (Jan Turner), forced Uyghur labor and the Han militarization of the Taklimakan desert (Lisa Ross), the nuclear bombing of the Algerian Sahara, the Turkestan, the Naqab, and the Gobi deserts (Samia Henni), Namibian revolutionaries’ farming communities in the Kgalagadi desert (Asher Gamedze), and the Dhofar Revolution as an alternative Arab history to the Levantine paradigm (Ahmad Makia).

This issue’s News from the Fronts are about the legacy of the 1991 anti-racist uprising in Brussels (Joachim Ben Yakoub & Baobab van de Teranga), the fight against the military coup in Burma (Me Me Khant), and Dutch colonial gentrification in Curaçao (Jermain Ostiana).