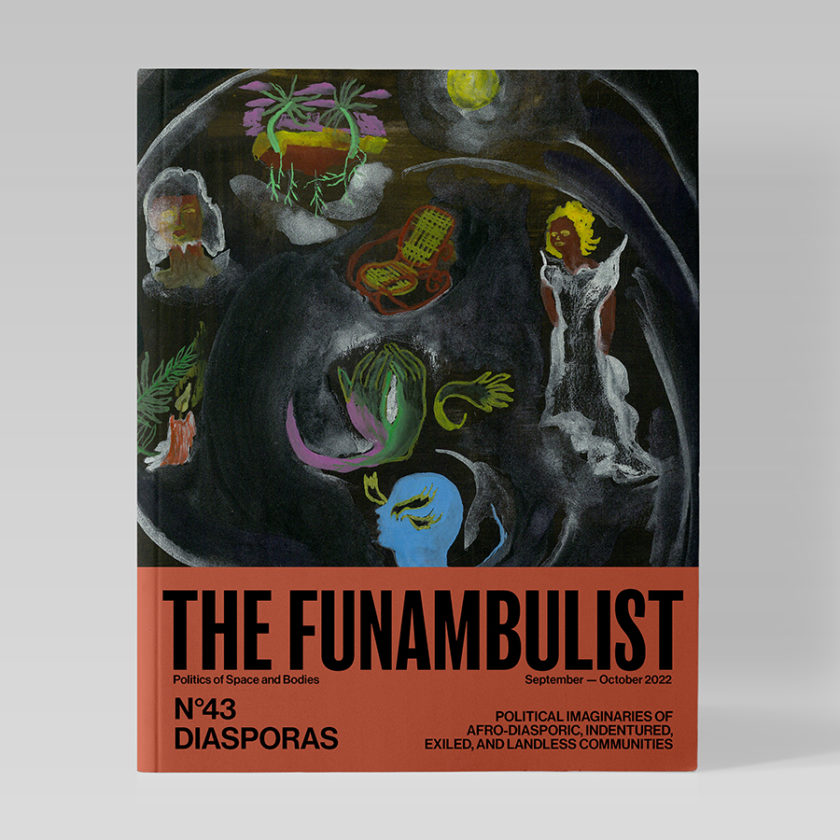 Until September 1st, we offer you the possibility to pre-order the print+digital version of our new issue, The Funambulist 43 (September-October 2022) Diasporas: Political Imaginaries of Afro-Diasporic, Indentured, Exiled, and Landless Communities. When pre-ordering it, you will receive your physical copy at the earliest, and will be given access to the digital version of the issue on September 1st, the day of the official release.

The Funambulist mainly operates thanks to its 2,750 (and counting) subscribers. If you like our editorial project, you can support us by taking such a subscription and thus make sure you’re always among the first ones to receive each new issue!

Welcome to the 43rd issue of The Funambulist, the first of the eighth year of the magazine’s existence. It approaches the diasporic question through various political aspects, from the asset they constitute in their respective national struggles, to the political imaginaries they can provide to the anti-racist Left. The issue particularly addresses the colonial formation of diasporas through enslavement (Atlantic Afro-Diaspora, Raphaëlle Red), indenture (Indian diaspora in Guyana, South Africa, Mauritius, and Fiji, Maria del Pilar Kaladeen, Sumayya Vally, Gitan Djeli, and Shivanjani Lal; Chinese diaspora in Polynesia, Karine Shan and Yiling Changues), or forced labor (Korean Zainichi in Japan, Hyewon Song). Refugeehood is also central to it and questions the diasporic role in struggles at home (Eelam Tamils in Western Europe, Abinaya Nathan), as well as the conceptualization of a “refugee settler” condition (Vietnamese in Guåhan and Palestine, Evyn Lê Espiritu Gandhi). In some cases, the idea of a “radical diasporism” is seducing, but important to nuance (Jewish diaspora, Ben Ratskoff). Cultural production, and more specifically music, is approached in a political manner to describe the diasporic condition (Cape Verdeans in Portugal, Sónia Vaz Borges and Flávio Zenun Almada). Finally, the metaphor of diasporas as constellations suggested by the cover’s artwork is brought to us by Inès di Folco.

To know more, you can read the issue’s introduction in open-access by following this link.