Celebrating the 60th anniversary of the Algerian Revolution and its internationalist solidarity with the Non-Aligned Movement, the liberation struggles on the African Continent, Ireland, Palestine, and Yugoslavia. 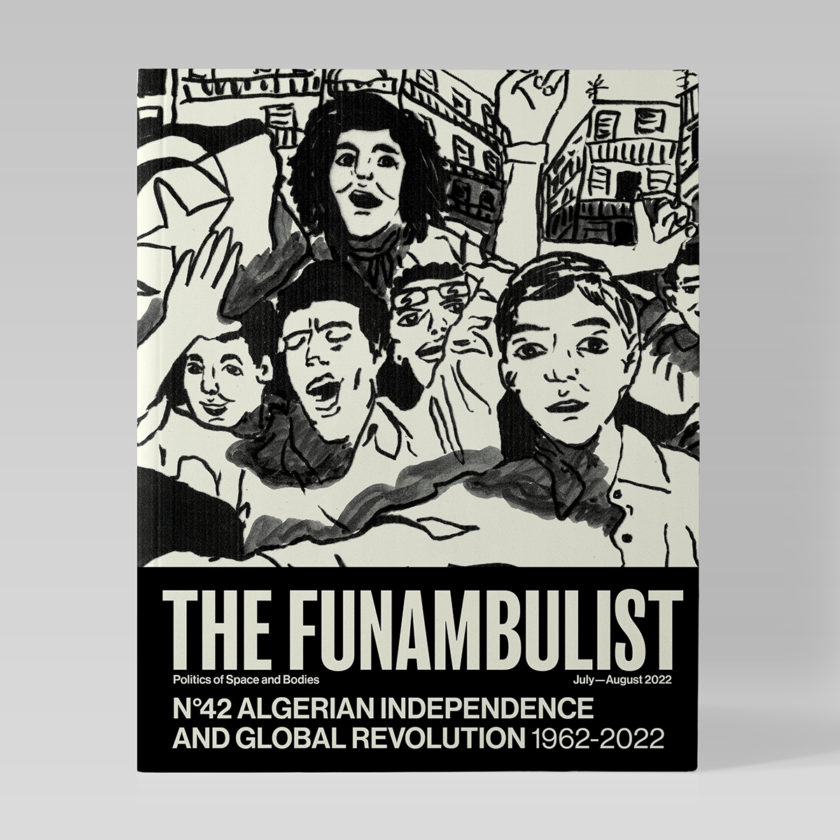 With this 42nd issue of The Funambulist, we are commemorating the 60th anniversary of the Algerian Revolution’s final victory against French settler colonialism Far from the Algerian regime’s official celebrations, we find the legacy of the Revolution in the three-year-old Hirak of the Algerian people, who face those who have become enamored with power in the decades following the country’s independence.

If you have been curious, but have often struggled to build an all-embracing understanding of the Algerian Revolution, our extensive interviews with Daho Djerbal, who was 17 years old in July 1962, and Malika Rahal, who recently published a book on the year 1962 in Algeria, will help you realize the significance of this anti-colonial struggle, not just for Algeria, but for the world. Following our commitment to internationalism, we’re also proposing texts about the internationalization of the Revolution (Samia Henni), Algiers as the “Mecca of revolutionaries” (in particular for African liberation movements) as seen through a child’s eyes (Annouchka de Andrade), and the politics of solidarity between Algeria and Ireland (Dónal Hassett), Palestine (Salah Badis), and Yugoslavia (Muriam Haleh Davis). As for the cover’s artwork, it was created by our dear graphic designer Walid Bouchouchi.

This issue’s News from the Fronts describe the fight for the liberation of West Papua from the land of the former colonizer, the Netherlands (Raki Ap), a recent history account on Russian colonialism (Anna Engelhardt), the “weaponization” of refugees in the Cyprus particular context (Olga Demetriou), as well as a powerful invitation to engage rigorously and respectfully with Black feminist work (Katherine McKittrick).

80 pages
Shippable anywhere in the world
Accessibility: the digital version of the issue contains alternative texts for screen readers