A Political History of the Ocean about the legacy of the Middle Passage, Black Internationalism, the fight against nuclear colonialism, and feminisms in Oceania, and poetic perspectives on the "Indian" Ocean from Zanzibar and Eelam. 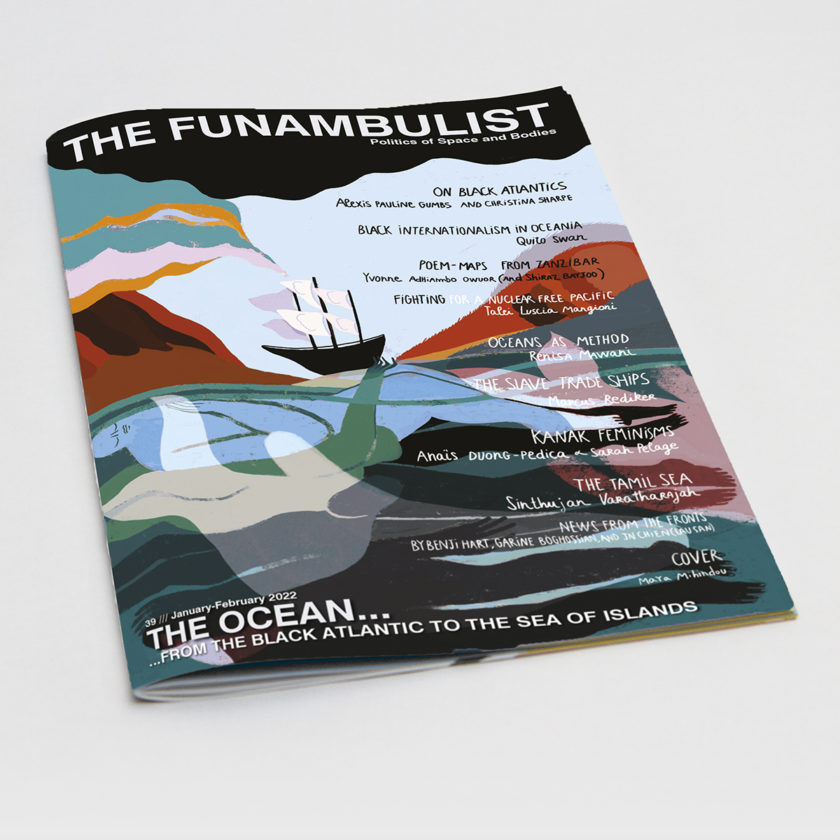 Welcome to the 39th issue of The Funambulist. As many readers will be able to tell, its subtitle pays homage to Tongan Fijian anthropologist Epeli Hau’ofa’s concept of “sea of islands” that designates Oceania, as well as to Paul Gilroy and his work on the “Black Atlantic” to whom we can add the many other oceanic thinkers and poets, from Martiniquean Édouard Glissant to Zanzibarian Haji Gora Haji (as emphasized in Yvonne Adhiambo Owuor’s contribution accompanied by Shiraz Bayjoo‘s artwork).

This issue’s cover was created by Maya Mihindou. It features a conversation about water, salt, bodies, and the Black Atlantics between Alexis Pauline Gumbs and Christina Sharpe, two analyses of the micro-societies hosted by ships (Renisa Mawani and Marcus Rediker), a long-format interview of Quito Swan about Black Internationalism from Bermuda and Africa to Melanesia (Vanuatu, Papua, and Kanaky) and Aboriginal Australia. Another interview with Talei Luscia Mangioni describes the transnational struggle against nuclear colonialism in Oceania. As for Anaïs Duong-Pedica and Sarah Pelage (accompanied by an artwork by Annabelle Wané), they articulate a short history of Kanak feminisms in the broader Oceanian context. The issue ends with a moving recollection of what was once the large Tamil Sea from Eelam to Java by Sinthujan Varatharajah.

This issue’s “News from the Fronts” talks about the noxious liberal approach to the Chicago Police Department (Benji Hart), makes the story of Armenian hero Monte Melkonian surge into the internationalist left’s imaginary (Garine Boghossian), and articulates the struggle against the two-headed imperialism of the U.S. and the People’s Republic of China (JN Chien – Lausan).