A special issue guest edited by Zoé Samudzi constructing a dialogue between genocidal histories in Zimbabwe, Brazil, Ethiopia, Korea, Namibia, the U.S., Artsakh and more... while critiquing the legal and political concept of genocide as calibrated on eurocentric criteria. 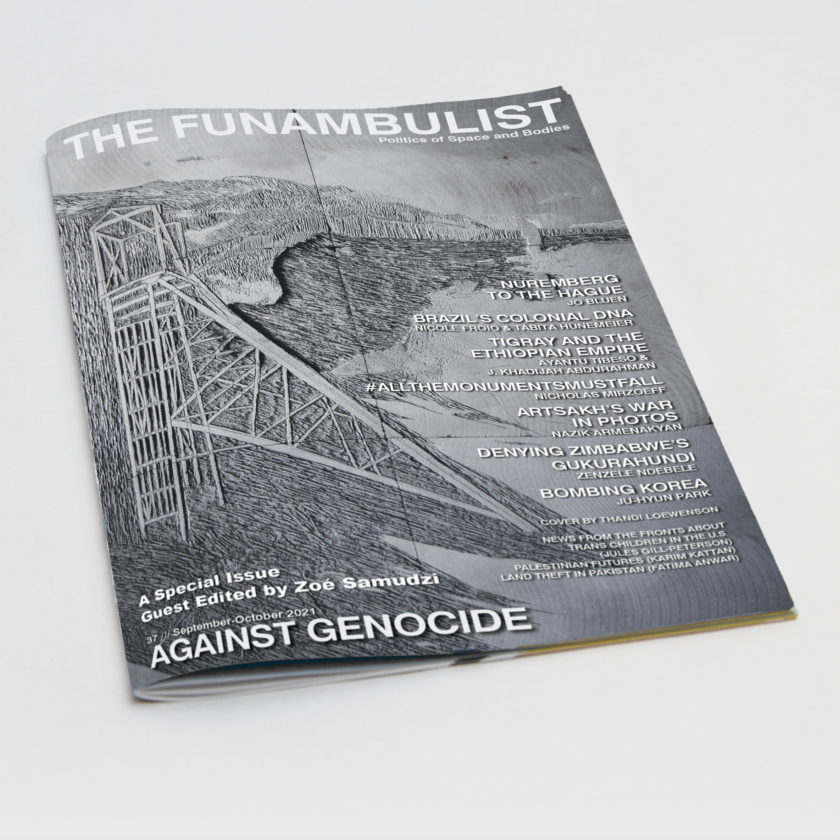 Welcome to the 37th issue of The Funambulist, which is a very special one as we invited Zoé Samudzi to curate and edit an issue on the topic of her choosing. As she presents in her editor’s note, the title “Against Genocide” and, with it its editorial line, constitute on the one hand a detailed argument against state’s murderous violence against a differentiated group of people, but on the other hand a critique of the legal and political concept of genocide itself as calibrated on eurocentric criteria. The issue thus mobilizes histories of massive state violence without falling in the trap of arguing that they should be considered as genocidal enterprises or not: the reminiscence of Ethiopian Empire in Tigray and Oromia (J. Khadijah Abdurahman & Ayantu Tibeso), the denial of Gukurahundi’s history in Zimbabwe (Zenzele Ndebele), the settler colonial and anti-Black destructive processes in Brazil (Nicole Froio & Tábita Hünemeier) and in the United States (Nicholas Mirzoeff), the U.S. massive bombings of northern Korea during the 1950-1953 war (Ju-Hyun Park), and the Artsakh war led by the Azerbajani army against Armenians (Nazik Armenakyan). The issue ends with a reflection on the tightrope walking path between Nuremberg and the Hague taking us to reparative futurities (Jo Bluen).

The issue’s cover is an artwork by Thandi Loewenson, invoking the history of colonial extractivism in Zambia.

The News from the Fronts section includes a text on the struggle for the lives of trans children (Jules Gill-Peterson), as well as a re-publication of two of our most recent Funambulist Correspondent texts about Palestinian futures (Karim Kattan) and land theft in Pakistan as colonial legacy (Fatima Anwar).