Throughout this conversation, we explore the multiple facets of Liam Young’s work for Tomorrow Thoughts Today (originally founded with Darryl Chen) and the Unknown Fields Division (with Kate Davies), his studio at the Architectural Association in London that took him to various expeditions around the world in order to document how our cities, in their infrastructure, extend far beyond their geographical limits and produce geological landscapes. As we discuss, the tentative does not consist in moralizing this production, but rather intervening within it as designers, often through (science) fiction that allows to problematize situations and to expand imaginaries. The last part of the conversation focuses on Liam’s work around drones and the exit process of technology from the military industrial complex and its potential emancipation.

Liam Young is an architect who operates in the spaces between design, fiction and futures. He is founder of the urban futures think tank Tomorrows Thoughts Today, a group whose work explores the possibilities of fantastic, perverse and imaginary urbanisms.  His projects include ‘Under Tomorrows Sky’ a science fiction movie set for a fictional future city developed through collaborations with scientists and technologists and ‘Electronic Countermeasures’, a swarm of quadcopter drones that drift through the city broadcasting a pirate internet and file sharing hub. He also runs the ‘Unknown Fields Division’, an award winning nomadic workshop that travels on annual expeditions to the ends of the earth to investigate unreal and forgotten landscapes, alien terrains and industrial ecologies. Unknown Fields have developed projects through expeditions from the Ecuadoran Amazon and the Galapagos Islands to far north Alaska, the mining landscapes of the Australia Outback, the Chernobyl Exclusion Zone and Baikonur Cosmodrome in Kazakhstan. (photograph by Pete Woodhead). See the Unknown Fields’ Funambulist contributor page.

CONTRIBUTION TO THE FUNAMBULIST MAGAZINE:
– “Photographic Section: Landscape of Colors,” in The Funambulist 6 (Jul-Aug 2016) Object Politics.

– Introduction to the Unknown Fields Division: 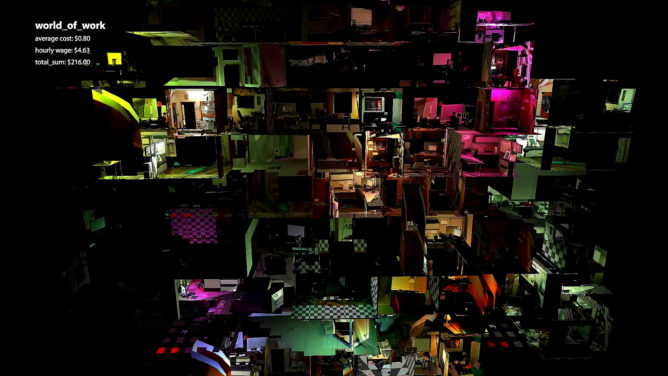 -LOOP>>60Hz: Transmissions from The Drone Orchestra / Performance at the Barbican Center by John Cale and Liam Young: