This conversation with Christina Heatherton and Jordan T. Camp evolves around the content of the recently published book that they edited, Policing the Planet (see below). By evoking the numerous interviews and articles of/by intellectuals and activists, we address the inherent violence of policing, as well as its specific politics in the United States through the “broken windows” doctrine and the character of William Bratton for instance. We also discuss about the various forms of resistance organized against the structural racism that the police enforces, including the abolition of the police altogether.

Christina Heatherton is an American studies scholar and historian of antiracist social movements. Her work appears in places such as American Quarterly and The Rising Tides of Color: Race, State Violence, and Radical Movements Across the Pacific, edited by Moon-Ho Jung (Seattle: University of Washington Press, 2014). She is co-editor of Policing the Planet: Why the Policing Crisis Led to Black Lives Matter (Verso, 2016), and author of the forthcoming book, The Color Line and the Class Struggle: The Mexican Revolution, Internationalism, and the American Century (University of California Press). She is an Assistant Professor of American Studies at Trinity College. See her Funambulist contributor page.

Jordan T. Camp is is an interdisciplinary scholar whose research focuses on the relationships between race, class, culture, political economy, social movements, and social theory.  He is the author of Incarcerating the Crisis: Freedom Struggles and the Rise of the Neoliberal State (University of California Press, 2016); co-editor (with Christina Heatherton) of Policing the Planet: Why the Policing Crisis Led to Black Lives Matter (Verso, 2016), and co-editor (with Laura Pulido) of Development Drowned and Reborn: The Blues and Bourbon Restorations in Post-Katrina New Orleans, by Clyde Woods (University of Georgia Press, forthcoming). He is currently a postdoctoral fellow in Race and Ethnicity and International and Public Affairs at Brown University. 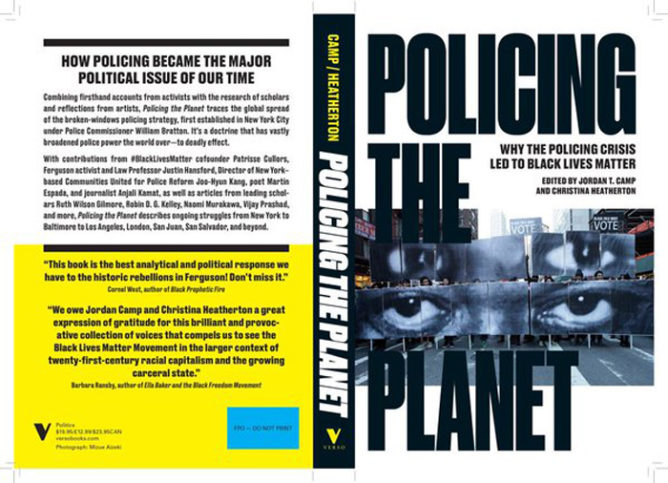