We begin this podcast with Bhakti Shringarpure introducing the online journal Warscapes that she founded. The discussion that follows emerges from an original unsuspected dialogue between two articles Bhakti and I wrote in Summer 2012, when Ansar Dine destroyed several Sufi mausoleums and precious manuscripts in Timbuktu. Bhakti had then put back into political and historical context and compared such “rage against the monuments” (see below) with the writings of Georges Bataille about the take of the Bastille, considered as the beginning of the 1789 French revolution. In my own article, I had attempted to show how both iconoclasts and iconodules are considered as such because of their deep fathoming of the monument’s symbolical power. We then discuss about other monuments’ destruction that might be read through a different post-colonial and/or emancipative ethics: the destruction of statues in particular. We finish this conversation with Bhakti explaining how the iconic power of monuments and space is often transmitted by wartime and post-war literature.

Bhakti Shringarpure is the editor in chief and co-founder of Warscapes (with Michael Bronner). She is a writer, translator and academic who received a BA in Literature from Bard College and a PhD in Comparative Literature from the City University of New York. She is an Assistant Professor in the English Department at University of Connecticut (Storrs). She focuses on literature emerging from civil wars in the aftermath of European colonialism with an emphasis on the period of the Cold War. Her books, Literary Sudans: An Anthology of Literature from Sudan and South Sudan (Editor, Africa World Press) and the English translation of Boubacar Boris Diop’s novel Kaveena (Co-translator, Indiana University Press) are forthcoming in 2015. See her Funambulist contributor page.

ONTRIBUTION TO THE FUNAMBULIST MAGAZINE:
– “Guest Columns: The Wold in Palestine, Palestine in the World,” in 6/// The Funambulist 6 (Jul-Aug 2016) Object Politics.

– Bhakti Shringarpure, “Rage Against the Monuments” for Warscapes (July 20, 2012)
– Bhakti Shringarpure, “Kitchen Anthropology in Gaza: An Interview with Laila El-Haddad and Maggie Schmitt” for Warscapes (June 1, 2013)
– Léopold Lambert, “Iconoclasts vs. Iconodules: Understanding the Power of the Icon,” in Studio Magazine: Icon (2012)
– Léopold Lambert, “The Guillotined Statue of Empress Joséphine in Martinique: The Incarnation of an Anti-Colonial Narrative,” for The Funambulist (October 3, 2013) 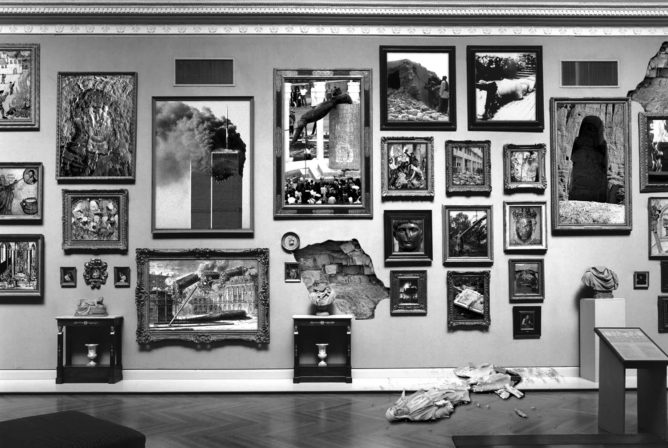