This conversation with Ana Dana Beroš — the last one of the Western Balkans series — addresses the two main migration routes to access “Fortress Europe,” the road through the Balkans, in particular through Croatia from where we recorded it, as well as the road through the Mediterranean Sea. We begin by describing the current means undertaken in Croatia in order to facilitate the route of refugees, as well as the obstacles encountered. In the second part of the conversation, we use Intermundia, the exhibition/book curated last year by Ana Dana to address the status of the Italian island of Lampedusa, considered as a European outpost in the migratory routes from North Africa. We describe, in particular, the former migrant detention center that Ana Dana was able to visit and document, and use this example to address architects’ responsibility in the violence of European immigration politics.

Ana Dana Beroš is an architect and curator, exhibition maker interested in creating uncertain, fragile environments and using empathic methods in presenting contemporary art and architecture, from infiltration to engagement. She has been recognised as an early-career architect and selected a finalist for the Wheelwright Prize awarded by Harvard University’s GSD in 2014. Her curatorial – research project on trans-European migration Intermundia received a Special Mention at the 14th International Architecture Exhibition Fundamentals, curated by Rem Koolhaas. Beroš is the Zagreb curator of Actopolis – Art of Action platform initiated by the Athens Goethe Institute, on a concept by Angelika Fitz (2015-2017). Ana Dana is the co-founder of the Zagreb group ARCHIsquad, a Division for architecture with conscience, and coordinator of its educational programs: Out of Focus: Architecture of Giving (2007-2008) and *urgentArchitecture, open advisory centres for citizens on how to ameliorate their immediate surroundings(2011-2015). She is one of the initiators of Think Space program of conceptual architectural competitions (2011-2015) and co-curator of its exhibition Competitive Hypothesis (Storefront for Art and Architecture, New York, 2013). Author of many exhibition designs, her latest project Tortureum is an experimental museum, a reminder of the history of torture and the invisibility of contemporary violence (Zagreb, 2015). Ana Dana is a former editor and a member of the advisory board of the Croatian magazine Oris (2007-2015), as well a contributing author for Croatian Radio within Reality of Space series of interviews on politics and poetics of space, with international architects, theorists and critics (2014-2016). 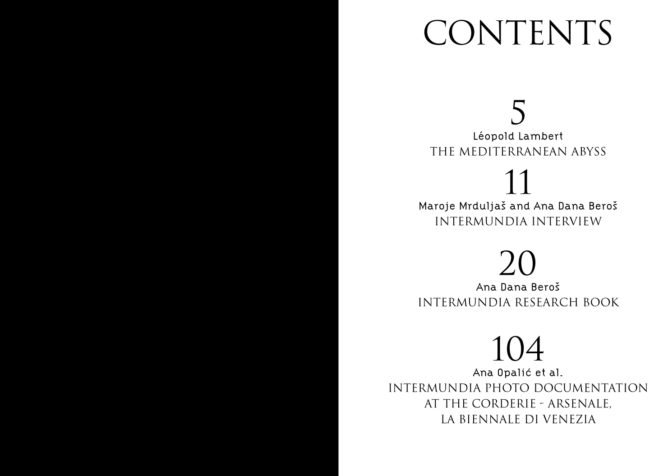 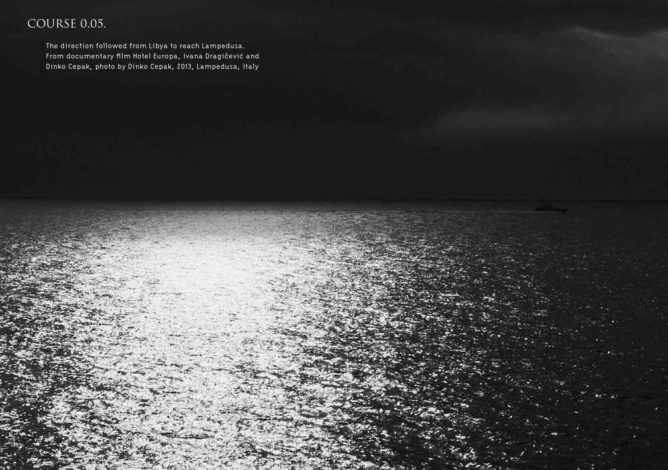 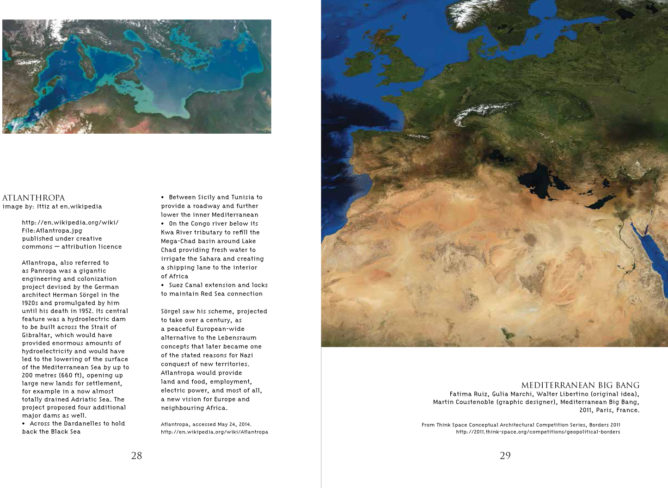 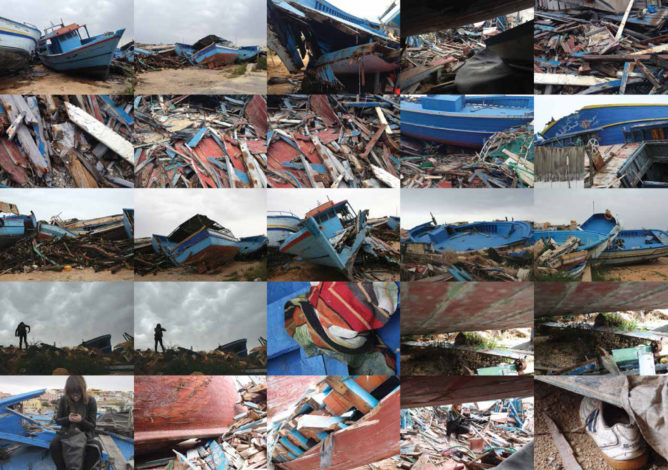 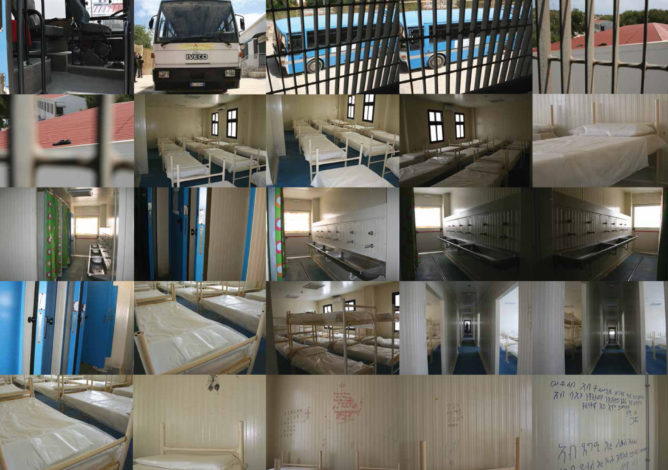 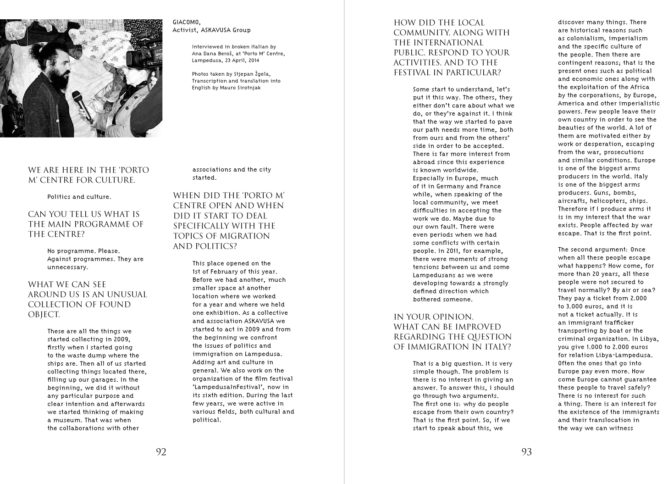 The majority of the crowd had already rumbled through the Biennale of Architecture when we visited Venice last summer, it was beautiful and the company was more than pleasant. The constelation seemed supernaturally good, as if nothing could disturb such condition. However, Ana Dana Beros’ installation Intermundia introduced an amount of uneasiness. Carried out perfectly, regardless of the minor bits, which she confessed in whisper and which absolutely no one would have noticed, the serious box was hiding in itself a confrontation with a very important matter.

Intermundia is entered individually. The visitor steps into the darkness of an elongated, uncomfortably narrow space in which temporary noise can be heard, implicating hard, even frightening moments that the immigrants go through as they, closed in ships’ subdecks, embark from the African continent towards the Old World. I could not accept the final flash at the end of the installation sequence as a possible sight for the potential immigrant to set his eyes on if the ship with which he illegally tries to reach the other side – the side of freedom, that offers choice and the possibility to go further, anything better than the former that remains unwanted – finally docks somewhere.

Can the unutterable be articulated through art? Someone else’s suffering, the amount of euros paid to reach that other shore, the debate taking place in all European milieux that admit immigrants – often unwillingly, for as we hear, the integration concept is unsustainable and there is no help to it – does all this belong to the culture context? Is Intermundia a travelling place that will enlight someone, enable (us) to renounce nationalism, political and racial discords, as well as the averseness to other religions and someone else’s god? Is this wooden box, equipped with technical devices, light and sound, a place of conflict or a place of consolation?

The abyss in which we can get lost, even if only during the two to three minutes-long sound and light loop, was transfered from Venice to Zagreb. There it stands under the shallow dome of the French Pavillion, a place that once, in one politically directed push, had been designed to become a museum of tolerance. Somewhere near the pavillion, I don’t know exactly where, a concentration camp was once situated – of course, the railway is near, and the functionality is what was aspired to in the era of the Independent State of Croatia (NDH)[i]. I did not like the idea of a place celebrating tolerance in a society that is miles away from it. And now, the awarded Ana Dana’s work reigns there, serious, lone, accompanied by documentation demonstrating the exstensive research she has done. Alongside the installation work a book was also published, in the unusual so-called French fold binding – with sheets of paper put together in a way as to adhere each other with their empty, unwritten pages.

The dominante aesthetics of the black and white design corresponds to the theme, and after a few introductionary pages the reader discovers the map of the Mediterranean. However, the map is somehow unusual, condensed, of a strange perspective that perhaps is not impossible for us to visualise, if imagined that the tectonic plates had continued to draw near. The map is the work of Sabine Réthoré, who rotated the sides of the world, displacing the north to the west, and so forth. Having omitted the country borders, she additionally “burdened“ us – to whom do we direct our mistrust, if there are no borders and those others become us?

The book does not consist of too much text. It includes an interview that was carried out over the course of several months, which we would expect to have had resulted in a far larger amount of words. However, Maroje Mrduljaš and Ana Dana Beroš did not talk execessively.

The book starts with an abyss, an introduction written by Léopold Lambert who recalls the Mediterranean abyss „that swallowed two millions of African bodies“ over the course of the three centuries-long slave trade. Surrounded with beautiful landscapes, the Mediterranean is considered to be the cradle of civilisations; at the same time it is also a tomb of milions of people who at one point wanted to change the course of their lives. But something was wrong with the navigation. The Mediterranean is an ˝imperial lake˝ and a territory in which militarised relations are being weighed. If we scale down the map, everything comes within hand’s reach – the conflict zones, the irreconciable nations, walls that are being built and later demolished. The distance between us and Thrir – Lybia’s dethroned dictator, or thousands of immigrants attempting daily to land somewhere, almost does not exist. Or does it?

The dryness of the realisation part of the project, if we’re allowed to call it so, arises from the fact that the immigrants, having reached the „foreign“ land, become subjects with no rights whatsoever. The majority is mostly uninterested in their identities (imagine only, to where has escalated the ˝body count˝ system of the period of the Nazi death camps), they only represent numbers for the politicians to make agreements about. We’ll admit a certain amount of immigrants if you admit a certain amount of immigrants. Situated in detention centers and refugee camps, with no privacy, no photograph albums, with nothing but a bundle of what is most necessary – that most probably will be confiscated later, for precautionary measure.

The culture, therefore, is not a cherry on the top of the history ‘cake’: it has always been a place of conflict where that history gains form and visibility in the very heart of decisions and actions, no matter how ˝barbarian˝ or ˝primitive˝ they may be.

Simon Schama noticed brilliantly that there is no such thing as innocent landscapes, and that every rock is compounded from numerous layers of culture, and also from demolition. The rocks of the Italian island of Lampedusa are beautiful, sharply cut above the sea on one side, until we reach the more tame little bays, which are easy to approach. Lampedusa is simultaneously a sandy beach and an inhospitable rock, the first filter one needs to cross, not to reach the other side, for it is questionable whether the crossing even exists and what is that other side. A small place in the Mediterreanean sea whose shores are the closest to Africa from where the refugees arrive, a place distant enough from the European land to remain unknown to millions of people. How do you introduce this issue to the culture space, to the visual field where it is neccessary to meet some other requirements?

It is unimaginable, therefore I have to imagine it, regardless of everything.

The tourist map of Lampedusa has marked nice panoramic viewpoints, where it is expected of you to arrive with a photo camera and take photos. Didi-Hubermann, whose thoughts from his work Écorces I quote in this text, took photos automatically in Birkenau, with no desire to pay attention to the frame. Do the watchtowers exist at Lampedusa? And what should we do if, while searching for that beautiful view and that perfect frame, we notice a group of men in a boat, exhausted from the sun’s heat, perhaps hidden in the boat’s inside, in conditions of which we wish to know nothing about? Can we stretch our view further away, beyond their perimeter, pretending that our point of interest is so distant that nothing except beauty can reach us?

The project Intermundia was presented at the Venice Biennale as a part of the exhibition ‘Monditalia’, in which the authors explored various aspects that define contemporary Italy. Beyond the populistic paradigms of design, that are well known to us all, beyond the unique values of urban landscapes and endless natural wonders, Ana Dana Beroš took her team further from all these general places. She transcended the borders of what we normally consider as Italy, she transcended the borders of commonplace topics and offered us the possibilty to ask ourselves about the world that is here. The world that is not second, nor third, but the only possible one, unattainable to many.

[i] Independent State of Croatia (Nezavisna Država Hrvatska, abbrev. NDH) was a World War II puppet state of Germany and Italy, etablished in parts of Axis-occupied Yugoslavia in 1941 and destablished on 8 May 1945, following the end of WW II.