“True accessibility, in my opinion, is when I don’t need to ask for assistance because the ramp is already put in place and is measured in accordance with government standards.” (Anne K. Abbott, Artist and disability rights activist)

The French Quarter, New Orleans’ most historic district, has a 300-year-old relationship with division. These fractures begin with the ecological separation between city and swamp that determined New Orleans’ geography, to colonial divides and the segregated racial occupancy of Jackson Square and Congo Square, as well as the 1960s battles between historic preservationists and modern urban highway initiatives. In this contemporary map of the French Quarter, the solid/void graphic dichotomy inspired by Giambattista Nolli illuminates another kind of division: the current state of segmented physical accessibility around St. Louis Cathedral and the surrounding streets and historic buildings.

Nolli, in his 1748 map of Rome, provided a foundational tool to articulate partitioned space when he rendered the open public spaces of Rome as void in contrast to private space, depicted with a solid hatch. Applied here, businesses whose entrances have stairs and no visible ramp have been darkened, as their contents are unknowable to a traveler who uses a wheelchair or assistive walking device. All curbs have been marked by a thin dark line to indicate required circulation for the traveler unable to surmount the protrusion. In the United States, a business’s size determines what “reasonable action” must be taken to remove “architectural barriers,” as codified by the American Disabilities Association (ADA). The ADA, established in 1990, set out to create standards for equal access to transit, employment, public space, and private business to ensure rights to civic participation and purchasing power. To defer costs, small businesses often use portable ramps or curbside services to overcome these architectural barriers, rather than actually removing the barrier itself. Though portable ramps may be on offer, asking for permission presents a social barrier to entrance. The ask precludes anonymity, reducing the ease of entrance, adding pressure to make an economic exchange. Further, a verbal ask may mean that hearing/speech-impaired and non-verbal patrons may be misunderstood or ignored by employees not versed in alternative forms of communication.

Currently the U.S. administration is furthering a legacy of government-sanctioned exclusion rather than expanding reaches of the ADA. In February 2018, the House amended the ADA Education and Reform Act under the guise of curbing frivolous lawsuits, placing the responsibility of enforcement on people with disabilities. Under this amendment, if an individual is unable to enter a business is it their responsibility to provide written information to the business about which of their civil liberties is being violated, all but eliminating motivation for businesses to comply in advance of such a complaint. The Consortium for Citizens with Disabilities, an almost 250-member disability rights organization, wrote in response that this change would “create barriers to the civil rights for persons with disabilities that do not exist in other civil rights laws.” (Consortium for Citizens with Disabilities, 2017.) Ultimately, this bill undermines the codified spatial legislation that supports people with disabilities and places excessive burden on citizens already being subjected to discrimination.

Nolli’s solid/void dichotomy points to how the removal of barriers by the ADA’s “readily achievable” standard is a fallacy for patrons with disabilities. For many shoppers and travelers using a chair, businesses that identify themselves by their step are making a point of darkening their doors. 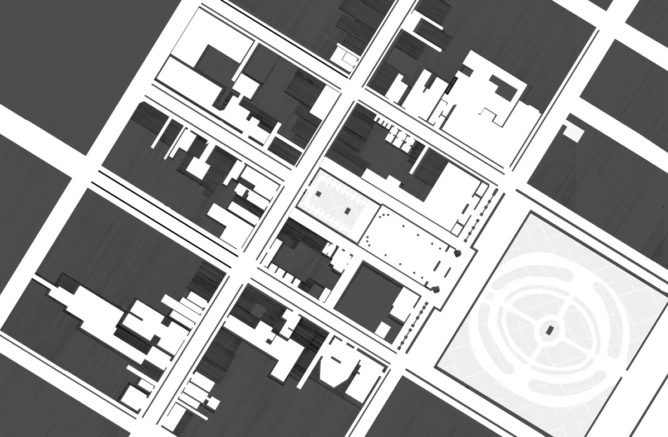