In her Spring 2017 CUNY Graduate Center course, entitled “Police Prison Pollutants,” professor Ruth Wilson Gilmore asked students to create atlases illustrating the intersecting impacts of police, prisons, and pollution in various United States cities and the regions surrounding them. Our work in the course was inspired by scholarship and activism founded in the recognition that policing, prisons, and pollutants are all forms of environmental hazards that operate together to produce concentrations of premature death in the “places where prisoners come from and where prisons are built” (Gilmore, 2008). We also used Rebecca Solnit’s and her colleague’s trilogy of atlases — entitled Infinite City: A San Francisco Atlas (2010), Unfathomable City: A New Orleans Atlas (2013), and Nonstop Metropolis: A New York City Atlas (2016) — as guiding examples of imaginative cartographic practices.

Focusing on the state of Georgia and its capital city Atlanta, I worked to map out relationships between police violence, incarceration, and environmental
pollution. The first map shows incidences of police killings (red dots) in Georgia in 2016, along with the self-reported home counties of people who became incarcerated in Georgia’s state correctional system in 2016. The map highlights the stark reality that police officers kill people primarily where it is most common to send people to prison.

It may be tempting to see in this map a relationship of causality that deems police killings a product of mass incarceration. However, Ruth Wilson Gilmore urges us to see the problem the other way around. As Gilmore (2015) contends, “many people respond to […] high-profile police killings by thinking: ‘They can kill us because they can lock us up.’ But I think it goes the other way: they can lock us up because they know they can kill us, because they can kill with impunity.” In other words, mass
incarceration is a product of already-existing fatal geographies, which produce premature death among primarily poor people of color as a result of overlapping concentrations of pollution, policing, unaffordable housing, exclusionary school policies, and other injustices.

For example, in metropolitan Atlanta the counties that send the most people into Georgia’s state correctional system are also hotspots of environmental injustice. These counties include Fulton, Clayton, Cobb, DeKalb, and Gwinnett counties. The second and third maps, respectively, show the metro Atlanta home counties of people who became incarcerated in Georgia’s state correctional system in 2016 (a scaled-down version of the first map), and concentrations of environmental justice hotspots in metro Atlanta counties. The maps — which look strikingly similar — illustrate how the prison system combines with and exacerbates the effects of environmental pollution particularly among poor, nonwhite people.

The second map illustrates the metro Atlanta home counties of people who became incarcerated in Georgia’s state correctional system in 2016. One-third (33.62 percent) of people who were admitted into a state correctional facility in Georgia in 2016 reported one of the above metro Atlanta area counties as their home county. Among these counties, Fulton, Clayton, Cobb, DeKalb, and Gwinnett counties sent the most people into Georgia’s correctional institutions.
The third map shows concentrations of environmental justice hotspots in metro Atlanta counties. Environmental justice hotspots are defined here as “blocks that contain the most pollution points, poorest economic conditions, highest linguistic isolation rates, and/or the largest minority populations in the metro Atlanta region. To qualify as a hotspot, the block must fall in the top quantile (1/5th) for both pollution points and overall demographic characteristics in the region” (GreenLaw, 2012). Pollution points include air pollution sites, water pollution sites, hazardous waste inventory and storage sites, landfills, Superfund sites, toxic release inventory sites, and locations cited for environmental violations.

Together, these three maps illustrate how environmental pollution combines with the impacts of policing and prisons to produce a geographic concentration of premature death in poor communities of color. By highlighting often-concealed relationships embedded in place, maps such as these can help to expand our analyses and organizing efforts around issues like policing, incarceration, and environmental pollution. Knowing how it all works together helps us to better know how to pull it apart. 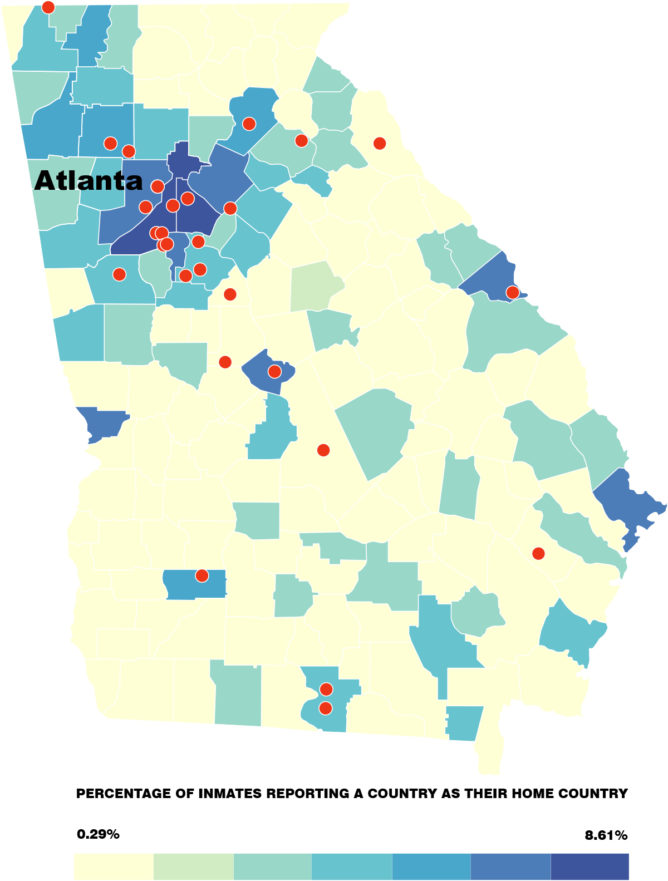