The Atlas of Legal Fictions plays a unique role in the world of map making — depicting a unique condition that is both a physical reality and symbolic space within our urban realms — the Jewish Eruv.

Unknown to most, the Eruv (literally “mixing/mingling”) is a defined physical area symbolically extending the “home” beyond its walls into the community. Acknowledged as a “legal-fiction,” the Eruv transforms space, providing leniencies to Orthodox Jewish communities by creating symbolic private realms within public urban space, allowing the performance of daily activities otherwise forbidden on the Sabbath. Laws written into the Talmud forbid any type of work on the Sabbath, including carrying, transferring, or pushing objects, such as a baby carriages or wheelchairs within the public domain. Limiting in many ways for the community, especially women who care for their children, the Eruv loop hole was established as a kosher practice to allow people to carry books of prayer, or push baby carriages outside the home without breaking religious law. How? Through the construction of a boundary in the public domain, a defining edge of community that symbolically acts as a communal wall for a shared privatized space — an extension of the home into the city.

Jewish communities build these boundaries themselves, establishing them through proposals, negotiations, and a lease signed with the city. It is a privilege given by the city and a physical space designed by people, not architects. The boundaries are designated by elements such as existing walls, natural boundaries — rivers, roadways, etc or made of commonplace materials like fishing line combined with telephone and lamp posts, fences, gateways, etc. The Eruv blends into its surroundings, attaching to the existing fabric of the city, encompassing portions, or even entire cities, yet remaining virtually invisible to those unaware of its symbols. Although established as a religious practice, the Eruv is urban in every way.

Although it is intended to facilitate Orthodox Jews specifically, it does not eliminate others from being part of the designated space. The consequence is an open, permeable boundary that establishes community, maintains tradition, and yet allows interaction with new environments and other cultures. It is both spatial and social in its existence, a true place of “mingling” between public and private, old and new, the traditional religious practices of one culture, and the modern urban fabric of contemporary cities.

The Atlas of Legal Fictions is an architectural cartographic analysis of these spaces — an account of these community boundaries illustrated by mapping and interpreted through stories, photography, and drawing in hopes to acknowledge the multiplicity of spaces and readings present in cities. Each map shows the useable space of a community, redefining an edge to urban space and communities. The first of its kind, this atlas brings together data to create original scaled maps of these community boundaries in numerous cities, documenting the 250+ Eruvin (plural of Eruv) that have been found to date. As a part of the mapping, I travelled to many of these communities, walking the edge of their boundaries to understand the intricacies and nuances to their symbolic community space. The Atlas of Legal Fictions exposes the factual existence of what is considered fiction in the modern world. 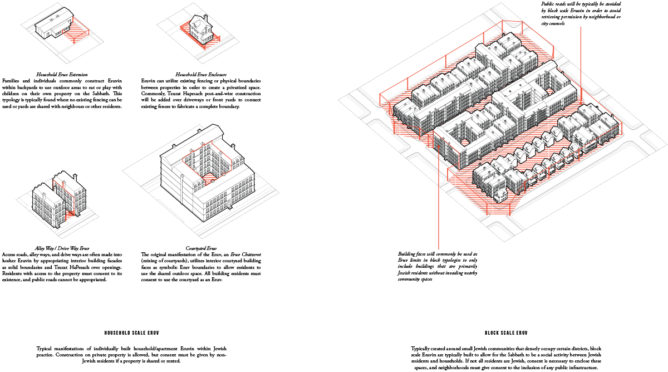 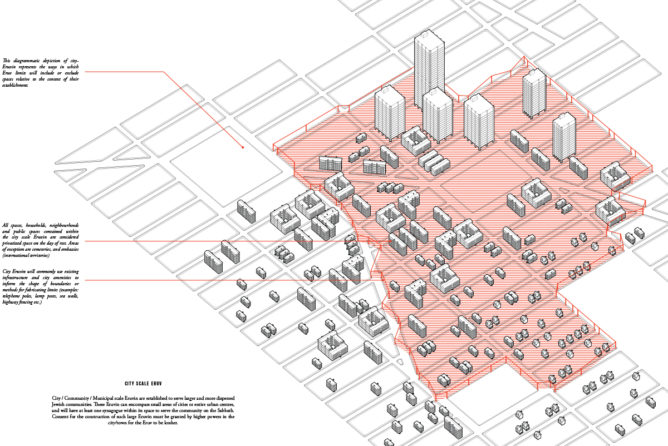 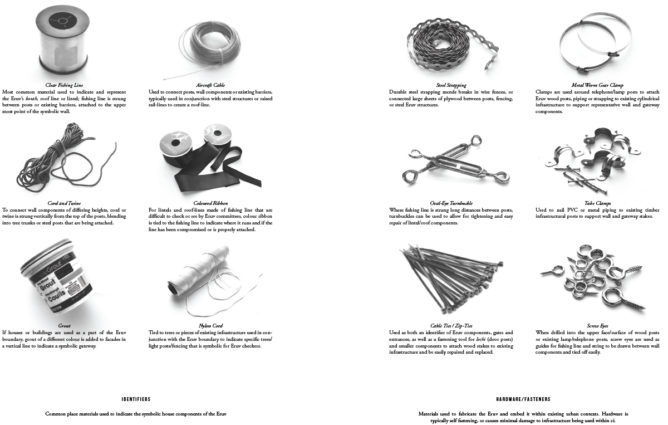 The material quality of the Eruv is unspectacular and simple: most of everything used can be found at the local hardware store. These common place materials are bestowed with a new symbolic meaning, but to the untrained eye, blend into the city-scape. 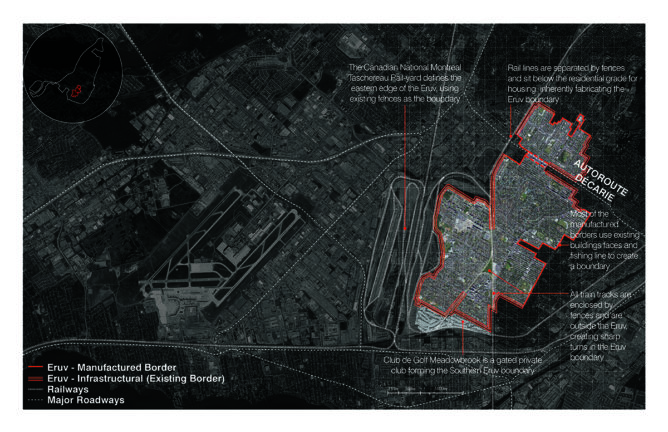 Influenced by the railways running through Côte Saint Luc of Montreal, the Hampstead Eruv utilizes the inherently impassable infrastructural lines of the city to form its boundary. The Eruv bends around the Canadian Pacific Railway Côte Saint Luc Rail Yard, utilizing the fencing put in place to separate the industrial district from the neighboring residential communities. The remainder of the Eruv follows the same language of utilizing barricades and city fences to manufacture the Eruv space. 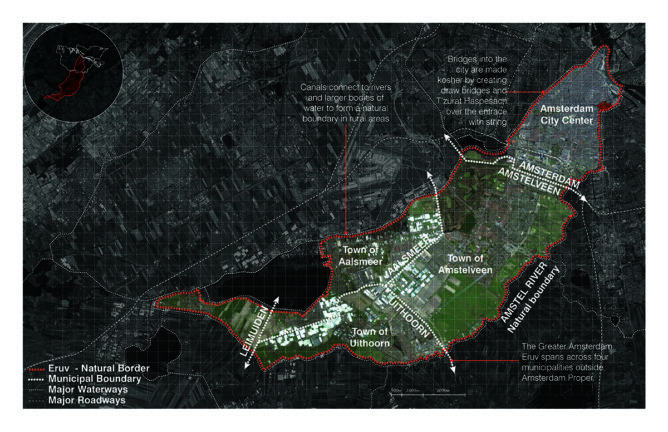 In 2008, a new Eruv proposal was set forth in Amsterdam, not to make use of the man made infrastructure of the city, but to focus primarily on the natural advantages present in the Amstel River, IJmeer Lake and canals. Using the waterways, the Eruv required very few additions to be halachically approved, and could span beyond Amsterdam proper into further reaching rural areas. One of the largest Eruvin, the Greater Amsterdam Eruv was able to eliminate costs and risk of damage by using natural borders. 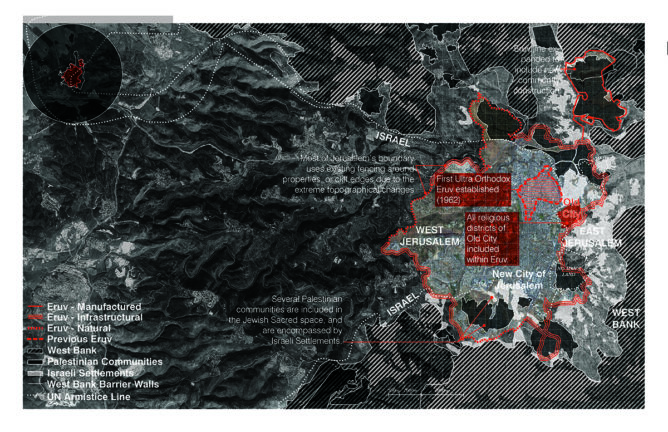 Every city in Israel maintains their own Eruv to serve the large Jewish Orthodox population, but Jerusalem’s Eruv is inherently the most politically charged. The Eruv in Jerusalem indicates the tensions present in the region, and the territorial methods of occupation. The Eruv encompasses the Holy City, all the religious quarters included, parts of East Jerusalem, secular Jewish communities, and Palestinian Communities and territories. The Eruv, although hardly visible, reflects the territorial conflicts across the land.