In this article, Aya Nassar shifts the focus from Tahrir Square and other iconic places of the Egyptian revolution. Dissecting the anatomy of the 6th of October Bridge and its history, she gives insights of an often less discussed, yet major event in the memory of Cairene protestors.

For better or worse, the “Arab Spring” provided a shorthand image for Cairo, and Tahrir, for a while after 2011, reigned as its spatial icon. Geographer Derek Gregory, for instance, wrote in 2013 that Tahrir Square was “the most iconic site of all these tumultuous events” meaning the Arab Uprisings, and even more commentators gravitated towards the square’s enigma. However, for many who witnessed the battles of the 18 days, the spatial icon of the revolutionary moment was not necessarily the square, but rather the burning of the nearby building that housed the headquarters of the National Democratic Party (NDP), the ruling party in Egypt. Interestingly, when the headquarters of the ruling party burnt, the picture that captured its enigmatic torching also caught traffic beside it on the 6th of October bridge. In Cairo, even in the middle of a revolution, one is likely to be caught in traffic on a bridge.

That NDP building and its adjacent bridge act as a spatial marker. The building has been a staple postcard image from the bridge for the past few decades. Its burning might not have had the same international standing of icon-making as the square. It was burnt during the internet cut-off on January 28, 2011 and it has never been made clear who actually burnt it. However, the image that dominates the imagination and memory of a lot of Cairenes, whether they were part of the 18 days or not, is passing by the dominating building that overlooks the Nile with a charred façade on their necessary commute over the bridge. This charred building only remained for a few years until it got demolished altogether in 2015. But until then, the physical and material engraving of January 28 on its façade was impossible to avoid or ignore. Currently, it is simply one of the many vacant lands in the heart of Cairo, situated adjacent to the iconic Tahrir Square. 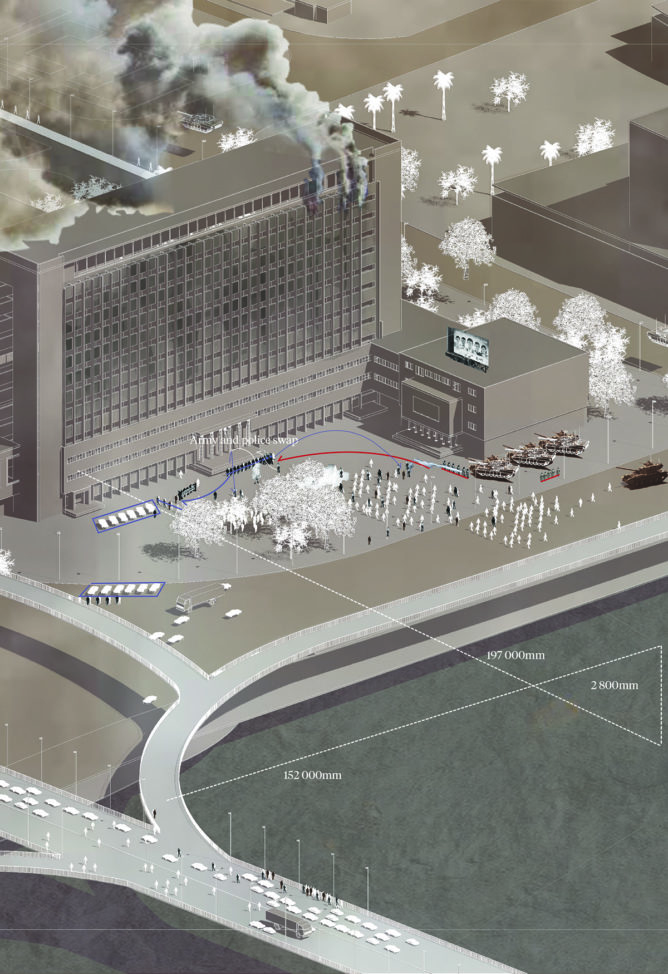 The building is also an important temporal marker. In 2011 the building was torched, arguably, by protestors on January 28, the Friday of Rage. While January 25, and other days from the 18 days of the Uprising are well documented, January 28 remains for many the key victory point. It might be worth remembering that protests, indeed, started on January 25, but were in constant confrontation with the police and central security forces. It is only on Friday January 28, that the dynamic of conflict changed and protestors were able to appropriate the space by forcing the security forces to withdraw completely from the streets and public spaces. After this, the occupation of the square became possible (although not totally devoid of violence as the further battles continued such as the infamous battle of the camel and the sexual harassment).