For the last three decades, the Korean survivors of a colonial system of sexual enslavement have been fighting to demand reparations from Japan. As Stephanie Kyuyoung Lee contends in this text, the urgency of this struggle cannot be understated as only 20 survivors are still alive today.

Article published in The Funambulist 27 (January-February 2020) Learning with Palestine. Click here to access the rest of the issue.

In this context, “comfort women” refer to women of various ethnicities and ages (ranging from Chinese, Dutch, Korean, Malaysian, Philippines, and more) who were trafficked to rape camps throughout Asia by the Imperial Japanese Army during the Pacific War.

On August 3, 2019, the Aichi Triennale art festival in Japan was forced to close over backlash against the inclusion of Statue of Peace (2011), a tribute to “comfort women” and their long history of activism. The Japanese Government’s Agency of Cultural Affairs then withdrew a $700,000 grant, citing procedural inadequacies. The art show’s closure drew much media attention due to its topic on artistic censorship and freedom of expression in Japan. A few weeks later, the exhibition re-opened for three days with heavy security measures, and the South Korean statue remained a key work of the Triennale. Japan’s public outrage against the sculpture is part of an ongoing effort to remove the dozens of Sonyeosang (소녀상) erected around the world. These spaces of commemoration are also sites of contention. They represent Japan’s systematic erasure of colonial history and imperialist exploitation.

The bronze statue depicts a young woman in Korean garment sitting next to an empty chair, staring straight in defiance. Funded by private donations, this peace monument was first installed in front of the Japanese Embassy in Seoul in 2011, and has since been replicated globally. The Japanese government has gone to great lengths to challenge the legality of land and property rights to justify their global quests for removal of the memorial statues. In 2017, after a three-year legal battle, the Supreme Court denied an appealed case against the city of Glendale seeking the removal of the statue, filed by two Japanese-Americans and a right-wing revisionist history organization. Subsequently, the mayor of Osaka threatened to end their sister-city status with San Francisco as the city decided to designate the memorial as city property. In 2018, a Japanese representative was caught on camera kicking a comfort women memorial for Taiwanese survivors in Taipei after attempting a request for removal. Grassroots efforts are challenged by legal tactics filed against North American city governments on grounds questioning the constitutional rights of local governments to interfere with foreign affairs. The global network of monuments has become public spaces where grassroots efforts of advocacy are met with foreign political agendas.

The term comfort women is derived from the Japanese word ianfu, meaning “prostitutes.” The very nature of this lexical designation undermines and transmutes the forced nature of systematic sexual slavery. The majority of the women were Korean and Chinese who were often deceivingly recruited for education and waged colonial labor, or outright abducted. It was not until decades later that women came forward with testimonies detailing the atrocities committed at what is now described as “comfort stations.” It is now estimated that 200,000 women were trafficked, and those who survived experienced various prolonged health deficiencies such as sexual diseases, malnourishment, unsafe pregnancies, and suicide. Yet, the Japanese government denies the forced nature of militarized sexual slavery and therefore refuses to issue an official apology and reparation fund for the survivors.

Following the end of the Korean War in 1953, rapid economic development and U.S. global politics caused the nation to repress colonial memories. Trade agreements and peace treaties between Japan and the Allied Powers favored economic cooperation while granting immunity from prosecution. The truthful accounts were never  released to the public until 1991 when Kim Hak Soon halmoni (Korean for “grandmother” but often used as an overarching term to relate to the survivors) exposed her past as a former “comfort woman.” The aging survivors are the leading political actors for galvanizing the movement, and their memories are an active agent in garnering local and global interest. After decades of silence, Kim halmoni started a movement of empowerment, that led to many former “comfort women” coming forward.

The colonial legacy of “comfort women” means patriarchal subjection to guilt and shame. While the issue itself poses a clear human rights violation, the political economy, history and cultural misogyny of South Korea complicates institutional support for “comfort women” activism. Rooted in feminist activism, the Korean Council for Women Drafted for Military Sexual Slavery by Japan is the lead advocacy group for the survivors. The organization has often coordinated weekly demonstrations with the House of Sharing (Nanum-ui Jib) in front of Seoul’s Japanese Embassy since 1992. Numerous local NGOs formed initially to aid with locating survivors, and they continue to provide medical and social support for the survivors’ well being. Faith-based institutions have also been at the forefront of establishing resources for “comfort women.” In 1995, through the financial support from Korea’s largest Buddhist order Chogye, the House of Sharing was established. The House of Sharing is a social welfare facility and serves as a permanent residence for several survivors. It was later joined by the Japanese Military Comfort Women History Museum in 1998. Funded by private donors, the House of Sharing and the museum are pilgrimage sites for activists, whereby the act of visiting the residential space and meeting the residents has led to centering stories of survivors in the movement.

The residents from the House of Sharing are the most regular attendees of the famous Wednesday demonstrations. Public attention and immediate action were the prime objectives of the early demonstrations, where former victims were transformed into activists and political actors. As the longest-running public rally, these street demonstrations have been conducted every Wednesday for the past three decades. Nowadays, halmonis and their family members, activists, and students are regular members of the scene at noon on Wednesdays, huddling around the Statue of Peace in front of the Japanese Embassy. In 2011, as I attended the Wednesday demonstrations celebrating its 1,000th protest, the small plaza was filled with grief and even shame as it represented the prolonged fight for the aging survivors.
Part of the continuing attention is linked to the emotional ties produced by invoking images of elderly women as grandmothers (halmoni), mothers, and daughters of the nation. They speak to the public as marginalized subjects, yet challenges the traditional image of femininity in Korea as they openly defy the patriarchal forms of governmentality. The women have been able to incorporate emotional dimensions into their activist framework as a strong backbone for their legacy. While the image of the former “comfort women” is deeply embedded with the locality of the place, at times it transcends space as weekly demonstrations are simultaneously held in front of various Japanese Embassies in multiple countries. The site-specific demonstrations are able to spread and be reproduced by activists in similar sites. As living monuments, the women’s presence in front of the Japanese Embassy has become a symbol of “comfort women” as post-colonial trauma in the public realm.

In October 2010, a memorial plaque for “comfort women” was erected outside a library in Palisades Park, New Jersey. Since then, over ten “comfort women” memorials have been erected in North America, five of them being the Statue of Peace. Korean-American cultural productions such as novels, artworks, and sculptures on “comfort women” have been a site to debunk the racialized, sexualized Asian-American experience. The survivors’ stories have certainly evoked Korean nationalism in a transnational setting. However, while raising emotional connections, the cultural productions also lead to conjuring the “comfort women” experience as “the other.” Including the “comfort women” in the production of Asian-American vernacular memory carefully poses questions of appropriation and commodification of the trauma. Nevertheless, the involvement of Asian American activism represents the “comfort women” issue as a transnational one and break down national boundaries while offering a different outlook on the highly politicized issue. Asian-American efforts to reproduce social trauma transform the meaning of “comfort women” into a placeless, timeless issue and the survivors’ accounts become a social memory within the Asian diaspora. However, these efforts are challenged by the Japanese government’s continued attempts to file for the removal of the statues globally.

Recently, a heavily criticized $ 8.8 million relief fund fell through as the South Korean government failed to reveal the terms of the agreement, which included a request for the removal of the statue in front of the Japanese embassy in Seoul. The Japanese government made it clear that it was set up as a “donation-based charity,” not a legal reparation fund made in official acknowledgment of the government’s involvement. Rhetorics of historical amnesia continued as the two governments stressed the need to create a “future-oriented relationship” between the two countries.

There is a sense of deep urgency in seeking recognition for the living survivors. Only 20 of the 239 officially registered Korean survivors are now alive. After three decades of transnational activism, the memories of rape and violence of the former “comfort women” have been revisited countless times. The public memory of “comfort women” has since become a globalized entity, leaving its original site to produce meanings of its own. The memory of trauma has formed a political organism as it unavoidably invokes post-colonial conflict in and beyond the Korean Peninsula. In this sense, the Statue of Peace represents an act of grassroots resistance against global and institutional politics, to remain in the public eye and claim space for an otherwise forgotten history. ■ 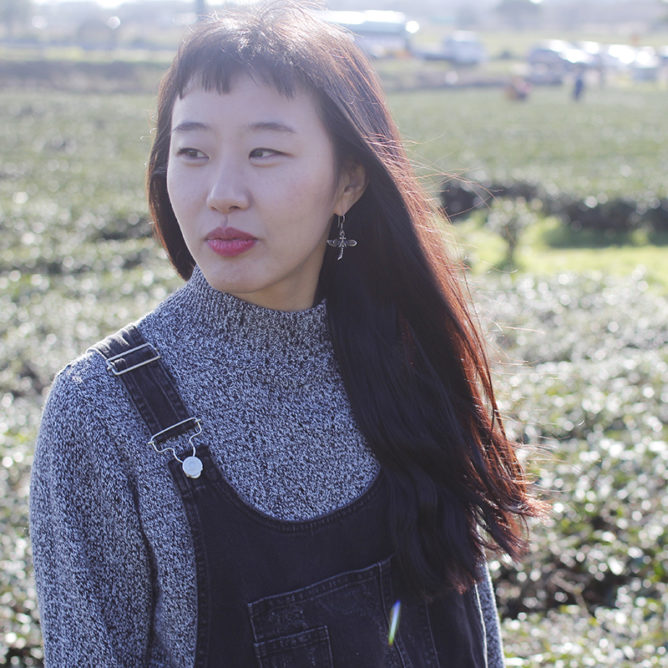 Stephanie Kyuyoung Lee is a spatial practitioner and researcher based in New York. Her practice often explores the intersection of post-colonial anxiety and mechanical labor systems in the built/non-built environment. She runs PILE, a design collective that has collaborated with several women shelters and artist co-ops with a community driven design approach. Read more on her contributor page.