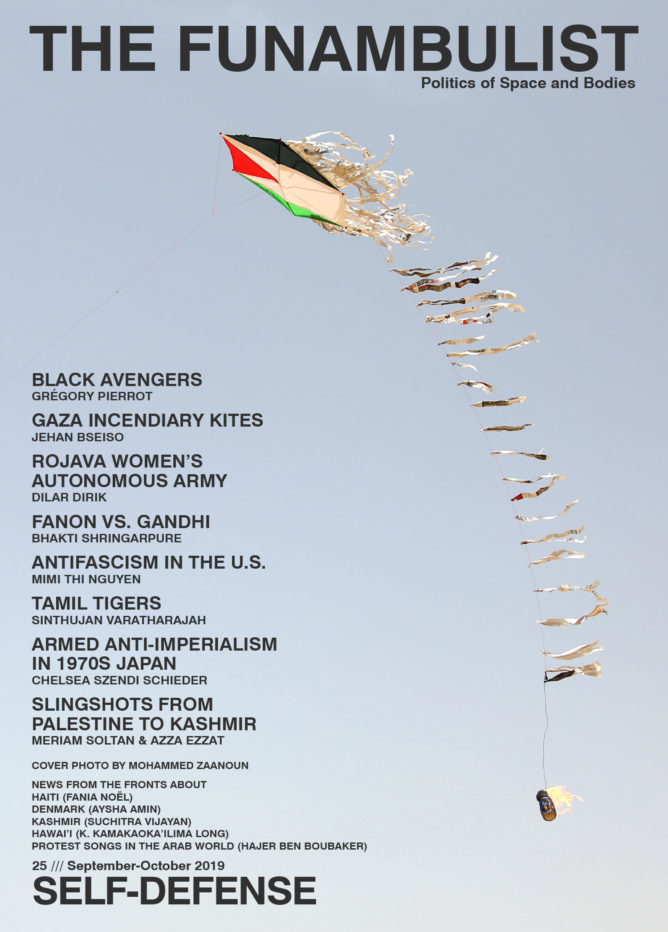 The photograph displayed on the cover was taken on April 20, 2018 by Gazan photographer Mohammed Zaanoun. It features one of the ingenious incendiary kites sent by Palestinian activists over the apartheid wall that separates the Gaza Strip from the rest of Palestine. Balloons, kites, and stones flown and thrown by Palestinians from Gaza are the only objects that successfully break the 12-year-old Israeli blockade on a weekly basis since the beginning of the Great March of Return initiated in 2018 on Land Day (March 30). As for bodies themselves, thousands of them are forever injured, when not slain, by the fire of Israeli army snipers each Friday when Gazans march towards the interior of Palestine as a way to manifest their will to return to their family’s land — about two thirds of the 1.9 millions of Gazans are refugees. The incendiary kites are the appropriate embodiment of what we describe as “self-defense” throughout this issue: they are highly symbolical as, just like slingshots, their fragility insists on the profundly asymmetric forces at stake, but they are also effective and have successfully burnt some parts of Israeli fields on the other side of the apartheid wall, where agriculture is given all the means necessary to its success, on the contrary of Palestinian-owned fields, subjected to the blockade and even occasional pesticide attacks by the Israeli aviation.