In this text, the host of the podcast Vintage Arab about Arab music heritage, Hajer Ben Boubaker gives us an overview of the way protest songs are part of the revolutionary history of the Middle East and North Africa, in particular when they are sung by the crowds of ultras in football stadiums.

In modern collective memory, the intersection of Arab songs with politics dates from the Egyptian Revolution of 1919. The first few decades of the century coincide with a period of intense cultural creativity, marked by the thundering development of theater and musical theater, especially in Egypt. We owe the rise of anti-colonial songs to the immense Egyptian composer and singer Sayed Darwish who composed “Biladi biladi” (“O my country!”), an anti-colonial song against the British presence, which became the anthem of the Egyptian nationalist party and ensured him to be one of the first regional musical stars.

Like Darwish, other artists also developed their political positions in many other countries. In Algeria for example, the great singers of Chaabi, the most popular musical genre in the country, responded to the call for an artistic strike initiated by the National Liberation Front (FLN) during the 1954-1962 Revolution. The Chaabi icon Cheikh El Anka, stopped singing until the Declaration of Independence was proclaimed. He reappeared on the radio at the announcement of the Algerian victory on July 5, 1962 at midnight to sing “Thanks God, colonialism did not remain in our country.” In parallel to the songs popularized by classical or urban musical styles, many revolutionary songs from the working or rural classes emerged in all the colonized countries, often sung by women, but also by male members of the resistance. Some of the songs, such as “Min djibalina” (“From our mountains”), reached national prestige, and on May 8, 1945 it was performed by the Algerian Muslim Scouts (SMA) while leading the procession of the demonstrations, which was followed by one of the largest mass massacres committed by the French army. During the demonstration, hundreds of citizens roared the song in unison. However, the nationalist and anti-colonial songs embodied more a political positioning than to a musical style per se.

Moreover, this revolutionary legacy was soon used to their advantage by the postcolonial elites of newly independent states. The ‘political song’ became the showcase of the political projects carried out by the independent states. Even though they appeared and began their career in King Farouk’s Egypt, the stars of Egyptian music, beginning with Umm Kulthum and Muhammad Abdel-Wahab, started singing about the great dream of the Arab nation at the turn of the 1950s and 1960s. At a national level, especially for countries that had not adopted Arab nationalism as a political project, singers sang songs about the greatness of the nation and supported anti-imperialist positions. The 1960s and 1970s were a turning point with the emergence of protest songs that were not domesticated by politicians in power and reached public recognition despite the repression and attempts at political recovery. This period is characterized by an increasing political contestation against the authoritarian regimes in place with a conversation on social struggle and betrayal of the elites.

The Six Day War that saw the Israeli army invading the Sinai Peninsula, the Gaza Strip, the West Bank, and the Golan Heights in June 1967 is a central point in the development of protest music. Defeat was virulently denounced by political opponents, and politically committed artists who were no longer satisfied with songs of lamentation denounced the lack of responsibility of the Arab countries and called for resistance. Palestine appeared in music as the new avatar of struggles and protest. A figure materialized the advent of this music: Sheikh Imam, an Egyptian singer, took part in formalizing the genre with his sidekick and friend, the Egyptian poet and expert of poetry in vernacular language, Ahmed Fouad Negm. Both coming from poor backgrounds, they rejected the Egyptian power stranglehold over their music and popularized a genre that did not meet the Tarab canons — a musical genre of classical style that was fashionable at the time. Near left-wing political spheres, Sheikh Imam sang about the Revolution with his legendary song “Guevara is dead !” (1967). He also tackled the sufferings of the Palestinian people and the misery of the proletariat in the land of the Nile, as a challenge to the oppressor.

Despite censorship, the diffusion of his songs was made possible thanks to the existence of left-wing parties of opposition, the Egyptian Communist party in particular. Small cassettes circulated covertly and then broadcast on all university campuses before being sung in protests. After trying to rally them to his side, Nasser locked them up. Their imprisonment lasted from May 1969 to October 21, 1971 and will be repeated under Sadat (1970-1981). If Cheikh Imam was their figurehead, disenchantment and social injustice led to the emergence of many artists in different territories. Debza was a committed Marxist-Leninist theater troupe created in 1979 by a group of students from Algiers. It derived from the Cultural Action Worker Association founded by the playwright Kateb Yacine. Debza troupe has about 50 songs in Algerian Arabic and Kabyle, to its credit. On the cultural front, the Debza troupe claimed the recognition of oppressed languages, Tamazight and also Algerian Arabic.

In Morocco, during the reign of Hassan II and within the time period now known as the “lead years,” two major bands emerged: Nass El Ghiwane and Jil Jilala. They became the symbol of protest and popular political counterweight. Their music and their texts drew from a repertoire of medieval protests and lamentations. They returned to the tradition of majadibs (illuminated Mystics people from the moroccan sufi tradition, 15th century). These majadibs crisscrossed the country, sometimes haranguing the crowds, at other times lamenting the fate of the Muslim States after the fall of Granada in 1492. Their texts settled as a tradition of protest and were reinterpreted through centuries. When Jil Jilala and Nass el Ghiwane reconnected with these texts during the years of political and social distress in Morocco, students as well as activists of the Marxist left adopted them in spite of their content that was sometimes religious. In the Middle East, Lebanese Marcel Khalifa was considered as the new pillar of the protest song, being close to the Palestine Liberation Organization (PLO). He put into music the poetry of Mahmoud Darwish, who wrote about the liberation of Palestine, the political repression, lack of freedom and impossible mobility. He was followed in this way by Syrian Samih Shokair, from the Golan Heights, and Lebanese Ahmed Qabbour.

The gradual weakening of leftist movements and the end of the Cold War affected the media of diffusion of protest music. Already present at the end of the 1970s in journalism, the Saudis starting investing in the audiovisual industry, and especially in satellite television, following the first Gulf War, often through business relations, in one way or another, to the royal family, like Walid Ibrahim. Ibrahim launched the MBC (Middle East Broadcasting Center), the first true pan-Arab chain in 1991. In 2003, the mogul of the Arab media Prince Al-Walid Ibn Talal became the controlling shareholder of the Lebanese Broadcasting Corporation International (LBCI) and a happy father-owner of Rotana, created in 1987, which brought together entertainment TV channels featuring American-style videoclips, radio stations, a performance company, a record company. The company aired, with few exceptions, the totality of the stars of Arab songs. The capitals of the Gulf disrupted consumption patterns in Arab countries by contributing to the massive rise of a United States-style pop-culture, crushing more traditional styles in its path. It provoked massive censorship of the political discourse and a religious conservatism denounced in the movie Alexandria again and again (1991), by the Egyptian director Youssef Chahine, who told stories about the arrival of Gulf money in the Arab audiovisual landscape, just as the Algerian director Farouk Beloufa did in Nahla (1979).

This period coincides with the organization of ultra football movements in the countries of North Africa and more specifically in Egypt, Algeria, Tunisia, and Morocco, the only countries in the region with renowned continental-international clubs like El Ahlwy, Esperance Sportive de Tunis, Raja Casablanca. The ultra movements experienced a new boom with the development of the Internet in the region to the point where authorities started to worry. Indeed, thousands of ultra fans gathered on a simple call relayed on forums and had autonomous, self-funded budgets that allowed them to set choreographies. Aware of being perceived as a danger, most fans refused any contact with the press, used aliases, and more generally developed a culture of secrecy. If the ultra movements stirred fans in all social classes with a spectrum of political opinions, a large number of them came from the working class and were regularly confronted with police brutality. The social question had a determining position in the ultra’s songs. Sometimes systemic and global claims — against the authoritarians regimes — could also relate to more specific topics such as (often abusive) stadium bans or incarceration of some ultras.

Since 2011, the ultras have supported all the revolts of Arab countries, bringing their expertise in mobilization and security as well as informing the chants of the protests. Thus, the ultra of the two biggest clubs in Egypt, Al Ahly and El Zamalek, were among the initiators of the movement against Hosni Mubarak in Egypt and their songs were taken up on Tahrir Square, which they helped to protect from the police. The Algerian Hirak (struggle) also has its hymn and it is again the work of the ultra, this time of the USMA (Union sportive de la médina d’Alger, is a football club based in the city of Algiers). The singing of Ouled el Bahja, an ultra USMA group responsible for composing songs, “La Casa del Mouradia,” was taken to the streets of the country to demand the resignation of President Abdelaziz Bouteflika in 2019. Football is emerging as the new channel of diffusion that bypasses the censorship of the power in place. At the beginning of a match, the tradition of the dakhla (opening) constitutes a decisive moment of renewal of the songs and enrichment of this heritage: this moment that lasts from 10 to 15 minutes constitutes the presentation of the tifo (gigantic banner), choreographies and new songs. The dakla deals with prominent political issues as well as old protest music massively broadcasted during protests.

A generation of young people throughout North Africa and the Middle East sung “Dalmouni fi Bladi” (“In my country hit by injustice”) of the Ultras Eagles of Raja Athletics Club of Casablanca, a song composed during the Hirak ash-Shaabi, a protest movement from the Rif region that presented the biggest challenge to Moroccan authorities since 2011: “Talents were destroyed! Destroyed by the drugs you give them. How do you want them to shine? You stole the riches of our country, Shared them with strangers, You have destroyed an entire generation…”

While protest songs are rooted within several genres, they are associated with a desire for social and political change and characterized by lyrical. Furthermore it characterizes itself with a political stance, an activist commitment that goes beyond the calling out of social injustices. Despite its vitality and its long history, whether social or artistic, the protest song IS now marginalized, at a time when the music industry, subdued to intense political pressure, favors entertainment. It keeps on being called upon beyond the traditional artistic sphere to the point that it is mainly carried by football supporters in order to keep a legitimate stance in pop music. ■ 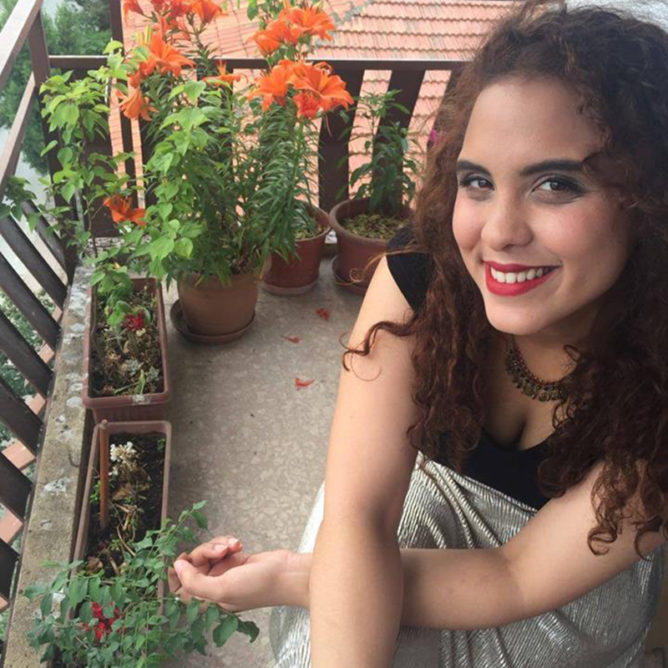 Hajer Ben Boubaker is a Paris-based researcher. She graduated from Sorbonne University and EHESS in History, Political Sciences and Gender Studies. Her research focused on women migration in Turkey, UNHCR refugees policy and colonial culture in NGOs. She’s the conceptor of the Vintage Arab project, a podcast series about the Arab musical heritage. Read more on her contributor page.