Slingshots are one of this issue’s key objects dedicated to self-defense. From Palestine to Hong Kong and from Kashmir to Greece, they can be deemed as the weapon of the weak as Meriam Soltan attempts to demonstrate in this text along with an artwork drawn by Azza Ezzat to illustrate it.

Slingshots and stone-throwing have risen to the forefront of organized dissent in Palestine and Kashmir as tools capable of creating both authority and autonomy for protesters seeking to exist beyond the dynamics of occupation. They are key to understanding what it means to protest in some of the world’s most heavily militarized regions, and how resistance exists in environments where the very history of the land is weaponized against its people. Emblematic of resistance, the slingshot can offer insight into how the narratives it performs can impart protesters with the agency necessary to reject present injustice.

Long since weaponized to drive and justify the violence of settler-colonial worldbuilding, narrative has become a means through which the realities of entire regions have been actively rewritten and reformulated. In its particularly powerful political dimension, narrative is capable of bolstering military agendas to become more than they could have otherwise ever been. While brute force can conquer land, it is the support of narratives (and the ideologies they justify) that secures lasting control. Palestinians, in the face of crushingly disproportionate odds, have been able to sustain their struggle thus far through a similar commitment to narrative-driven politics. It is through the appropriation of one of Zionism’s most essential narratives, that of an Israeli David against an Arab Goliath, that Palestinians are able to stand their ground against systematically institutionalized violence. With the original justification for a Jewish State occurring through colonial narratives seeking to offset European responsibility for Jewish persecution in World War II, this narrative helped further consolidate international support for the occupation during the 1967 Six-Day War by weaving together a contemporary allegory of the intrinsically good settlers against the reigning evil of their Arab context.

With narratives of biblical proportions justifying the violence of the Zionist regime, it was not until decades later, in December 1987, that Palestinians were able to begin collectively challenging the global perception of the Zionist State through their own transformation of this very narrative, or rather, their performance of it. What would it mean to wield the very earth that has been so crucial to the fabrication of a Zionist State, a symbol of the dispossessed, as a weapon of the resistance? It was during this First Intifada that intermittent cases of stone-throwing gave way to a massive wave of protesters armed with slingshots against the insurmountable might of the Israeli army. So massively outgunned is the Palestinian resistance that the inevitability of defeat could only ever be actively challenged by a symbolism uniquely contextual to stone-throwing. Protesters, youth with arms stretched backwards, rocks held firmly in hand, gained unprecedented international media attention as they faced off with heavily armed soldiers retaliating with violently disproportionate force. While bringing stones to a gunfight is generally viewed as a nonlethal means of retaliation, the tactic was immediately criminalized by the Israeli government, and violators, many of whom are minors, faced up to 20 years in prison.

It is the act of stone-throwing that has enabled Palestinians to strategically transform the global perception of the Zionist State, ultimately reversing and appropriating the global Israeli image of David against the Arab Goliath, a narrative that has long since been weaponized against them. Through such efforts, the devastating strength of settler-colonial warfare ultimately became Israel’s disadvantage on the world stage. As a tool used to exercise the resistance, the slingshot exists in many forms and scales, with its materiality determined differently by each person. Fashioned out of various combinations of rope, elastic cords, textile, wood, and plastic, the slingshot is often the result of materials found on hand, and although the act of slinging stones is one and the same, its final form is unique to the preferences of those who wield it. The very creation of the slingshot is thus a manifestation of autonomy that the act of slinging only magnifies.

In this sense, stone-throwing allowed youth to challenge the occupation they were born into, to revitalize the struggle passed down to them from their parents. In owning the circumstances of their resistance, the slingshot-wielding youth of the First Intifada thus saw to the manifestation of a collective Palestinian identity. Denied the right to exist, the right to a just and fair life, Palestinians on the ground and around the world are united through this active exercise in resistance, the power of which lies specifically in its narrative ability to maintain the relevance of the cause across decades.

The lasting significance of the First Intifada therefore has much to do with the reversal of global perceptions and the success of Palestinians in manifesting a coherent narrative for their resistance. The six-year Intifada came to an end in 1993 with unprecedented media coverage and criticism of the State of Israel, extensive popular support for the Palestine Liberation Organization (PLO) as the official representative of the Palestinian people, and an undeniably divided Jerusalem (despite the Israeli annexation of 1980). More significant than any military victory, the narratives manifested by stone-throwing protesters thus encouraged an unprecedented level of autonomy and authority on the world stage.

While stone-throwing ultimately yielded to violence during the Second Intifada, the onset of the uprising in September 2000 is still defined by slingshot-wielding civilians and the disproportionate force exercised against them during their protests of Ariel Sharon’s provocative presence at the Al Aqsa Mosque in Jerusalem. Two decades later and the significance of the practice remains as strong as ever, with slingshots and stone-throwing immortalized in popular art, music, and literature all over the world. It must be noted however, that over-glorification in the media poses a potential threat to the resistance itself, should the defiance of protesters continue to be romanticized. Social media has allowed for warzone photography to run viral, a phenomenon that allows dangerous correlations to be drawn between the artistry of the medium and the sacrifice of its subjects. While it is now an integral asset of the resistance, social media can arguably commodify stills of the struggle through its ability to isolate specific instances from their larger contexts, distancing both subject and viewer from the conflict. A distinct difference therefore exists between narratives performed by protesters themselves, and their reproductions in the media.

Though such imagery runs the risk of undermining the specificity of the Palestinian resistance, it has in fact inspired others to take up the fight for justice in the face of extreme adversity. Kashmiri youth have found similar strength in wielding the violently contested earth of their homeland and have even likened their own resistance against the Indian army and police to the Palestinian intifadas. Also, the outcome of the settler colonial warfare of World War II, the occupied state of Jumma and Kashmir has since become the most heavily militarized zone on earth, with hundreds of thousands of security personnel deployed across the valley. Partitioned between both Pakistan and India along the Line of Control in 1972, Kashmir is framed as a territory caught in the middle of a violent political struggle between the two states. While this is indeed part of the conflict, such framing reduces Kashmiris to pawns with little agency in a struggle that predates the existence of either state. Regular media and internet blackouts challenge the Kashmiri right to voice dissent and generations of youth, much like the Palestinians, have only ever known the violence of occupation.

With the indiscriminate and often unprovoked violence exercised by local security forces met with sharp international criticism, Indian police officials have recently sought to quell such reproach by publicizing their adoption of slingshots as a means of crowd control. Within this context, the political history of the slingshot diverges from its traditional associations with protest and resistance to instead facilitate the agenda of the state oppressor. In other words, the Indian police attempts to use the same tools as the resistance to perform a significantly different narrative, one in which they benevolently seek less lethal means of managing civilian strife. Projecting such an image to the world allows Indian security forces to feign moderance amidst the violence that has long since characterized the region — much of which the state continues to be responsible for.  The mass-produced slingshots arming security forces are nothing more than a shallow facsimile of those personally fashioned and wielded by the resistance. With the Indian government’s recent retraction of Article 370 from its Constitution, the special status of Kashmir is formally dismissed, thus normalizing the occupation. Slingshots full of marbles and chili powder are simply at the front line in a much larger effort to justify an ever-increasing military presence in India’s fight for control over Kashmir.

With such different agendas facilitated by the same tool, the slingshot’s political history is therefore one of appropriation — both for and against the resistance. As a tool employed to facilitate various, often contradictory causes, its significance lies in both its symbolism and mutability. Ready to take on the meaning imparted to it by those who wield it, the slingshot, at its very essence, is a means of manifesting a sense of place. While protest preserves the existence of place for those physically and politically dispossessed of it, the same tools can be employed to assert the right to occupy, to fabricate a new world independent of the existing community.

With this in mind, the frequency and escalation of violence within the two contexts cited here arguably implies that resistance eventually outgrows the narratives that first formalized their very existence. Having served their purpose in clarifying a common cause and turning attention to countless human rights violations, these narratives can, after a certain point, no longer satisfy the desires of protesters searching for lasting political solutions — ones that cannot be achieved through symbolism alone. As a means to an end, narratives and the slingshots that perform them are tools that help voice the discontent of the public and the change they in turn demand. The ultimate triumph over adversity relies on political solutions capable of dismantling settler-colonial ideologies and power structures.

Understanding the slingshot’s ability to manifest an “alter-politics” thus becomes integral not only to the existence of the struggle, but to the existence of an independent people as well. While oppositional efforts constantly frame the oppressed within the context of the oppressor, the slingshot allows native populations to exist beyond this dynamic. Transcending this binary is integral to the struggle for self-determination, a fight that relies on the acknowledgement of an existing people and their right to independence and sovereignty. Slingshots and stone-throwing allow for this rejection of victimization and assert the authority of resistance instead. A responsibility to resist, to remain actively antagonistic, is manifested with each stone thrown and there is powerful autonomy in that.

So while the slingshot cannot truly manifest any real end to occupation, it demonstrates the inevitability of resistance, the defiance of those who will never accept a reality they have no say in. While the right to assembly and freedom of speech are actively suppressed by governments that evade persecution for the countless human rights violations they continue to commit, slingshots and stone-throwing embody the authority of a people that will never accept the circumstances of their present. Although often obscured and appropriated by state-sponsored violence, civilian protests lie at the heart of change, and youth all over the world continue to answer the call to rise in the face of injustice. As a tool, the slingshot cannot build a future — it simply imparts protesters with the agency necessary to reject an existing present. The slingshot is a reminder of that, even when the only thing left to wield is the earth itself. ■ 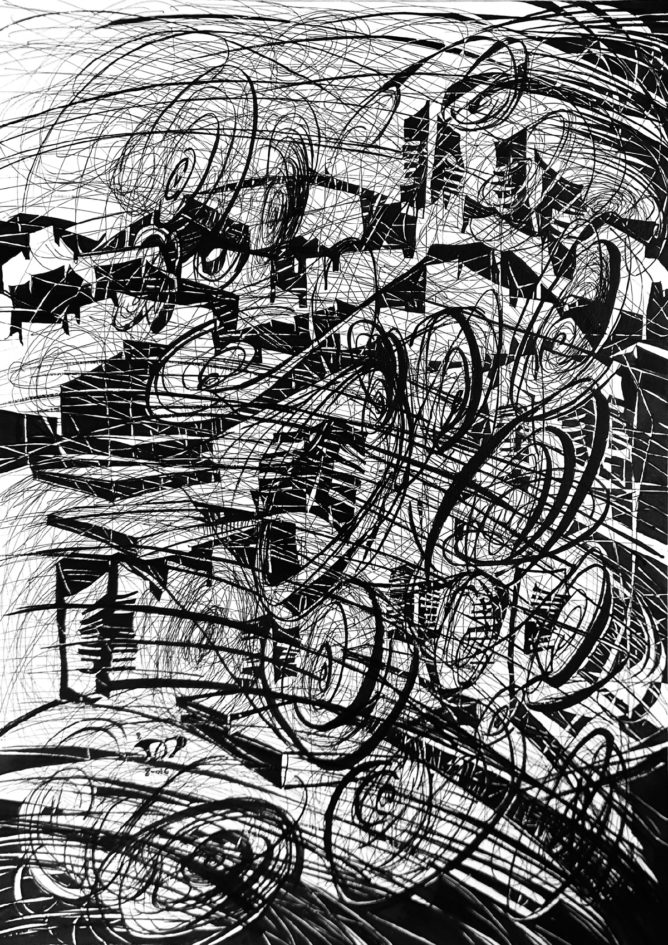