In this graphic story, Roanne Moodley tells us a short fiction dramatizing an exchange of politically-charged monuments between Reunion Island and France, thus allowing a reflection on post-colonial relationships, emancipative events, and the memorialization of colonialism.

“Our ideas about twins and twinship […] are therefore in a state of perpetual dialogue with a set of substitutes — ‘proximity,’ ‘similitude,’ ‘likeness,’ ‘closeness,’ ‘exclusivity’ […] a kind of currency in an economy of ideas about what we are or could be. Twins are useful, then, for their supposed intimacy — emotional, corporeal, real, or imagined.” (David Baldacci)

Reunion Island was a French colony which became one of France’s “overseas departments” in 1946, just off the coast of the African continent. Its street names (and even the fonts and colors of the street signs), public amenities, and governing systems are often duplicates of those that exist in France. However, the island’s Creole culture, demographics, tropical climate, and ecology are distinct.

Saint-Denis is a twin city to the French town of Montreuil, a banlieue (suburb) on the outskirts of Paris in mainland France, which houses various African diasporic communities. The concept of a “twin city” was first developed after World War II as a way of reconciling cities or countries that had formerly been at war with one another. Applying this history of twin cities to Montreuil and Saint-Denis in a postcolonial context allows for various new readings and political possibilities. This project imagines one of these readings.

Twin cities often share similar characteristics: parks, street names, important buildings and so on, but the cultural idea of the twin goes much deeper than site or location. Various cultural and medical anomalies exist in the concept of the twin, which have fascinated artists, scientists, and societies. For centuries references to the existence of “another self,” have featured in works of fiction as a way to confront the reality of the self. The psychological and social history behind the concept of twins, doppelgangers, the narcissist, and Freud’s notion of the uncanny have all influenced this project, as has Swiss French architect Bernard Tschumi’s seminal work The Manhattan Transcripts (1981), with its assertion that a city is influenced as much by its events as it is by its architecture.

The Twin Transcripts, describes the same event — Bastille Day Parade — which takes place in both cities on July 14 every year, as an entry point into a “twinning” program of events and monument transfers. This project is the twin of The Manhattan Transcripts and aims to subvert the western canon by reading Saint-Denis through a postcolonial lens. It collects transcripts from events, moments in history, and everyday life in both Saint-Denis and Paris, and sets out a new relationship between past and present through event and choreography. Drawing from the work of magical realist author Toni Morrison, this project uses the ghosts of events in Reunion Island, both of Creole and French colonial descent to destabilize the military parade, which itself commemorates the mythical birth of the French Republic. The project reveals the political potential in commemorating Bastille Day within a present day French department, through altering the festival to celebrate Creole culture and to reference anti-colonial political events in Reunion Island’s history.

The imagined “Ministry of the Twin” organizes this city-wide intervention according to a five-year masterplan: a program from July 14, 2019 to December 21, 2023. The major sites of the project include the Rue de Paris in Saint-Denis, Reunion Island, a street on which prominent colonial buildings like the Ancien Hotel de Ville are situated. The other site is the Rue de Paris, Montreuil, in mainland France, on which various immigrant markets, salons and shops are situated.

Just as the military parade of Bastille Day was historically transplanted from France to Reunion Island, with shifts in formation, scale, time, music, language and symbols of authority that were unintended by the authorities, this project transplants the Creole Festival of Mixed Freedom from Saint-Denis to Montreuil, to celebrate the end of slavery.

Similarly, one of the twin Luxor Obelisks now situated in the Place de la Concorde in Paris, gifted by Muhammad Ali Pasha to France’s King Charles X in 1830 is used as a precedent in this project. The narrative around the transportation of this monument to Paris, the power dynamics represented by the gift, and the presence of its twin in Egypt outside the Luxor Temple are used as a point of departure for future imaginings of monument gift exchange between Reunion Island and France.

Part of this “twinning” narrative is the transportation of the reconstructed Vendome Column (after its destruction during the Paris Commune) to Saint Denis during the Bastille Day Parade via military airplane. The event of the arrival, transportation and (anti)erection or submersion of the column in Saint Denis allows for moments of disturbance and political potential throughout parade. The same is done when Reunion’s Victory Column is gifted to France in return and erected during the Festival of Mixed Freedom.

These acts of transplanting festivals and monuments assert characteristics of each other’s identities in both territories, undermining the remnants of a historically colonial relationship in the built fabric of both cities by transforming a traditionally paternal relationship into a twin relationship. This is achieved by using strategies of ghosting, reflecting, altering, and transplanting. Together, these suggest a new architectural vocabulary, made of new forms, combinations, programmatic juxtapositions, and choreographed movement derived from distinctions and similarities between the regions and their histories.

This project uses the site of the twin — where the Self and the Other is brought closest together — to imagine alternative relationships between cities in a postcolonial context. As Tschumi claims, “the transcripts use their tentative format to explore unlikely confrontations” in the rich political context of event architecture in France and Reunion Island. The project, while both imagined and real, sets out an alternative future that is only marginally (if at all) more “surreal” than the past that preceded it. Using the western architectural canon, the Bastille Day Parade and the Luxor Obelisk as points of departure, this project seeks to find new ways to insert Otherness into the censored history we have inherited. ■ 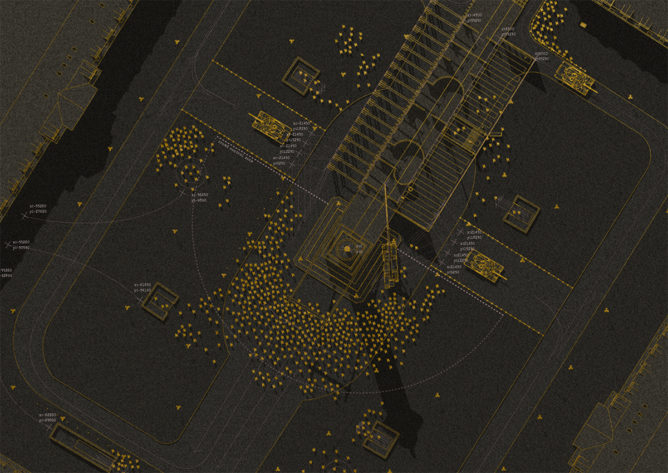 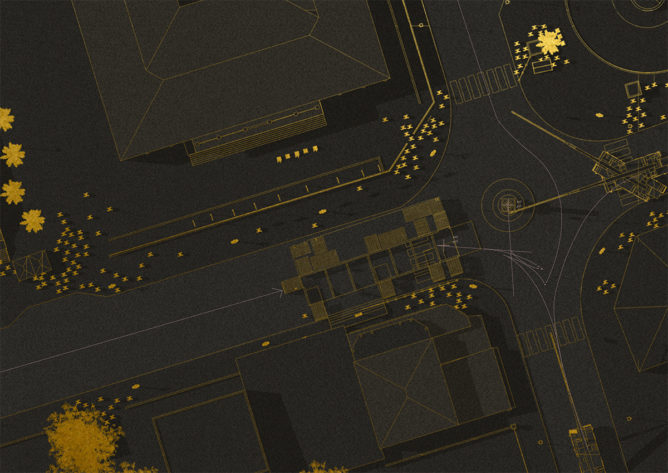 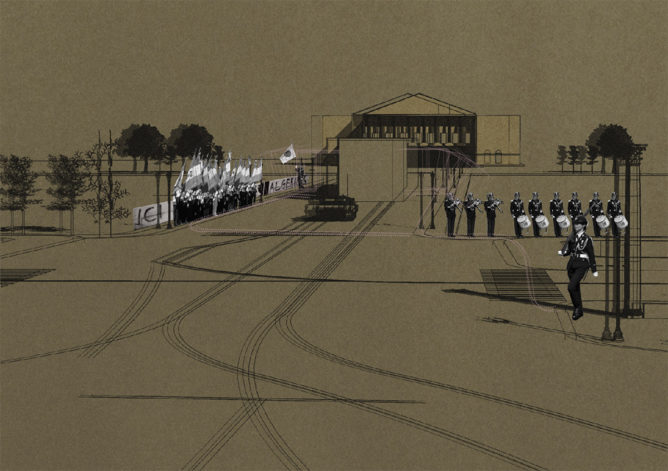 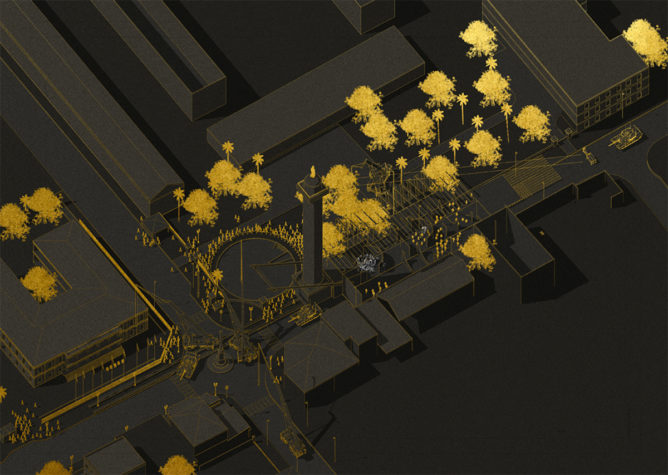 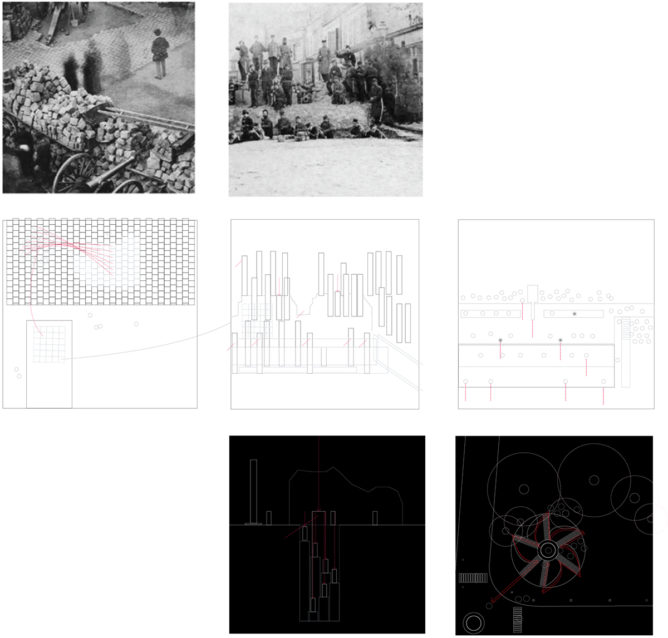 Ghost 2: Barricade. The guerilla tactic of barricades during Paris Commune is the ghost event in this instance. The tactic uses elements from the streetscape to submerge and protect the body and reveal only the barrel of the gun and head. It is applied to subvert the Vendome Column’s erection (or anti-erection), so that only Napoleon in classical dress is exposed on the Reunionese street.