Through this short story and this illustration (respectively), adrienne maree brown and Melanie West give us less a vision of the future than a description of the inherent futurities of queerness. Sometimes futurism is not to be found in time but, rather, in relationality.

dean let their leg hang over the arm of the recliner, that leg clad in a shiny black rubber thigh-high heeled boot. they flipped their pink locs over the back of the chair, hearing the soft pressing sounds of hair texture against the yellow velvet.

the recliner was retro, still relying on gravity and resting on the floor. this heaviness helped dean feel rested when everything else in the house was standard hover gear. eventually they’d get up and climb into their bed, which hovered inches over the floor at night and then drifted to to the ceiling during the day. the room was deep yellow, the walls covered in frames with photographs, paintings, dried flowers and herbs, mirrors.

dean was exhausted, the night had been a long one, their client a slow fuck, needing them to crawl around on their knees forever and then spank him even longer than that, telling him to beg for their forgiveness for slavery, jim crow, mike brown, sandra bland, muhlaysia booker, capitalism, patriarchy. they didn’t forgive this client — part of the work was showing white men that some things are unforgivable. and now their arms were tired, knees sore, they didn’t want company.

dean was a particular taste. these days, most sex workers were paid based on how alien they could appear, body modifications in direct relationship to the rate for a night of pleasure. chameleon skin, forked tails, invisible genitalia; desire was trend on trend on trend. dean’s speciality was fairly natural — they had all the genitalia at birth, a body that had been questioned decades before, but was celebrated, especially after the first encounters with the maksha, after learning that every other sentient species in the known galaxies was multigender or gender fluid. earth humanoid forms were viewed as slow on the evolutionary curve, and suddenly dean could pay their rent just letting a client look at them, touch them, watch them pleasure themselves to double orgasm.

dean considered sometimes leaving, going on a journey
to see places where they’d never be exotic, at least not for something as basic as their body.

ad slipped into the room so quietly that dean didn’t hear him at first. he was next to them with a mug that was steaming full of hot chocolate made with cow’s milk, spiked with something dark. ad’s wide brown eyes looked down at dean with gentleness as he set the flowered mug to hover by their chair.

ad slid his hands around dean’s thigh, seeking the seam that hid the boot zipper, sliding it down and away from their leg, unveiling black brown skin, tender from the hours trapped in rubber.

somehow dean always smelled good. they’d been raised by a self-proclaimed witch who was unafraid of the natural world, who taught them the names of flowers and herbs, who taught them how to pull the scent and medicine out of the earth, and how to return to the earth what was not used.

now, with the water rations, having only 16 oz of personal use water a day, meant that a lot of people used wipes to ‘clean’ their armpits and genitals. dean didn’t like the way the chemicals felt on their body. they could smell the scent of their clients’ body odors shifted around on the surface, synthetic smells that were called lilac, lemon, fresh air — none of these smells were accurately named. most people now didn’t know what anything in nature smelled like. dean did. most people just lived with a ripeness at the creases, a funk on the skin. not dean.

ad knew that the only time dean ever smelled sour was when they were in a depression cycle. otherwise, dean had a methodical process of using damp cloth soaked in water with tea tree oil to wash their bodies. they used a small brush daily, all over, to clear their skin free of dead cells. they made their own whipped body butters with drops of oils that made them smell like trees and lavender. they put powder under the rubber boots, the latex bodysuits, the severe looks that made them irresistible to their clients.

ad considered it his job to support dean through these cycles, to remind them that when their skin was clean and they smelled good, it helped them feel better. he helped dean organize their products and creations, tracking when it was time to change the water, time to get back in the kitchen and cook up some more of their concoctions. ad loved dean. and dean was the main income source for their household, dean was the one who could always get money in place for rent, for food. ad loved to care for dean, and dean loved receiving that care after.

now, ad flung one boot at a time towards the closet, which quietly opened, guided each boot to the right spot, and closed.

dean didn’t respond with words, just a look that said exhaustion/help/quiet. ad was essentially receptive, a buttery yellow brown body with thick melting folds of flesh and soft hands. he pulled a small glass canister of cannabis salve from the unseeable shelf behind dean’s ugly old chair and scooped out a finger full, warming it between his hands before rubbing it into dean’s tired feet, taut calves, sore knees. as he moved across dean’s flesh, he kept scooping more salve between his palms, until dean was slathered and could feel the tension releasing down their long legs.

dean was so grateful for this tenderness that they leaned forward and caught ad’s face in their hands and kissed him, quietly, easily. ad smiled against dean’s mouth, whispering, “that’s my baby.”

dean found one of ad’s slick hands and pulled it softly between their thighs, into their body. in this way, ad on his knees in the plush carpet, dean sprawled open in the chair, the sex that is so familiar between them unfolded.

and then the door slammed opened on this steamy moment, and na blustered in, seeming to tumble through the air.

“in the living room? again?”

dean, on the edge of a small relief, gave na a withering look. ad paused, slowly, keeping his fingers slowly pulling forward inside dean while turning to face na. ad had questions on his face, somehow able to be exacting and patient at the same time.

ad looked around for “the fire” while na stomped around a bit, three puffy ponytails flipping around her head as she turned in the small space, kicking off her floater work clogs, battling her way out of her jacket.

na had a hopeless tendency, and it was met by the world more often than not.

dean’s eyes closed, too tired by this night to even begin the work of shifting na’s energy. na noticed, and inhaled, prepared to launch an argument, offer more data, more crisis. but ad spoke first.

“na. hello. we’re currently being very queer and trans. would you like to join us?” his smile is sincere through his beard, only a touch of mischief.

“you think it’s funny. it’s not! we must do something to stop this legislation from passing. i can’t go back in any of those fucking closets.”

ad sat back on his heels, sliding his fingers out of dean and drying them against their thigh. he stood up just in time to intercept na pacing the floor and grab her shoulders.

ad held na closer, and then wrapped his arms around her. ad inhaled, pushing their belly into na’s and then let the breath move through their bodies, until na was back into their bodies.

ad looked in na’s big green eyes, leftover over from some love affair that was forbidden for its time. her skin was deep brown, and these eyes were always a surprise to him. now, she looked expectant.

“yes almost. but there’s more fight!” her voice was shaky.

“I know you’re so scared love. but if you let them come in here, into our liberated space where we get to live outside of their labels and regression, then, only then will they be able to make us, this, disappear.”

na’s eyes closed. they dropped deeper into breath, deeper into ad’s hands, until they leaned forward against his shoulder.

“i’m sorry. i forgot. i panicked. i’m sorry to ruin your night.”

dean chuckled in the chair, eyes still closed: “oh na. they want us to forget, we all do.”

“you could never ruin our night. but…” ad pulled back from na, still holding her, “it could be a good moment to practice being free real very queer people.”

na giggled a bit at this. ad’s face stayed very serious as he placed a finger, delicious with dean, against her lip, as he guided her mouth to the source of dean, and stood over them, finally unzipping his own pants.

it didn’t take long for all of them to find what they needed — release, belonging, calm. the inevitable took over, the pursuit of pleasure that got them to this point of freedom, and would keep them going.

attended to in parts, they became whole again. addeanna, mug in hand, drifted towards the bedroom, ready for sleep. ■ 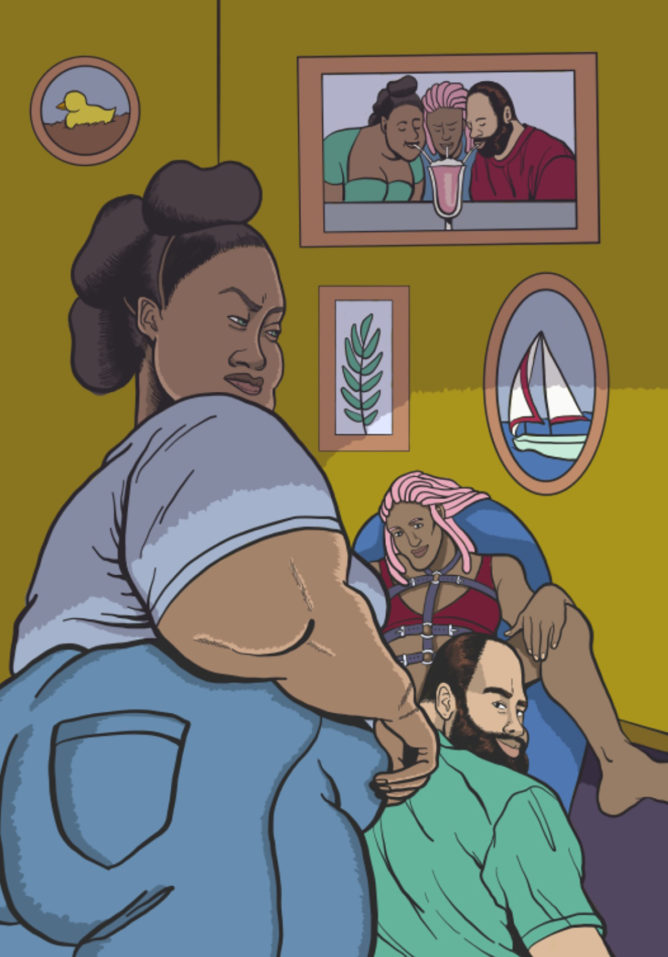