How do you give a future to your colonized ancestors? How do you part from the idea of “coming from a place” and, instead, embrace placelessness? How do you refuse to talk or invent your own linguistic codes when you are summoned to speak? Tarek Lakhrissi gives us hints in his exhibition Caméléon Club.

I know that RuPaul’s Drag Race has been called out for many reasons: racism, transphobia, misogyny… But I keep watching it. It’s a guilty pleasure. One of the queens that I really like is Valentina. Every drag has its own character, and Valentina’s character, besides embracing and playing with Latinx culture, is this playful and dreamy character who always lives and — I’m quoting her — “in her own fantasy.” I’ve been thinking recently about how radical it can be for a queer person of color to actually preserve their own fantasy, or rêverie, as we say in French.  But also because Audre Lorde wrote it in “A Litany for Survival” (1978): “We were never meant to survive.” For me, this kind of fantasy is very empowering, because we’re normally expected to perform political discourses. I actually feel way more honest about seeing Valentina just enjoying herself, and talking about fantasy with a lot of humour and self-irony on a mainstream TV show. I wonder if fantasy can be perceived as a way to escape space and time. It’s a counternarrative against death, which queer and trans people of color always link their identities with. I think Valentina’s fantasy is also her way to breathe. I think for me, breathing is a way to produce a counter-discourse and to escape reality.

First, working on futurism is indeed a response to dystopian representations of fascist homoerotics (cf. Jean Genet erotics, Jack Halberstam’s book The Queer Art of Failure). On the other hand, it’s also a way to present a future to my colonized ancestors from North Africa, who were not supposed to have a Future or to see the Future. A common reference in my art has been Jose Esteban Munoz and his books Disidentifications (1999) and Cruising Utopia: The Then and There of Queer Futurity (2009) which consider queerness more as a possibility, a horizon than an identity. In Cruising Utopia, he quotes photographer Kevin McCarty and a striking anecdote about two clubs in a strip mall in Dayton, Ohio. According to McCarty, to get to the 1470 — a gay bar — you first had to pass through the punk Chameleon Club. Two worlds coexisting in the same space. Muñoz comments that McCarty “is narrating a stage of in-between-ness, a spatiality that is aligned with a temporality that is on the threshold between identifications, lifeworlds, and potentialities.” Thanks to the existence of such a threshold, a space of potentialities and utopias opens up and it’s precisely this notion of a threshold that was the starting point for my Caméléon Club exhibition (2019). I wanted to create a experience of in-between-ness inside the exhibition space. 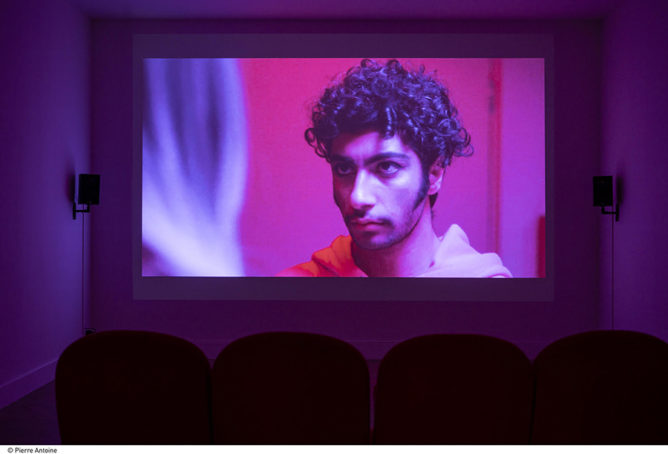 The exhibition space is turned into a parallel, futuristic world with a specific location in the Paris banlieue. I like the chameleon for its adaptability and elusiveness, which resonates with quite a few aspects of my personal biography. Indeed, my beginnings in a small French town left me with a fondness for the idea of a disidentified starting-out point, a side-long, quirky way of seeing the world, together with an experience of the urban margins as a driving force for radical ideas.

“I was able to imagine a time and a place that was not yet there, a place where I tried to live” (José Esteban Munoz). This power of imagination (or fantasy), and also focusing on spaces that don’t exist, is a way for me to create a new narratives about my own identity. I do not have any papers or archives, my parents don’t tell me stories, but I know I have Black ancestors who worked in the Sahara. My sense of time is then always about reinventing new perspectives and futures in my poems, but also in my artwork. I am born in a weird field, where family is not a linear story, but my ancestors surround me, especially in difficult moments. I feel like a bastard and my homeland is placelessness.

In my 2019 film, Out of the Blue, I tried to create an alternative space and time through the science fiction genre. The story is about this young queer and non-binary person of color, Mejda, who goes to the cinema, falls asleep, and when they wake up, meet up with different and odd people: a young Arab guy, a witch, a scary TV journalist, etc. Outside the cinema, we are in an unknown future, it is the end of the world, another apocalypse, and all the white straight men are taken away by some revolutionary UFOs. In the movie, the use of humor, almost campy, was very important. The “Grand remplacement” (which can be roughly translated into white genocide) is actually a Far Right theory (created by French writer Renaud Camus), stipulating that people of color will replace all white people in France. I wanted to play with intellectual references (like Audre Lorde or Gloria Anzaldua) but also with this expression, which despite its violent and cruel connotations is now re-employed in the French anti-racist circles like a joke: “I’m gonna ‘great replace’ you! ok byeeeeeee!” It is a way to say that we, as queer and/or people of color, will be present in the future. It is a way also to think about “chosen family” as a possible way to cope.

This specific approach of family, the idea of community, resonates with the description made by Janet Mock (also present in the Blood Orange interlude called “Family”):

“You asked me what family is / And I think of family as community / I think of the spaces where you don’t have to shrink yourself / Where you don’t have to pretend or to perform / You can fully show up and be vulnerable / And in silence, completely empty and / That’s completely enough / You show up, as you are, without judgment, without ridicule / Without fear or violence, or policing, or containment / And you can be there and you’re filled all the way up / We get to choose our families / We are not limited by biology / We get to make ourselves / And we get to make our family.”

The future and like outer space have been two topics i’ve been obsessed with. When I asked Caroline Honorien (a Black French art historian) to write a text for my catalogue exhibition, I asked her to focus on the notions of architecture and music. And as we used to dance together in underground queer parties in Paris, we talked about Yves Tumor, Nkisi, Crystallmess, and… the Belleville Three who are three Black queers who kinda invented Detroit techno movement. She writes:

“Created during the 1980s by the Belleville Three — a trio of disc jockeys from Detroit’s black community — techno is a musical form whose UFO sonorities combine the Motor City industrial aesthetic with science fiction influences. While quick to be taken up in Europe, where it generated its own variations, techno has attracted relatively little interest in the United States. DJ Je Mills, a pioneer of the genre, has his own explanation for this indifference: ‘Planets and stars and futurism and time travel — these types of visions aren’t supposed to come from black guys from Detroit.’”

While reading Honorien pointing out this possibility to associate Black with weird and experimental movements, I also thought about my relationship to Hype Williams’ music videos and how I tend to distance myself from what people are expecting me to do and perform. Further in the text, she quotes Glenn Ligon, “Not being from here is a movement toward placelessness, toward the utopic, the post-human.” Well, it’s very complicated to translate placelessness into French, but this idea of “not coming from here” and actually not existing here in time and space was also part of my counter-discourse in my project Caméléon Club.

I don’t feel like I belong here, I’d say that too for the majority of spheres — therefore I can also argue that I don’t belong anywhere. I am perceived sometimes as mixed, Black, or Arab. Even my body, and my racial ambiguity makes me feel ‘outside’ of this world. To this experience of marginality, I am connected to the French banlieue, also known as the peripheric urban space where many precarious populations live, including French Blacks and Arabs. It is a also a segregated space in France between white people and people of color. The specificity of the French banlieue, is a place for me to create new worlds because it’s perceived as a place to gentrify, and push people further towards the outskirts of town. For me, the banlieue is a space of reinvention, where the whites can’t come, and where we can live in a parallel world — “that which is nowhere” as Honorien’s text’s title describes. 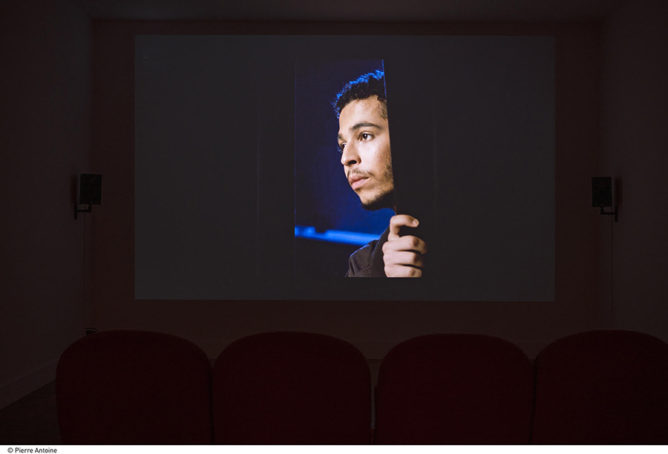 Even though Valentina was eliminated in her season because she didn’t know the lyrics during the lipsync, I see another reference to this loss of language, that actually comes with the loss of space. This is what we can call “placelessness” (Glenn Ligon), and here, a “speechless” mode of living that echoes my parents’ immigrant conditions. What I learned from my conversations with Olivier Marboeuf (a French Black artist and curator) throughout this exhibition, is the importance of talking with your own words. It is a way of becoming the echo of a History that does not recognize our bodies. And maybe, language resides in the action of not saying anything as a mode of refusal.

If I think mostly about my childhood in the banlieue, there were none who was writing. There were no books, except the ones that my sister had to buy for literature classes at school. One day I encountered Jean Paul Sartre’s L’âge de Raison (1945), and I remember, I was maybe 15 or 16, and it changed my life. Something weird had happened, I wasn’t supposed to find a book and read it. Since then, I always perceived literature or language as a way to grow and learn more about the world and myself. Reading also made me feel frustrated, because I felt that my body didn’t exist in those representations — Marguerite Duras, Hervé Guibert, why did you leave me alone? This also created a real distance with my homeland, my family and my French Moroccan culture — another way to read or understand the way “placelessness” manifests. After Sartre, Jean Genet came to me, and I discovered another language, another way of feeling new contradictory desires. Genet is similar to me, in that he always considered himself as a traitor. And this is how, I started learning how to code-switch, which can be perceived as a double consciousness for poor/queer people of color.

We can describe code-switching, in linguistics, as a way to change languages with the aim of adapting yourself. For example, the Moroccan darija is a mix of Arabic, Spanish, and French. It is two or three languages that are mixed, like Créole or the Joual for Quebec. Code-switching is when you put two languages in the same sentence. “I can start my sentence like this et la finir comme ça parce que je décide de parler en français.”

For Marboeuf, it’s specifically up to the minority body to create a place for discussion and to stipulate when and how this discussion should happen. This body must create a space for respiration, for spreading its wings, for the sound of its voice to encounter other presences. These presences are like ghosts for me. Ghosts or ancestors from another time, another world, and how my own presence can perform another world-making project. Now, we can breathe, breathe, and breathe again as melancholic ghosts. Looking for new ways to embrace our bodies and our silences. ■