In 2007-2009, Mahmoud Osman wrote two science-fiction novels that described a revolution in Tahrir Square in 2053. His vision became reality in 2011, but the Egyptian society preceding the 2053 revolt that he describes also bears a lot of ressemblances to the present one, as he explains in this text.

“…High solid linear walls protecting the perfect capital, defying nature’s sand dunes topography… Thousands of elevated security-watch towers determining the dominating city module… Ten octagonal Defense Ministry gigantic buildings defining the governmental complex skyline… An isolated colossal house of Parliament distant from any supposedly represented people… Empty monumental mosque and cathedral symbolizing the two religious authorities… An enormous dark mass diamond-shaped military hotel at the center of the entertainment areas… Hundreds of huge real estate development signs, addressing the elite, advertising exclusive luxurious residential compounds and promoting extravagant business, recreational, educational and healthcare complexes as well as embassies within diplomatic neighborhoods… A city as big as Singapore will only have one guarded access gate from each side… Only the chosen ones are allowed to pass these doors… The majority of citizens would be denied its entrance… Unlike its neighbors, the Egyptian state is now fully secured and safe from falling down.”

A capital, enclosed within a rectangular wall to protect it from its own people, seems like an extract from a Sci-Fi novel; however this is not the case. It is my mere description of today’s reality portraying Egypt’s new administrative capital announcing a new historical era!

In his 2018 speech, Egyptian President Abdel Fattah el-Sisi pointed out the danger threatening the country: “Couple of thousands of protesters could easily surround the ministries, house of Parliament and main city squares causing chaos and state collapse, and we cannot allow what happened during the “2011 Incidents” to be ever repeated again, hence the need for a new capital designed to secure all state pillars.” 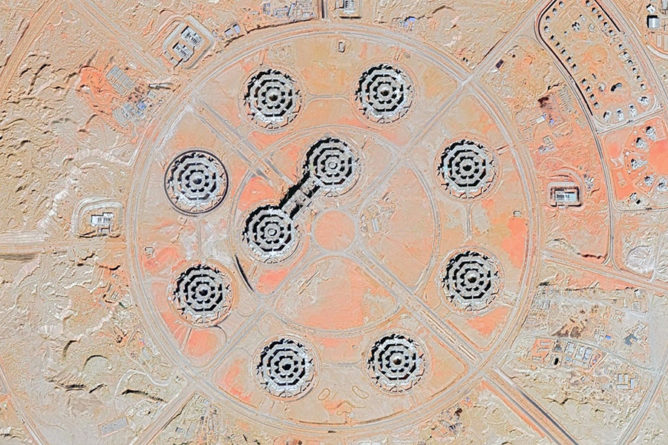 In my first novel Revolution 2053, the Beginning (published in 2007), I tried to portray Egypt’s future socio-economic and political evolution during the year 2026. Driven by my architecture background, I attempted
to conceive the urban growth of Greater Cairo and detailed various futuristic architectural projects. I was inviting Egyptian readers to live a dark cruel future, to be motivated to change their present, in order to avoid it.

However, in my novel, my imaginary description of a city in the middle of the desert, within high-secured walls, was only part of an epileptic futuristic vision occurring to the main character. I thought that, in the year 2026, enclosing a whole city within a rampart, like a medieval fortress, would be a blunt unrealistic cliché extracted from a dystopian movie — spoiling the futuristic realm I was trying to maintain throughout the novel. So you can imagine my cold, shivering feelings the first time I drove round the very real, new capital walls last year.