Voice of Detroit is a collaborative agent that advocates social change through public participation in self-publication, debate, honest and constructive journalism to restore genuine democracy as Detroit emerges out of bankruptcy. The goal of the Voice of Detroit is to produce accessible and affordable works by well-known and emerging local voices who are inspired by a vision for a new society. The success of the Voice of Detroit depends on the dissemination of ideas and the uplifting of voices excluded from and misrepresented by the dominant media.

The media plays a big role in recreating the city and formulating its social, cultural, and economic aspirations into tangible expressions. This cannot happen without addressing histories of division, corruption, and malfunctioning policies that have strongly affected Detroit’s recovery. Detroit newspapers have published false and sensational accounts of the Ford Hunger Marches. The Detroit Times, for example, falsely claimed that Harry Bennett and four policemen had been shot. The Detroit Press claimed that “six shots fired by a communist hiding behind a parked car were cited by police on Monday night, as the match that touched off a riot at the Ford Motor Company plant.” They also claimed that “These professional Communists alone are morally guilty of the assaults and killings which took place before the Ford plant.” (Sugar, Maurice (1980). Ann Fagan Ginger, ed. The Ford Hunger March). The Mirror also ran a headline stating: “Red Leaders Facing Murder Trials.”

We can revive public spaces and exercise rights to claim unused private spaces under certain conditions, in order to reverse the downsizing of Detroit — in this case, we can revive the abandoned former Detroit Free Press Building.The collaboratives identified are collectively-run, independent bodies providing forums for education and dialogue around political issues. Organisations will have space to become their own editorial, yet still be a part of a network for access to resources and other like-minded organizations.

Within the shell of the Former Detroit Free Press building, are individual groups that have come together to reorganise and re-wire Detroit’s network of independent and valiant media entities. The building has been hollowed out and replaced with arches producing a cellular structure. Arches effectively amplify the acoustics while its geometry keeps the sound bouncing. Variously-sized spaces are framed by the arches, indicating the possibility of more people to congregate here, and suggestive of the programmes that may take place. The bottom floors house the printing and archives; the middle is wholly accessible for the public to assemble; and the upper floors are working spaces for the media collectives. Their aim is to become a beacon of expression for the multiplicities that make up a true Detroit voice in printed form. They fight for the security of livelihoods in troubling times for the Motor City. ■ 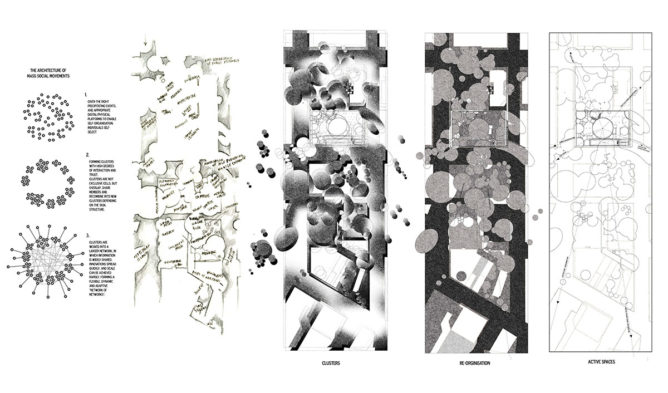 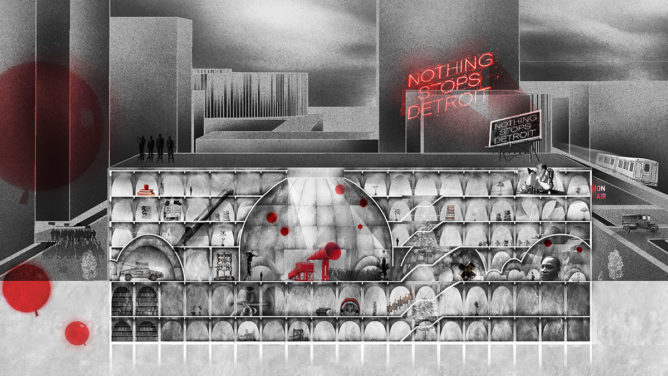