Article published in The Funambulist 17 (May-June 2018) Weaponized Infrastructure. Click here to access the rest of the issue.

The signing of a ceasefire agreement between the Colombian Government and FARC guerrillas in November of 2016 signaled an end to over 50 years of conflict in Colombia. Although this peace deal is a significant step towards the resolution of hostilities between factionalized government forces, paramilitary groups, and guerrilla fighters, sites within the country have been fundamentally altered by the civil conflict’s protracted violence and forced displacement. While violent destruction of land and livelihoods has often contributed to the impacts of the multi-staged war, displacement, marginalization, and violence are also consequences of the construction and management of infrastructure. Throughout phases of the conflict, counterinsurgency strategies relied heavily on infrastructure development programs, alongside intensive military operations, that sought to extend government control into underserviced and marginalized regions. The Carretera Marginal de la Selva (Road at the Edge of the Jungle) is one such infrastructural insertion. The highway was first conceived in 1963 as an eastern arterial road that would connect the frontier zones along the borders of both Venezuela and Ecuador. Plans for the Marginal de la Selva have included the consolidation and upgrading of previously built roads and paths into a single route that would traverse the eastern plains and forested regions in the Andean piedmont. The highway is still unfinished today — its proposed route crosses a large swath of formerly FARC held territory that bifurcates the highway into two disconnected sections. National proposals for completion have once again become central in the most recent national highway infrastructure plans. The most conspicuous manifestation of the weaponization of this highway is the frequent military checkpoints that interrupt it at strategic and highly visible locations, though an examination of the location, construction, and promotion of the highway reveals that its spatial assertion is a violent strategy of ordering territory and making populations legible. Photography here is used as one method to capture the sequencing of movement along the highway, alongside its intersection with the land and populations it traverses, to reveal the manifest and latent violence of infrastructure.

In this context, there is a significant spatial relationship between the location of highway construction and broader strategies of the Colombian state to extend itself both symbolically and materially over territory that was formerly beyond its control. The evolving counterinsurgency doctrine that has come to define the Colombian government response to guerrilla rebellion since the start of La Violenciain 1948 has operated within a regime of territorial contestation through a tripartite strategy of clear, hold, and build. Since this period of violence, the conflict has evolved from officially declared civil war between 1948 to 1957 to complex conflict between state and non-state actors characterized by leftist insurgency, right-wing paramilitary violence, and more recent drug cartel and counternarcotics operations. Significant within this history was a period of leftist guerrilla group formation in the mid-1960s, which was met with U.S.-backed Cold War counterinsurgency responses. Those have continued and evolved, as guerrillas have funded their operations through drug production and kidnapping. Of these insurgent groups, the Marxist-inspired FARC became the largest and most powerful within the country, controlling territories along the Pacific Coast and in the southeastern part of the country. While the initial violent interventions of the state that sought to clear guerrilla-controlled regions often specifically targeted the site of strongholds and camps, subsequent efforts to entrench control of territory has included more widespread practices of agricultural land titling programs and the physical construction of infrastructure to assert state presence. As a sequential strategy that has been developed alongside U.S. Military counterinsurgency doctrine elsewhere, these practices of mobile intervention and state affirmation were officially developed into the Program of Territorial Consolidation. While the official regime of territorial consolidation ended with the official signing of the peace accord, its fundamental positioning of infrastructure as a militarized tool to lay claim to extensive territory persists in the linear geometry of the highway. This logic of state territorialization can now be read through the ambitious 4th Generation Toll Highway Plan that seeks to further develop extensive limited-access highways through public-private partnership agreements.

The road has become a crucial weaponized space throughout counterinsurgency operations: the development of roads was critical to the military’s penetration of frontier zones characterized as ungovernable, while the paving and improvement of highways — in coordination with publicity campaigns through online videos, billboards, and Twitter hashtags — announce efforts of the Colombian state to secure logistical flows for economic progress. More than just a mechanism of economic integration, the highway is conceptualized as a tool that will bring peace to the country. While the highway is advertised and modelled to emphasize the promise of economic development and post-conflict reconstruction through the smooth vectors of movement, these spaces are themselves contested and intrusive as they seek to reorder life and orient it towards a linear conception of progress.

Attending to the ways that these highways disrupt lives differentially, these photographs emphasize the social relationality between land, rivers, and infrastructure in Colombia’s eastern piedmont. Over 50 years of civil conflict have been defined by contestation over land and struggles to control strategic corridors for the movement of armed factors and cocaine exports. Decades of violence between government troops, state-sanctioned paramilitaries, and leftist guerrillas have inscribed the territory with meaning, trauma, and value that contrasts sharply to the smooth surfaces and generic visualizations produced by national infrastructure institutions. The inconsistency between the lived experience of infrastructure and the desired uniformity of the paved highway reveals the agenda of the neoliberal state to equate peace with the uninterrupted flow of capital across territory. These infrastructural constructions — as proposals, visualizations, and built forms — provide insight into the ordering power of modernity as it crosses and constructs territory.

Overt manifestations of the weaponization of the highway are present in military checkpoints along the highway route. The heavy militarization of segments of the Marginal de la Selva has accompanied its construction deeper and deeper into formerly FARC held territories and areas that have witnessed intensive violence during the conflict. The completion of the route has been proposed now that the ceasefire agreement has been signed, however continued clashes between state and non-state actors in parts of Guaviare and Caquetá are used as justification for a continued military presence along the route. Typical along specific highways across the country, these interruptions were initially a part of a campaign by former president Álvaro Uribe Vélez to “take back the country” by securing highways and implementing a pervasive military presence along them. Although the checkpoints are heavily weaponized and entrenched spaces, they often only involve soldiers giving a ‘thumbs-up’ to vehicles as they pass. The banality of this gesture belies the underlying violence of the military’s pervasive presence. As geographer Diana Ojeda notes, these spaces are differentially experienced by marginalized bodies in a context where even a hint of suspicion can trigger the use of deadly force.

Along the Marginal de la Selva, bridge construction at Puerto Lleras and the recently completed bridge over the Rio Guaviare just outside of San Jose del Guaviare both demonstrate a reorientation of movement in relation to the river. The river, as a difficult path to patrol and slow to move along, has been replaced as a primary transportation route in the image of the flow of goods in the modern state. The Marginal de la Selva can therefore be understood as a dually weaponized space. It is a mechanism of control both through the militarization that is enacted at key strategic sites along its surface, but also in its underlying logic of state control. While a narrative of economic integration and flow of capital along highways is the outward focus of their construction in the country, examining how the highway entwines itself with the lives and land it crosses reveals it to be a weapon of state organization. 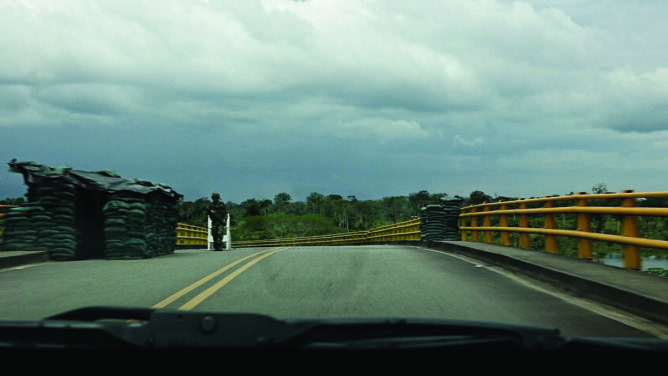 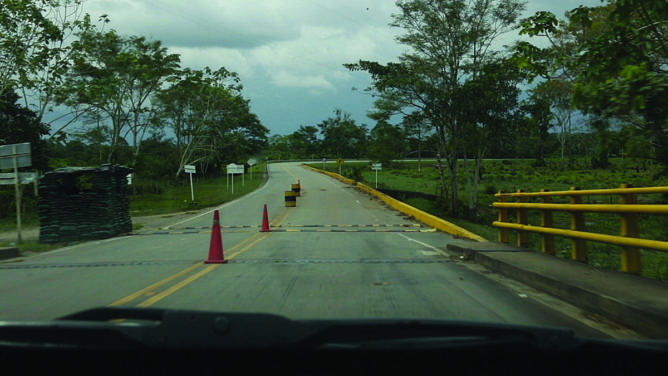 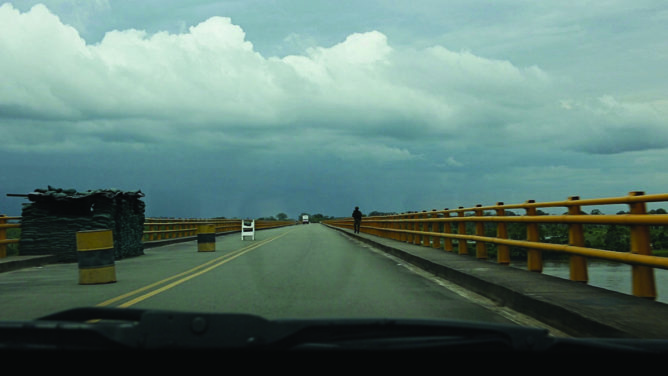 Zannah Mæ Matson is a PhD student in Human Geography at the University of Toronto. Her research focuses on the construction of landscape through highway infrastructure development and counterinsurgency doctrine in Colombia. She is a course instructor in Urban Planning and Design at the Ryerson School of Urban and Regional Planning. Read more on her contributor page.