The aim of this project was to investigate on the potentials of Athens as a city transitioning from “a capital in crisis” to a living city made by and for its inhabitants. Situated in a stigmatized housing complex in the center of the city, the project seeks to discuss how such a place (with its situation, typology) and the way it has been appropriated, could have the potential to become a resource in the Athenian urban landscape. The neighborhood, called Prosfygika, consist of eight low-rise blocks centrally placed along one of the main streets in Athens: Alexandras Avenue. The complex, which was built in Bauhaus style is one of few examples of social housing in Athens; emphasizing functionality, light and space between the buildings, and was initially built in the 1930s in order to house Anatolian refugees. At first, looking box like and randomly placed, the neighborhood was perceived as a heterotopia — a place of ”otherness”. But as both the blocks and the space between them was embraced and filled with life by the refugees, it soon became an open and inclusive neighborhood with a strong sense of community and solidarity. 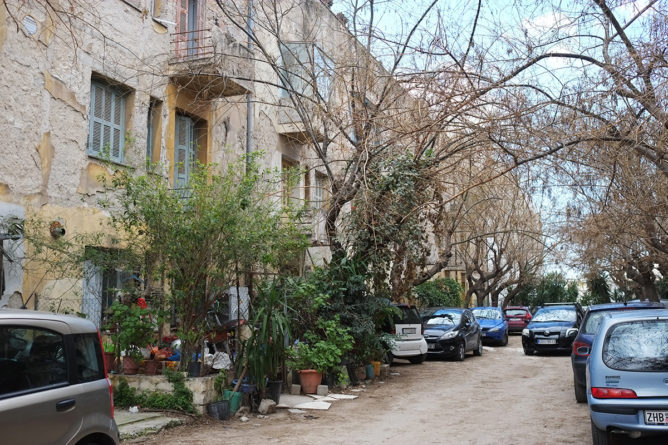 Unfortunately, as the city grew in the post war period, the area went from being vast farmland to becoming a part of the very city center. The community of Prosfygika suddenly found themselves being completely surrounded by two big hospitals on the top and right side, a large football stadium in front, a police station to the right, and the supreme court of Greece to the left. All large-scale “power buildings” cut off Prosfygika’s relation to the rest of the city, and once again turned the neighborhood into a place of stigma, and the space between the buildings was turned into a huge, informal parking lot.

This development led to the neighborhood becoming prime real estate, and as many from the community were offered to sell their apartments to the government and leave, many chose to stay and fight for their homes. Once again, Prosfygika became a place of otherness. Yet, as the many empty apartments yet has been inhabited by homeless Greeks, activists and immigrants, it has also become a place of collaboration and optimism. 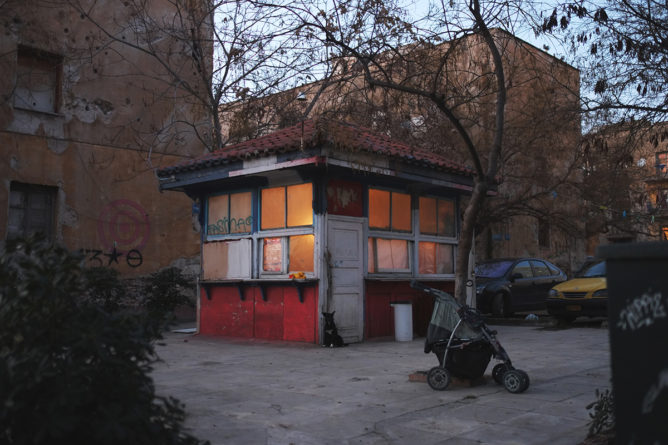 During a two week stay in the neighborhood, spending time with legal (and illegal) residents, looking at how the neighborhood has been re-appropriated, and how apartments are being transformed into shared community spaces, as well as how the space between the buildings has been carefully negotiated back, the project itself ended up, rather than an absolute proposal, as a speculation on how one may see the neighborhood change, according to this, emphasizing on three following points:

1) The desire to move within the buildings — a strategy on opening up and making the dense buildings more porous — opening up to allow change to happen.

2) The neighborhood as a village in the city — introducing public programs (a kitchen, a garden, a legal aid office and a youth club) in four different buildings, all relating to the surrounding neighborhood, hopefully strengthening the relationship with the complex and its context.

3) The objects of negotiation — small additions to the areas in-between, on top of and around the buildings; simple, playful elements enabling the residents to negotiate space between themselves, the surroundings and hopefully the rest of the city.