Article published in The Funambulist 16 (March-April 2018) Proletarian Fortresses. Click here to access the rest of the issue.

“Everything returned to normal, but it happened like a paradigm shift. The Inner City fell apart, its defense against the Margins broken.”

The history of cities is rarely told backwards. Usually, the story follows a familiar trajectory in which cities are born to a series of great ideas: robust theories imagined by architects, carried out by planners, and impressively orchestrated by a political mastermind. These histories are full of lies that contort reality to fit into convenient grand-scale narratives. In truth, however, a city’s history, is quite the opposite from these broad abstractions. Inverting the way we tell the history of cities is to acknowledge all that is directly before our eyes but have been deemed insignificant because they are not consistent with prevailing theories. After all, it is all of these seemingly meaningless odds and ends — bricks, barracks, street vendor carts, and open-air markets — that construct the everyday life of our cities. The underside of city spaces, or counter spaces, such as squats, slums, encampments and even street vendors, are not exceptions to or symptoms of disorder, but rather formulate a different order — an order constituted by spaces of resistance which have been excluded from official history. 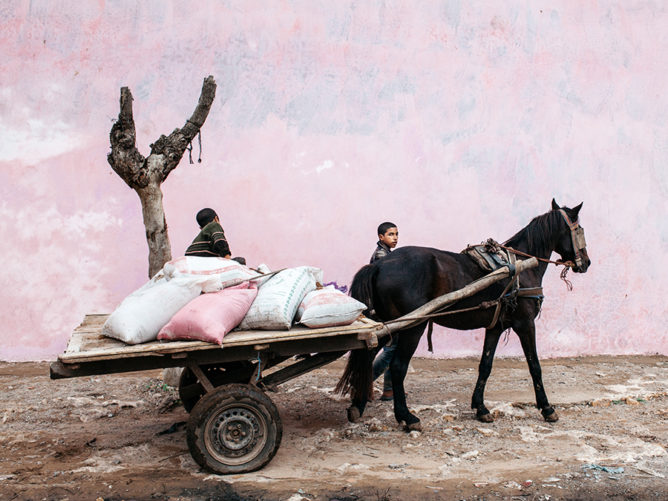 In Morocco, like many other places, theories of history prevail. Casablanca, as the story goes, was built by the charming French colonial architect Henri Prost (a man, who, in reality, was a pioneer of segregationist urban planning). Afterwards, King Hassan II controlled Casablanca with his iron fist before King Mohammed VI steered the city down the road to modernity. This well-polished story glosses over the countless struggles of working class neighborhoods that undermined the colonial project and its modernist implementations post-independence as upheld by the national elite. Even though tracing the threads of colonial power always provides great historical perspective, this article does not reach that far into history. Instead, I linger on the post-2011 period and the particularity of its hidden realities and revolutionary potentials. While the invisible revolution of self-construction shook the entire country for an entire year, there remains an enormous silence about it — a willful silence for some and for others, one born of ignorance.