The project Worn was designed in the context of a class entitled “Redingote mathématique contre monstruosité bestiale”(“Mathematical Redingote Against Bestial Monstruosity”). It uses the medium of architecture to explore the relationship between the body and the space it inhabits. The piece is at one time a tent, a cage that traps the body, and a costume that envelopes the individual. It is constructed with standard building materials, plumbing (PVC and copper) tubes and light gauge aluminum framing, working in tension with a heavy weight synthetic cloth. The form that results is both clothing and shelter; worn by the body as much as inhabited by it. 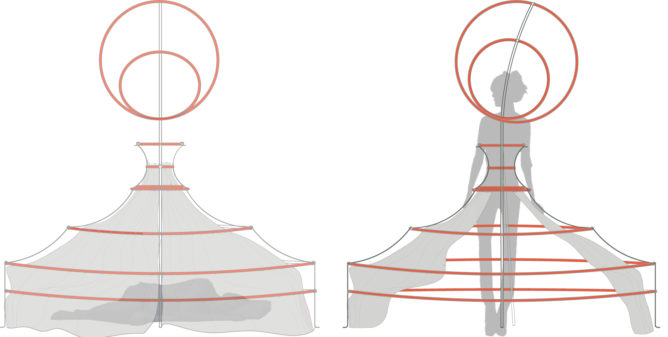 From fashion, the piece takes its cues from the crinoline and corset, historical devices found in clothing to exaggerate and manipulate the body. The corset compresses a women’s figure while the crinoline, or hoop skirt, accentuates. Together, the two techniques work through contrast to create an abstraction of the
human body form. The wearer appears to be both more slender and more bulbuous. These devices, worn almost exclusively by women, promoted a glorified reimagining of a women’s form. They emphasized the desired features while masking the bad. 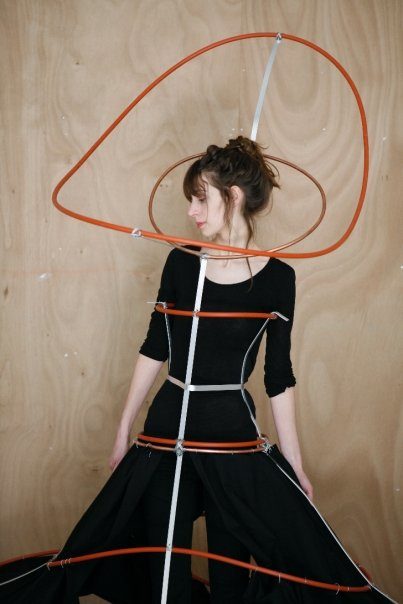 The piece builds open the themes of abstraction and exaggeration. Unlike the corset or the crinoline, the body is treated with ambiguity rather than hyperbole. The gender is neutral. The piece is uninhibited by fashion’s conventional role of flattering the body. It is neither comfortable nor traditionally attractive. Rather than accentuating the figure, it pulls away from it. In pulling away, a space is created around the body. The figure inhabits this space in the same way an occupant inhabits a structure. In this way, the piece flirts the line between clothing and architecture. 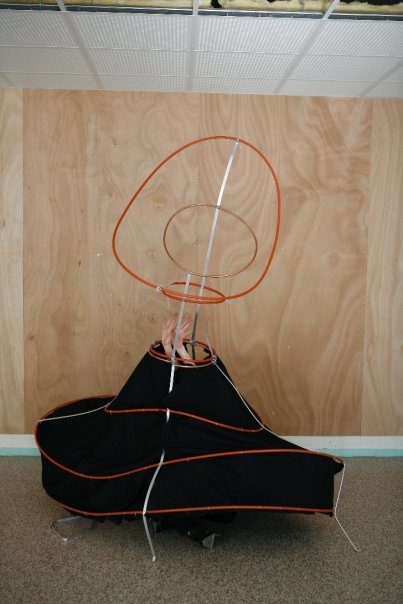 While in movement, the piece hangs like a scaffold on the body. Expanding volumes radiate from the center, tethered to the midsection by compression against the waist. When the user desires, a small release unfastens the center tube from the waist. The user can then shimmy down the structure and inhabit the form as a tent. The costume becomes an entity wholly independent from the body. The light gauge framing providing just enough structure for the form to be self-supporting. The oblong nature of the orange hoops is created by the plumbing tubes’ natural tendency to deflect. The piping and the fabric, working in tension, results in unexpected shapes divorced from function. Form follows material.

The wearer is both supporting the piece and consumed its volumes. We view clothing in reference to the figure that wears it, architecture in reference to the volumes it creates. This piece seeks to blur the standard frame of reference. The viewer may see forms in space and the figure as an inhabitant. Just as likely, the figure is the foundation that the piece hangs off of. The duality plays with distinctions between fashion and architecture; what is worn and what is occupied. 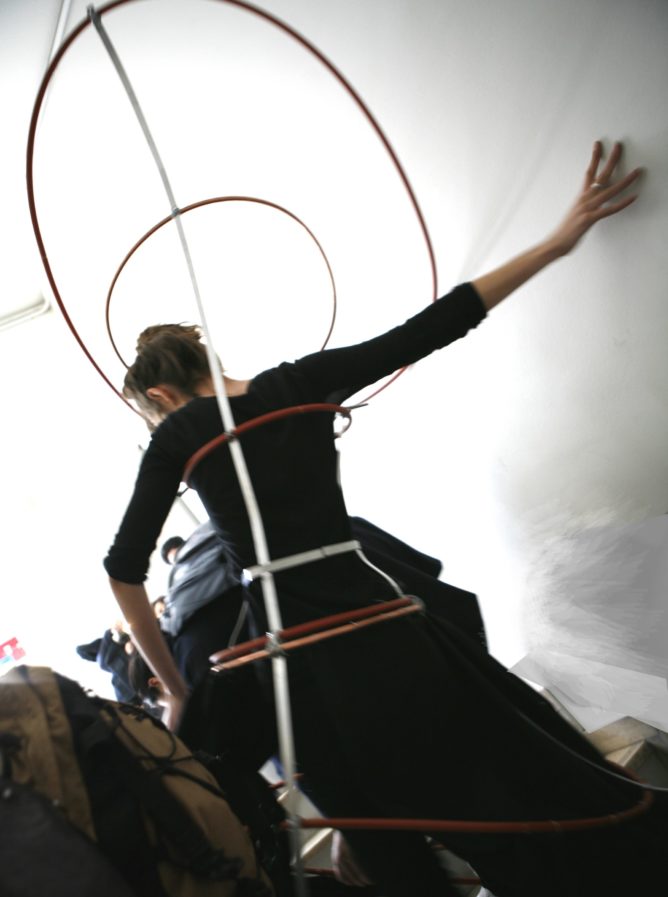