Industrial America’s fabrication of a mining empire has led many cities into an era of toxicity. The American Smelting and Refining Company (Asarco) in El Paso was one of the country’s largest copper smelters and has considerably contaminated the soil with heavy metals, further polluting the aquifer above which it sits. The plant took advantage of environmental currents in order to evade air pollution regulation by doubling production volume during south-traveling winds, forwarding pollution into Mexico. The border condition of the site operated in a jurisdictional bubble where one country’s exploitation led to exacerbated health concerns on the colonias. Many of the citizens in Ciudad Juarez who lived adjacent to Asarco reported having respiratory ailments and skin rashes during the epoch of Asarco pollution.

Residents from both sides of the border still suffer from respiratory problems due to continual dust storms and remnants of Asarco pollution. In addition, the unpredictable and extreme climate fluctuation has triggered an unprecedented global climate migration. Large populations have been forced to relocate to more suitable weather conditions. A considerable number of these climate refugees are left to suffer from respiratory diseases provoked by the climates they have left behind.

A respiratory ailment that is most notable for its correlation to the dominating Hispanic ethnicity in the region is Cystic Fibrosis. In a study conducted by Stanford University, Hispanic patients were three times more likely to have a shorter life expectancy than patients of any other ethnicity. Cystic Fibrosis is a progressive genetic disease in which mucus clogs the airways and traps bacteria leading to infections. Hispanic patients tend to have rare and poorly characterized mutations in the CFTR gene, thus limiting their resources to proper treatment. The mutations in non-Hispanics have also been extensively researched far more than those of Hispanic patients, who often have less means to undergo clinical treatment and analysis. Hispanic patients included in the survey lived in poorer neighborhoods, had lower quality of health insurance, and lower health resources.

Air quality and climatic conditions are imperative in providing relief and treatment to Cystic Fibrosis patients. The following proposal seeks to design an environmental bubble with clean air and water to mitigate the pollution on site while operating in a political margin. Water from the aquifer will be extracted and decontaminated to fill tubs in which patients will fully submerge themselves. The heat from the tubs will relax the muscles and provide necessary humidity to treat congested airways. The humidity from the tubs will rise to treat patients above,
creating a symbiotic relationship through treatment. The proposal re-examines the idea of communal treatment as explored in the sanatoria of the 20th century, whose treatment included social and shared environments that created a clear architectural and spatial typology.

The location for this proposal sits contiguous to the U.S./Mexico border. The infrastructure will be placed in El Paso, Texas, whose dry air and long sun exposure has historically provided the climatic context for treatment of respiratory ailments. The entry point will be placed in Ciudad Juarez for population extraction and in developing research of the Hispanic CFTR gene. An underground tunnel that evades sonar robots and other security apparatuses will connect the facility to the point of entry escaping governmental control of undocumented people. This project is about people crossing the border, coming together and setting the stage for an idea of a global healthcare system that transcends political boundaries. 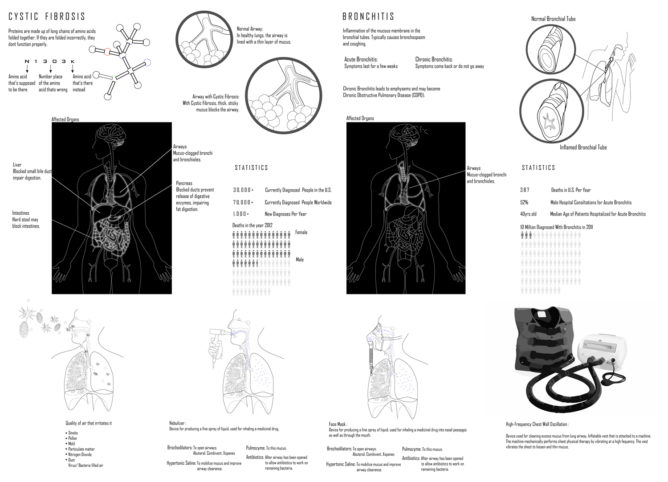