After the deaths of Zyed Benna and Bouna Traoré, two young inhabitants of a Paris banlieue, during a police tracking in October 2005, revolts in Paris banlieues took place for several weeks and then rapidly spread all over France. During the fourth night of combat between the police and the inhabitants of the cité (i.e. “housing projects”) Les Bosquets, the police threw a teargas grenade in the mosque in which Muslim residents were praying during the month of Ramadan. This event defined the frame of discussion of what was happening in Les Bosquets. The combination of toxicity as such and of what was seen as the contamination of sacred space created a sense of scandal that erased all the structural reasons behind the revolts in the first place and how the population itself saw this particular aggression against the mosque. In the following days, no word was uttered in the media about the many, albeit less spectacular grenades that exploded every day in Les Bosquets, and in other cités, and only a few words were spoken about the ton of grenades that were thrown before and after this event. Nothing was said about the life of teargas grenades outside the scandal of their explosive spectacle.

Indeed, a major contradiction lies at the core of the representation of teargas grenades. On the one hand, these grenades operate every single day in the world, and also potentially everywhere: in occupied territories when the colonized reclaim their land as in Palestine or North Dakota, in urban ghettos in the peripheries of imperial metropoles throughout the West, when inhabitants rebel against the colonial management of their life, in any country of the Global South when the postcolonial state fails to realize its old promises, in the center of imperial metropoles during class protests in times of so-called “crisis” of capitalism. Despite their pervasiveness in the everywhere-and-every-day, teargas grenades are definitely not seen as everyday objects of modern life. Teargas grenades are associated with the logic of event. A teargas grenade explodes with an aura of spectacle, appears during a clash and supposedly in response to a given event. Although the metropolitan leftist activist may occasionally experience the effects of teargas grenades, the latter do not compose an everyday aspect of their life. Toxicity, in our colonial context, is an event only for the privileged while it composes a fundamental aspect of life for the colonized.

The combination of the spectacular aspect of the explosion and natural focus on the damages and death caused by teargas grenades produces a form of disinterest for their everyday life: their production, their link to modes of thinking and, above all to the everyday process of oppression leading to the experience of gas. We instinctively tend to look at teargas grenades as if they suddenly appear when an agent of repression throws them, without questioning how they reach these hands, how they were thought up by the master and what they point to in the structures and systems of thought that rule our lives.

The Gasing Industry: Transnational Cartography of the Police Infrastructure ///

When leaving the aura of spectacle of the explosion, one can turn the gaze to the transnational infrastructure that represents the production, promotion and dissemination of teargas grenades around the world. Since killing has been made a business, teargas grenades follow rules of production along classical lines of transnational capitalist distribution. Grenades are distributed along particular modalities that reflect relations of power between states and armies. The lines of distribution illustrate neocolonial relations of power between metropoles and colonies. These networks also bring to light already obvious alliances between states, such as the Israeli occupier receiving the weapons it does not itself produce from the U.S., and Colombia from Brazil. 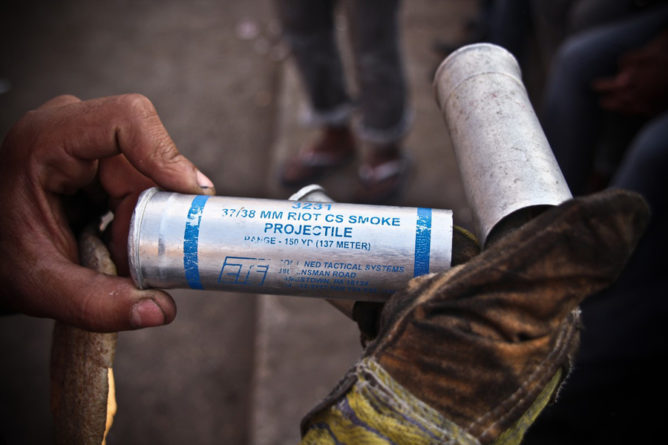 A few clicks on some of the most mainstream parts of the internet allow one to gather tactical and concrete information, such as locations production sites, official contracts, etc. For example, the grenades used against the people in Egypt during the 2011 revolution were the same as some used in Tunisia at the same time, which were also found in occupied Palestine. They are produced by Combined Systems Inc. (brand name Combined Tactical Systems — CTS,) a “tactical weapons company”, whose main production site is in Jamestown, Pennsylvania, USA. The lines of distribution of CTS follow the lines of U.S. policies: in this case, the support of the genocide of Palestinians and of the Egyptian and Tunisian dictatorships. CTS clients include the U.S. Army, U.S. Customs and Border Patrol, the U.S. State Department, Rafael Advanced Defense Systems and Israeli Military Industries — both of which are weapons companies based in occupied Palestine. But CTS also exports to Yemen, Germany, the Netherlands, Greece, India, East Timor, Hong Kong, Argentina, Chile, Bolivia, Guatemala, Thailand, Trinidad and Tobago, Cameroon and Sierra Leone. In France, where one of the new president’s first decisions consisted of purchasing 1.2 million grenades — including teargas — for the police on a 4-year contract, the exclusive furnisher of the police is ALSETEX and the location of its factories is available to the public.