“Story telling reveals meaning without committing the error of defining it”
Hannah Arendt, 1962

The idea behind this article goes back to a conversation in a classroom at an architecture and urban planning institute in Delhi. The students, a majority from the city, who would go on to build and plan for the city, had not heard of the anti-Sikh pogrom that had affected large parts of Delhi in November 1984. Violence triggered after the assassination of then Prime Minister Indira Gandhi, by her Sikh bodyguards, had culminated in genocide against the community, which had made Delhi its home after the partition of British colonial India into the nation-states of India and Pakistan. If one imagines drawing a map of violence in the city, it would probably not leave a single area unmarked. However, in the public and pedagogic sphere, somehow a mnemonic failure ensues. This text attempts to trace the contours of one locality in Delhi that was severely affected by the 1984 riots, as well as its interlaced topography of survival, with several other post-colonial events in and around the Indian subcontinent.

In post-partition India, Delhi served as a refuge to the Sikh and Hindu families escaping from Pakistan, in one of the biggest migrations of the 20th century. Through its constant association with violence, riots and looting, the city’s relationship with those who sought refuge in it is marked with Stockholm syndrome. Survival meant living with its pathologies. The contiguous areas of Bhogal and Jangpura, which accommodated the influx of partition refugees, are now also inhabited by people from many communities affected by war, including northern Pakistan, Afghanistan, and Kashmir. Streets, stories, and built environments in this locality mark the evidences of violence, memory, death and survival of its different refugees.

Urvashi Butalia, in her book The Other Side of Silence (1998), narrates an incident that occurred on March 13, 1947, in which a group of Sikhs were attacked and killed in Rawalpindi (now in Pakistan). Every year at a gurudwara (Sikh place of worship) in Bhogal–Jangpura, a prayer meeting is held as a memorial to the widows of the Rawalpindi incident. The set of stories about the Sikh community in this area provides continuous narratives of endurance and survival. While conversing with the older Sikh residents in the area, their reports and anecdotes often jumped from one incident of violent experience to another, traversing different spaces and timelines. “What we had seen during the partition, we got to see again in 1984,” said an old Sikh gentleman from Bhogal.

Each time I asked about the trucks being burnt in Bhogal, people pointed from one street to another, repeating, “Trucks were burnt here, trucks were burnt here.” “There was curfew, we could see the smoke coming from that side,” I was told. It seems that the streets had all become smoke and whispers of what was being burnt, trucks but also people. “They pulled Sikh men and boys out and burnt them alive” is another repeated story one hears of the violence that marred the city. The Bhogal narratives connote a sense of pride through repeated motifs of self-protection and survival. The young priest at the main gurdwara exclaimed, “They came with burning balls of wool and threatened to throw them into the gurdwara to burn it down, but we were able to hold fort and protect this! Ours was one of the only few gurudwaras that were not burnt during the days of violence.” The priest is 26 years old,born nearly ten years after the 1984 violence, but he narrated the story as if he had been an actual eyewitness. He gave me the contact numbers of many older Sikh men, adding, “You can always read what happened but it is different to hear their stories.”

Testimonies and court cases are many, as are witnesses, and the stories never stop telling themselves. An elderly woman who runs a small grocery store explained that the shops were shut for days and that she had to hide away. Do we let go of every word to find its way onto the page, or do we let the street tell its own tales? Other people told me, “The Texla TV shop was ransacked, and we don’t know what happened to its owners. When the army came in, some people even left the looted televisions back on the road.” “Some trains pulled up with bodies of Sikhs, we didn’t know who had done it; the city was a fortress onto itself.” “Why do you ask about 1984? Will this bring justice and why do you want the younger generations to know? Let them not know, let them forget.” Perhaps writing about it does not bring justice but maybe ‘surviving it’ does, I wished to tell the old, slightly agitated Sikh gentlemen.

Hannah Arendt, departing from Heidegger’s “being toward death,” explains natality and plurality as continual aspects of human life. Natality, located much more in her own biographical context, is the ability of human life to begin anew and undertake action to start again, while plurality is an aspect of human existence that she uses in order to explain the ways in which people reveal and express difference or uniqueness and communicate it to the world, so as to then be able to live in it with others.

The street is embedded with stories of violence, looting, anger, and sadness, suggesting another archival quark, something known only in its effects; that of war and bombings in the region, as well as the countless refugees. Refugee populations from Kashmir began to come and settle here after the second Intifada in the late 1990s. Similarly, the Afghan wars led to a large influx of Afghani people to Bhogal and Jangpura. Refugees were given sanctuary by others of similar dispossessions and today a space emerges that has the endurance and experience of absorbing pluralities. Today we can hear Pashto, Dari, Kashmiri, and Punjabi that all resonate on the street, especially in the area now called “Kashmiri Park.” A staccato of languages, wars witnessed in different regions, and violence endured have settled in and around this park, where the banal everyday ensues.

The metonymic chain of signification and intimacies with cities and areas, now part of another country, inhabit this area. Shops with names such as Lyallpur Cloth House, Kadimi Sweet House, and Lahore General Store all provide the street with the archive of a memory. These shops also unsettle the archive of the partition, which had categorically separated the two countries and its people. One wonders if there is some Delhi in Lahore still, as there is so much Lahore in Delhi. If not as names, the two continue to co-exist in each other, through taste, food, music and language.

Another signage has begun to emerge in Bhogal in the last few years, namely the Perso-Arabic script. A medical store run by a Sikh shopkeeper seems to have two names, “Guru Nanak” (after the Sikh guru) and “Afghan Medical Store.” Its owner explains that he had the signage changed last year since his main clientele were Urdu and Dari speakers. There is the “Qandhahar Ice-Cream Shop,” Badakshan bread makers, Kabul general stores, and many traces of other lives and memories. The street is both the material evidence and the materiality through which people rebuild and continue their lives. In it, an anatomy, a body and its signification become inseparable aspects of one field of existence and survival.

The topography of survival accounts for itself, through petty disputes, adaptive property dealers and prices, a thriving competitive marketplace, kinship networks, everyday precariousness, conviviality and a vita activa, the life force that induces this survival. 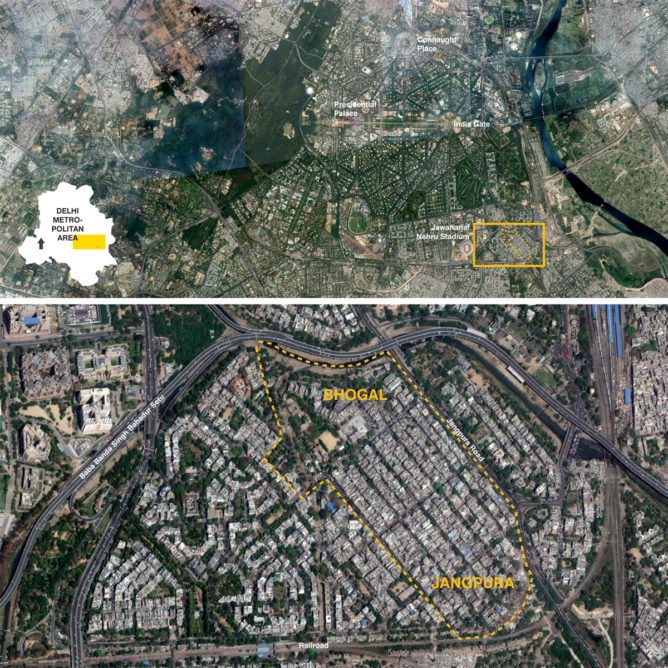