The prison industrial complex is a perpetual cycle of incarceration characteristic of the judicial system of the United States. The term “prison-industrial” reflects the view that those within the incarceration system are kept there as a solution for social or economic problems stemming from government and industrial overlap. Typically the prison-industrial complex uses the surveillance, policing and imprisonment capabilities of the incarceration system to control those within the system. One of these control methods is the “Panoptic Device”, which is designed to maintain continuous surveillance on a subject efficiently and economically.

The modernist era prison was based off the Panopticon with wings of prison cells connected to central administration areas which control the circulation of visitors, inmates, and employees into areas within the prison; this design assists the modern, multi-layered panoptic device. In the confines of Rikers Island, the movement within and between facilities can be monitored and controlled through the first layer of the modern panoptic device which utilizes modern advances in surveillance such as CCTV, electronic monitoring anklets, and computer controlled access methods. The second layer of the modern panoptic device is seen in the physical isolation and separation of the incarcerated from those of similar circumstance, which is seen in the surrounding large open areas of the Rikers Island facilities. These facilities stand in stark contrast with the increasingly dense urban character of New York City and the few areas of open green space within the city. The third layer is the isolation from the general population, embodied at Rikers Island by the use of a single bridge and service by a single bus route. These 3 layers constitute the permanent, physical manifestation of the modern panoptic system, but the nature of our digital society allows for the system to extend beyond the prison walls and into everyday life.

Public housing is usually the resultant residence of newly released inmates who find it difficult to secure employment in a field that would allow them to live a regular life. These project areas then become host to destitute and desperate individuals who usually resort to crime to make ends meet and eventually ensures their return to prison. Like the Rikers facilities, project housing features an unusual amount of green space in stark contrast to the surrounding urban geography. The design of project housing is also chillingly similar to the panoptic facilities of Rikers, with cruciform footprints radiating from a central circulation node. However unlike a traditional panoptic device, public housing projects reverse the system where the many inmates are observed by a single guard tower, here the tower and its inhabitants are under the eyes of the rest of the city population.

In the boroughs of New York City, the density of the urban fabric compels builders to use nearly every square foot. This typology is reversed at the project where the dense cityscape gives way to towers surrounded by green spaces. Another aspect apparent in the layout of the projects is that standing in a particular area allows an individual multiple view angles of different buildings. While panoptic devices or practices in the project areas are a key component to understanding their relationship with Rikers Island, another aspect is the correlation of poverty and imprisonment.

The Panopticon, through the complete control of the sight-line, or gaze, controls the behavior of the incarcerated individual and ensures order within the prison. The project housing typologies of New York City and the design of Rikers Prison, do not simply mimic these panoptic qualities, but improve upon them by utilizing 21st century technology to extend effects of imprisonment outside the walls of the prison. The modern panoptic device is thus an ever-growing, ever-intrusive system of perpetual imprisonment that encourages the continuation of the cyclical incarceration system. 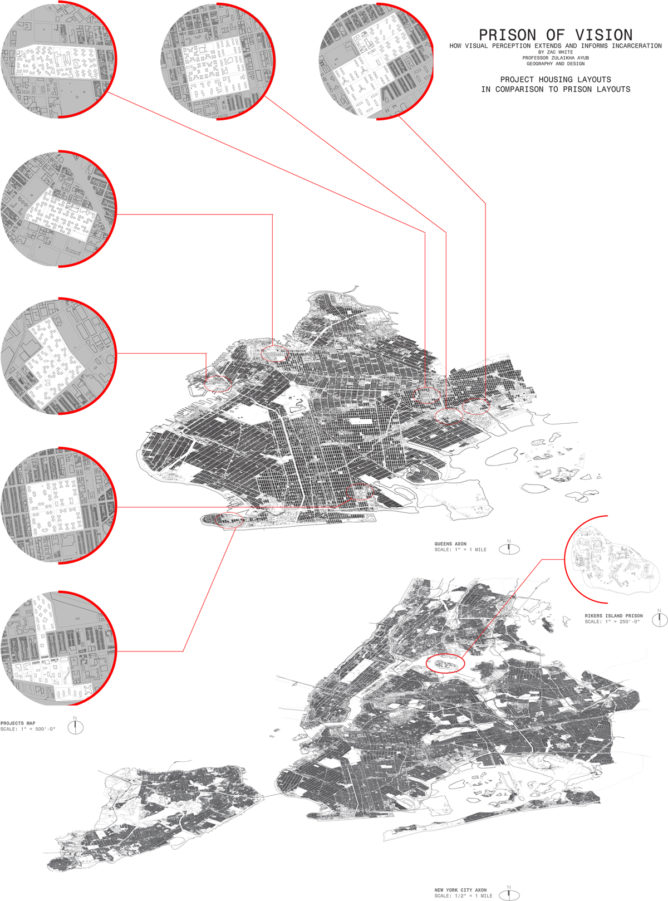 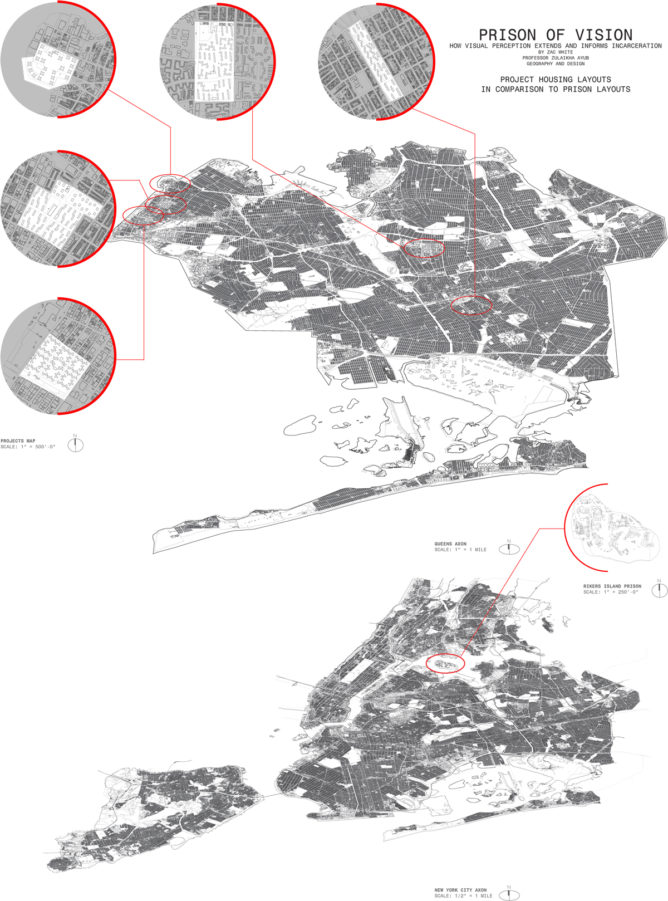