Article published in The Funambulist 11 (May-June 2017) Designed Destructions. Click here to access the rest of the issue.

All photographs by Edith Roux

In 2009, the “reconstruction” project in the old city of Kashgar, initiated by Chinese authorities, raised many critical and hostile reactions around the world. Located on the ancient Silk Road and once the capital of several major Central Asian kingdoms, the city of Kashgar is not only representative of the Uyghur identity, but also a sacred place containing the history of Turkish people. The demolition of the old city of Kashgar is seen through the diaspora but also by the various human rights organizations and international media sources as a willingness to project a narrow vision of China by burying the traces of Uyghur civilization. Two years later, Kashgar was paired with the most prosperous coastal city of China, Shenzhen, to transform the old Uyghur city into a modern Chinese city. Why is this modernization so hostile? What is the motive of the Chinese authorities in this project to transform a city located 5,000 km from Beijing? 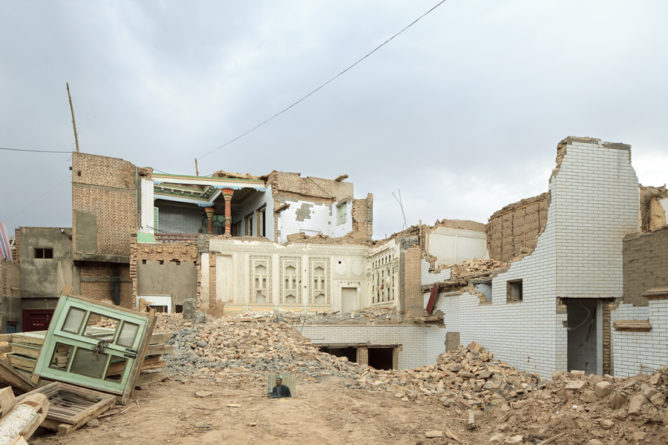 The Uyghur people, who speak a Turkic language traditionally practice a Sunni Islam, and live predominantly in Xinjiang Uyghur Autonomous Region in the northwest of China. Numbering more than 11.2 million, according to China’s most recent census (2014-2015), they remain the ethnic majority of the region, representing 47% of the total population. They are considered the region’s indigenous inhabitants, as well as the descendants of the Uyghur kingdoms (the Buddhist Uyghur state and the Muslim kingdom of the Karakhanids) previously occupying these territories. Officially conquered by the Qing empire in 1884, when it was given the name Xinjiang (劤쉰), which means “new frontier” in Chinese, this region was claimed by China as an inseparable and historic part of its national territory. Bordered by Russia, Mongolia, Kazakhstan, Kirghizstan, Tajikistan, and Pakistan, the Uyghur Autonomous Region is crucial for China on its geopolitical chessboard. Comprising one sixth of China’s total territory, it is the largest administrative entity, with lands overflowing with natural resources, notably oil, natural gas, and coal.

Ravaged by civil wars following the fall of the empire and the Japanese invasion, the central government deserted the region, much to the benefit of nationalist Han governors from the interior, who brought daily life to the brink of chaos. Out of this mess the First Eastern Turkistan Republic was born, lasting only from November 1933 to February 1934. The foundation of this state was the result of a Uyghur renaissance inspired by the Jadids — Tatar, Uyghur, and Uzbek intellectuals who set out at the end of the 19th century to reform Turkic culture and its version of Islam — the term “jadid” is Arabic for “light.” Crushed by the Soviet Army and the forces of Sheng Shicai, the brand new governor of the region, this new republic was immediately buried. The next generation of Jadids, both pro-Soviet and profoundly nationalistic, founded the secular Second East Turkestan Republic on November 12, 1944, which lasted until the proclamation of Communist China and the restoration of power to Beijing in 1950.

Kashgar, Pride of the Uyghurs ///

Kashgar is one of the oldest and most famous cities of Central Asia. Located along the ancient Silk Road, this mythical city was the capital of many Uyghur kingdoms in the past, most notably the Karakhanid dynasty, the Chagatai dynasty, the Emirate of Yaqup Beg, and the First Eastern Turkistan Republic. Considered by the Uyghur people as the cradle of their post-Buddhist history and civilization, Kashgar was also the native home of two major intellectual figures of the 11th century: the linguist-anthropologist Mahmud al-Kashgari and the philosopher Yusuf Khass Hajib, celebrated today from the Xinjiang to Turkey, and all the Turkish republics of Central Asia and the Caucasus in between.