The project is not a solution for Post-War Gaza; rather, it is an analysis and experimentation with architecture as a visual and aesthetical language within different political power scopes. In order to accomplish this, we had to study the colonial matrix at work in Gaza, which consists of colonial warfare (siege, surveillance, etc) and neo-colonialism (neoliberal economy). Based on our analysis, we constructed a lexicon of representations in the milieu of three deliberate approaches to the constitution of architectural identity: “opposition,” “submission,” and “alternative.” Inspired by Frantz Fanon’s conceptualization of “national culture” and “national identity,” we strive to illustrate the effects on the architectural language when adopting each approach.

The “submission” scenario is a definition of identity with total acceptance of the colonial matrix: the identity submits to what is an inherited template. “Opposition,” on the other hand, is antagonistic to the colonial matrix; identity is formed by what it is not (in this case, the colonizer’s culture), and dependence to the colonizing forces remains precisely due to (or despite) its opposition. In the “Alternative or X” approach, an attempt to “decolonize” architectural language is undertaken. Identity exists beyond predetermined structures and the binary relationship of colonizer and colonized, in relation to lost cultural and local values of public, common, sustainable and social equalities that were robbed through colonization. For instance, during the First Intifada, some Palestinian women established local cooperatives to ensure self-sufficiency of food against scarcity.

The drawings show one of the locations that we investigated in our project: the Israeli military post of “Shirat Hayam,” on the Gaza shore, evacuated in 2005. An exclusive space inaccessible for public use and detached from the its natural surroundings, it was used mainly as military dwellings for the Israeli army. If the site were treated strictly in opposition, it would lead to the total annihilation of the colonial infrastructure, since it constitutes the opposite of what is “national.” The produced architectural language would be an abstraction of the “nationalist” architecture, a simulacrum of traditional architecture, in an attempt to impose a certain national identity through landscaping elements such as the planting of olive trees, ignorant to whether Gaza is a suitable environment or not. Although the site would be declared for public use, it would be cautiously patronized and monitored by the Palestinian Authority. In the “submission” (to neoliberalism) scenario, the site would be taken over by the private sector for investments. This would involve total reuse of the colonial infrastructure and its insular territoriality by turning these structures into individualized dwellings.

We instead propose an “alternative” scenario for this site, through which we investigate the notion of the “common” as a collective will and organization, a meso-public space combining concepts from both the common and the public. The “semi-designed” structures would then allow different groups to reappropriate what used to be a colonial space for their own collective use.

Techniques such as ungrounding, unwilling, and unroofing would be employed, transforming colonial military buildings in to public-use structures. This alternative scenario would protect these structures from turning in to private dwellings, resurging and preserving a connection with the surrounding landscape of dunes and sea. 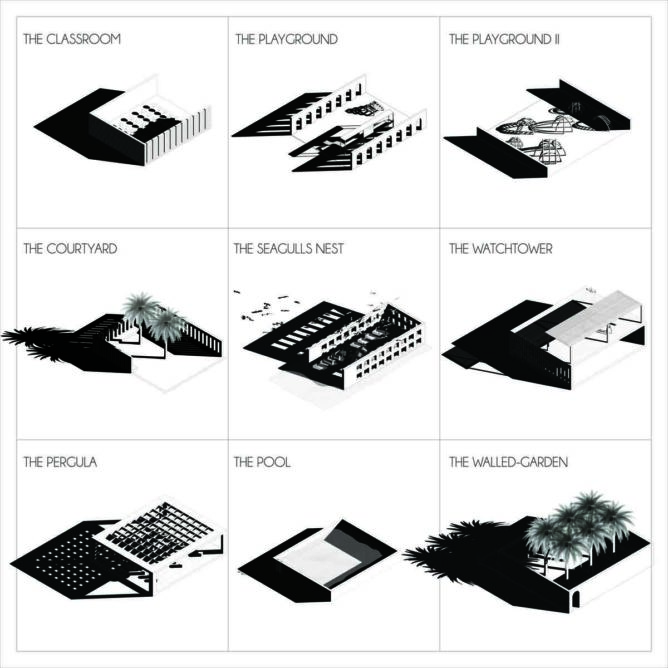 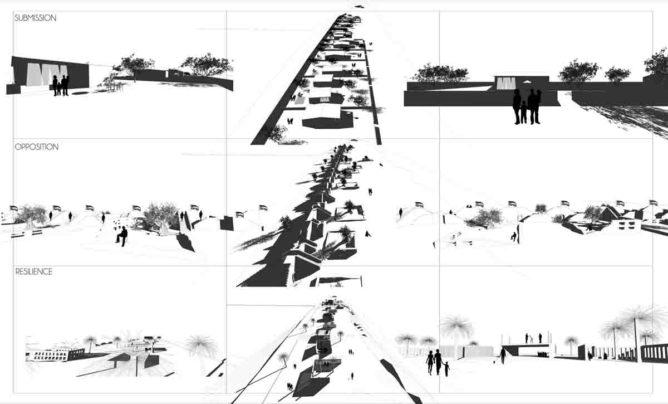