Birth of the Counter-Space ///

French colonial interventions of the Casbah of Algiers in the 19th and early 20th century witnessed the indiscriminate destruction of native Algerian religious and civic edifices to make way for a new colonial urbanism. The lower Casbah was carved out in a Haussmannian fashion, creating wide boulevards and broad squares, in order to accommodate the movement and gathering of troops. In addition, The French built new series of edifices were built in the area to become the new colonial face of the city. The upper Casbah, however, was left to the Algerians, but done so without infrastructural support or maintenance — a colonial passive-aggressive tactic of neglect used to force the area into “natural” demolition. To hold on to their identity and assert their existence in times of colonial efforts to impose power over them, the indigenous Algerian people, in a great act of defiance, banded their resources together and continued to maintain their houses and streets as a community. As sociologist Djaffar Lesbet asserts, the Casbah thus became a counter-space of resistance.

Throughout the 20th century, the Casbah has been was a place of great movement and violence. From the Battle of Algiers (1954-1962) to the black decade of the Algerian Civil War of the 1990s, the Casbah saw the birth of many alternative movements, irrespective of political agendas, that took advantage of its spatial configuration to mobilize against central powers. The Casbah’s circulation networks are complex both in plan and section, making it a problematic area to control. In plan, its maze-like streets render moot the panoptic apparatus, which depends primarily on a clear “all-seeing” field of vision. The narrow shaded streets, which at times arrive at dead-ends, inhibit the “transparency” that the Panopticon needs to function. In section, the steep topography on which the Casbah sits forms a cascade of houses, resulting in redundant, superimposed and intersecting systems of circulation paths (tunnels, streets and terraces) which provide opportunities for subversive movement and counter-surveillance of intruders.

A decade and a half after the end of the Civil War, the losses suffered during the 1990s still resonate deeply in the collective memory of Algerians, and have resulted in a lack of social, political and cultural agency. With a loss of some of the brightest thinkers in the country, the youth grew up in a culture of submissiveness that encouraged inhabiting the periphery of society. Inspired and motivated by the inherent character of agency in the spatial configuration of the Casbah of Algiers, the project presents an urban and architectural strategy in the form of a reimagined counter-space, aimed to extract agency from the Algerian youth of today.

A macro circulation path is established through existing scaffolding above the streets to create a new parallel network system within the Casbah. The system links a fragmented anthology of light temporary structures or towers constructed throughout the Casbah, each holding a program of cultural interest. The temporary structures, through physical situating and confrontation, will reinject the youth into the heart of the city. By imposing youth upon context, the context in turn imposes itself upon the youth. With this confrontation, a contemporary counter-space is created and results in a generation that is presented with a platform for expression and action toward self-determination. 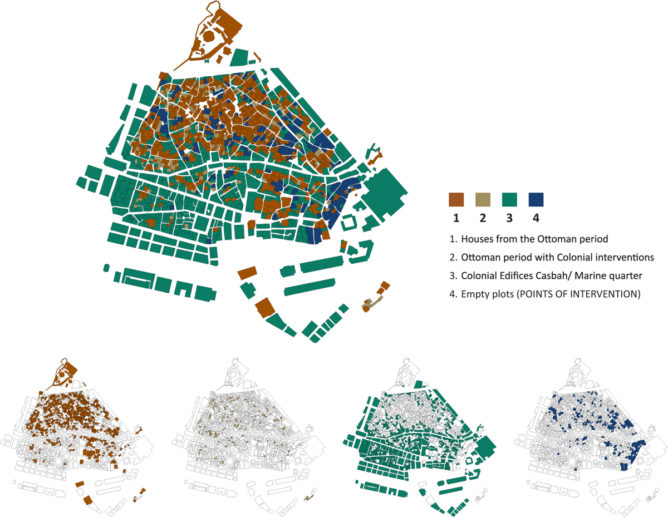 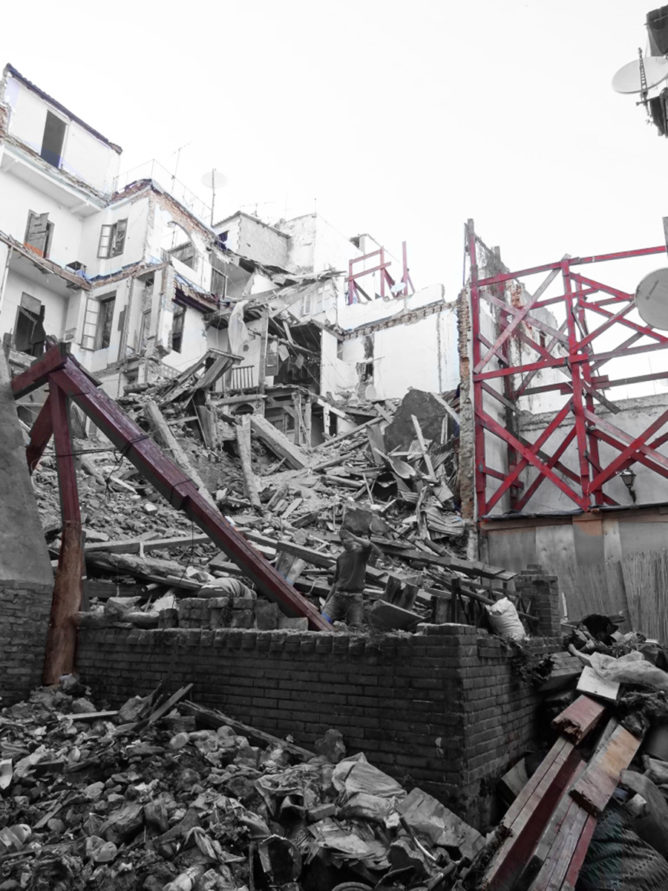 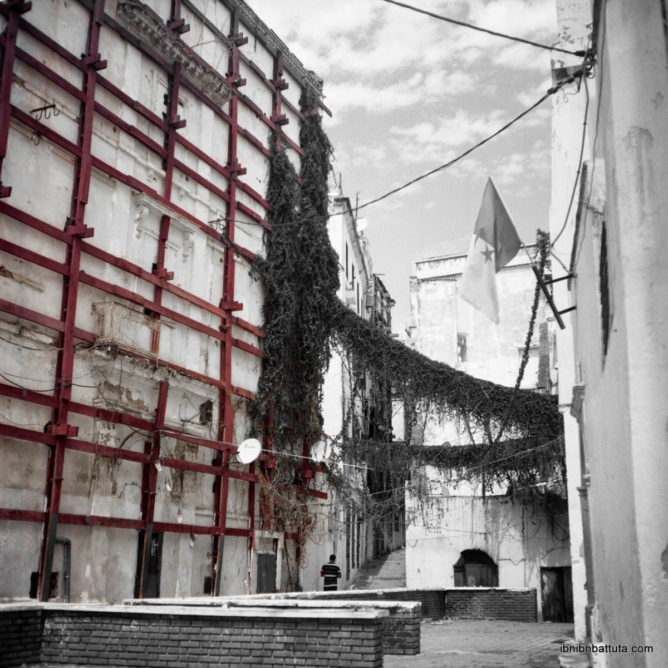 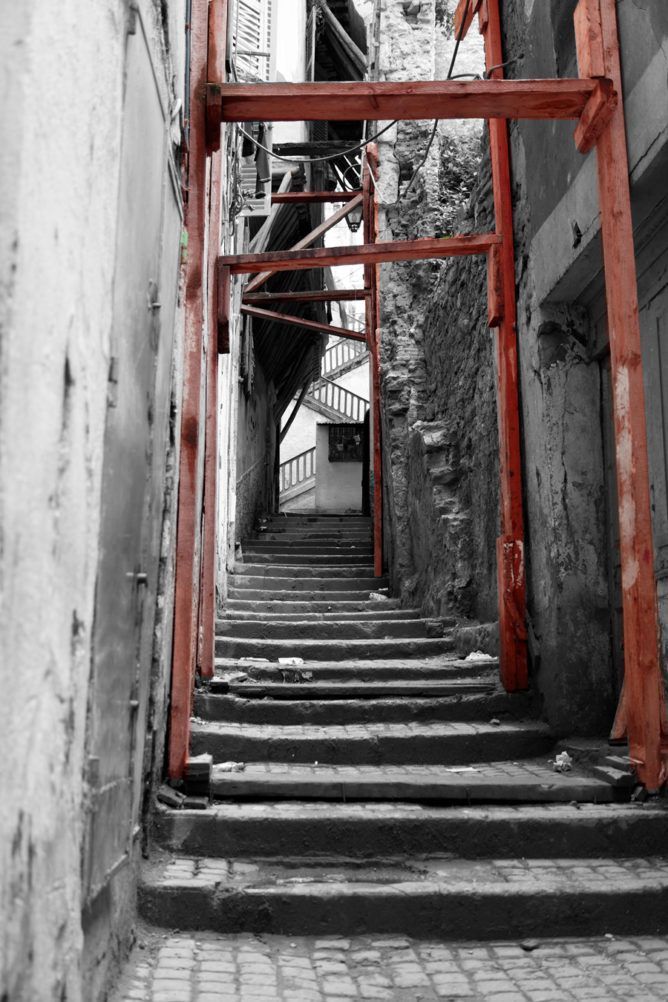 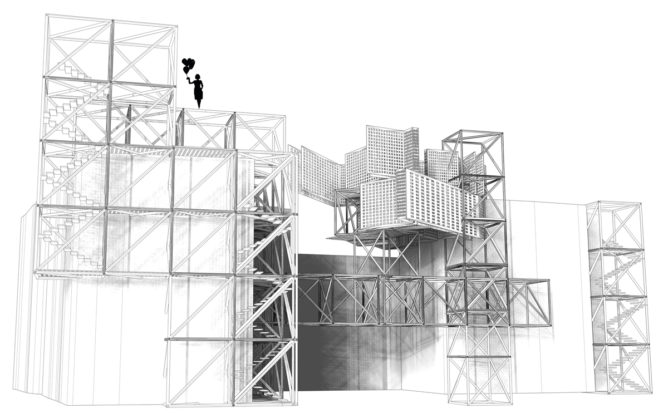 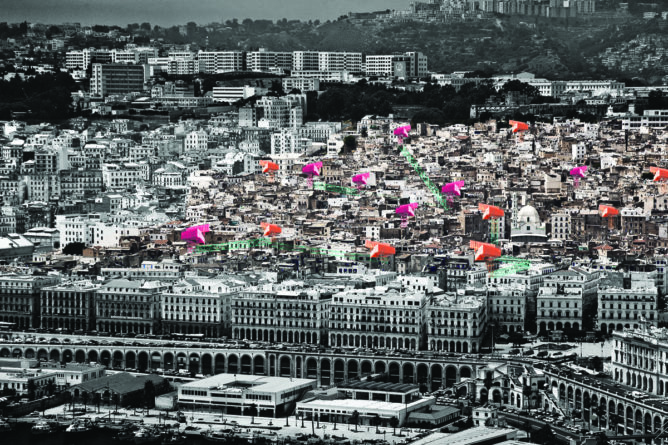