In the past two decades war has littered Iraq with its residual military urbanism and has thus changed the face of Baghdad drastically. War manifests itself with concrete blast walls that cover miles where street level interaction used to occur. Once an immersive experience, walking the streets of Baghdad today offers nothing but blank, grey concrete structures lining the main access roads and covering the city’s main landmarks.
These concrete objects are lined along major roads and districts of Baghdad constituting a 4 meter high, 230 km long wall over Baghdad. The map above is the latest available survey of the existing walls of Baghdad. It shows 44 continuous walls spread around the city. 50 fixed checkpoints along with a large number of random checkpoints are spread all over. In total 50 residential areas and 60 markets are included within the walls, and most of the main streets are enclosed with barriers made of these individual concrete blocks.

The walls are not only a manifestation of sectarian divide, creating zones for Sunni and Shiite, poor and rich, Muslim and Christian, but these walls also act as psychological segregators. Their physical form is forever imprinted onto the genius loci of the city; the notions created of social and religious class divisions persist far beyond their physical form.

These blast walls, or Bremer walls have an obliterating impact on the memory of Baghdad; a sense of alienation and loss in direction prevails upon walking the streets of the city. The walls have left neighborhoods unrecognizable. These walls have witnessed firsthand the brutality of war and the blood baths of everyday civilian bombing. The space around them is related to power, an expression of authority and control. The inhabitants’ right to the city and right of movement is lost in Baghdad.

This body of work explores the walls from a civilian’s point of view and introduces a Baghdadi Flâneus as the city’s wanderer. The intention is to study the experience of walking next to the walls, and recreate the duality of senses that they generate. These walls hold binary meanings for the inhabitants; they play on the duality of security and insecurity, public and private, the media’s projected image to the city and the city itself. The space around the walls is not public, but only quasi-public; a space where there is a high level of surveillance and control.

In order to give back the inhabitants right to the city a methodology of designing within an architecture of movement was applied. Three architectural interventions where conceived;

-The elevator is designed to perfectly fit the Flâneus’s body and to transport her into a level beyond the wall through vertical movement.
-The Swing is made to play against the walls, and ironically repurpose them through function. The swing also repurposes residual Tank parts for support.
-The pathway is designed to force the Flâneus to confront the wall, and surpass it through the act of walking.

A wall of mirrors runs alongside these interventions, lending them back to the world of fiction. These interventions are designed in a state of loss of the address, to create a metaphor of movement within the walls, and segue towards bridging the city back together. 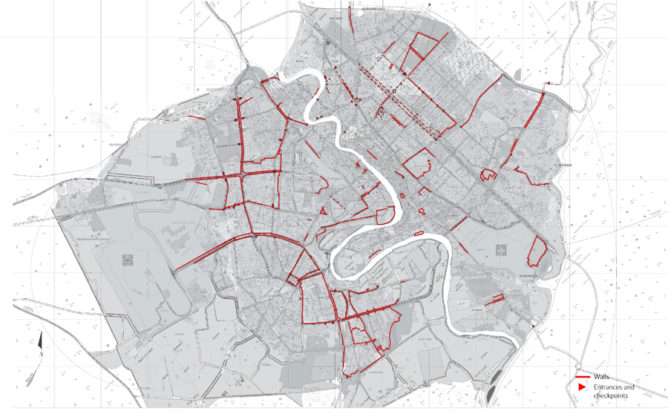 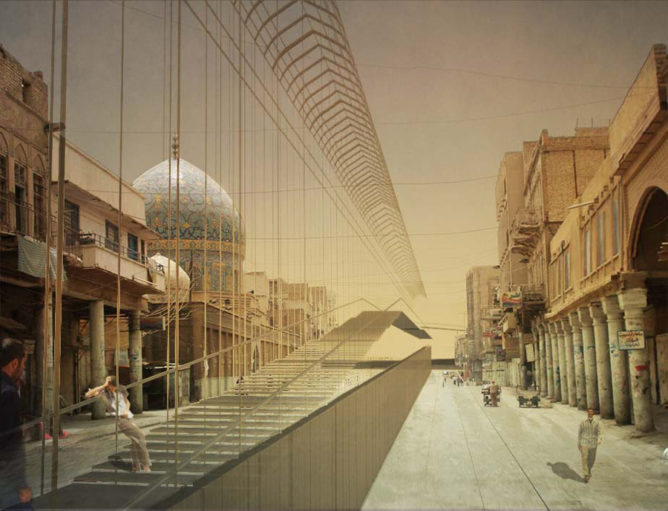