When addressing issues of gender mainstreaming in our city planning and furniture design fieldwork, we often get the same answer from urban planners and city administrators. “A bench is a bench and has no sex!” Although one can hardly argue with this statement, we intend to show how gender is largely excluded from the conversation surrounding the way our cities are planned and furnished. Even when gender is considered, this is often to serve a purpose that has little to do with equal rights or freedom.

Our research points out that, though benches and other urban furniture may be designed for everyone, most of it is used by men. This raises many questions regarding the legitimacy and right to occupy public space and furniture, as well as the real goals animating the politicians and city planners who manage the come-and-go and leisure of city inhabitants and users.

More often than not, administrations tend to respond to the city’s issues with technocratic solutions, rather than looking to the real needs and interests of people using public space and furniture, trying to understand how those who do not necessarily feel their presence to be legitimate in the public space, such as women and other individuals, might be more willing to invest the streets, furniture, steps, frontages, parks, or squares of the city. A territorial landscaping that prioritizes security, quietness and concerns regarding law and order, reveals what is really at stake in urban policies and planning: public control.

The street, one of the last open public spaces (free to all, accessible, inexpensive) is taken away from the public, administered in the name of all, managed, and pacified. Cleansed, partitioned, gated, fortified, unobstructed by leisure furniture, public space is filled with utility poles, advertising and road signs, thus becoming non-existent in terms of promising practice. You can at best watch it, but certainly not inhabit it freely as a person, relax and dream. Urban planning, as we see it flourish, is not for all but, rather, against most: women and men, unwelcome. Homeless, unwelcome. Disabled, elderly, children, unwelcome. Teens, migrants, sex workers, unwelcome. 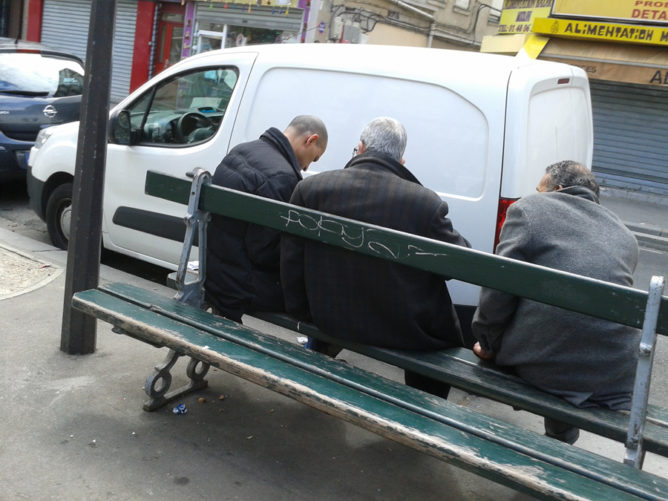 In France, this public control is expressed by our political leaders and city administrators through a double language. On the one hand, the communication leaflets of city councils’ and the websites of municipalities advertise and promote an embellished environment, pleasant, quiet, calm, and safe.
Meanwhile urban equipment itself takes on a more “warlike” vocabulary, which can be found in the catalogues furniture companies promote as an answer to the needs of decision makers: “protective” urban furniture, “access restricting” solutions, wire fences, or protective gear for trees ironically called “corsets.”

Supported by the rhetoric of protection and security, a complete set of defensive paraphernalia is combined with exacting functions aimed at achieving pacification and helping administrations to better control residents. This process has a name: it is called predictive policing. In this regard, we want to propose a critical approach to gender mainstreaming in order to expose how women are conveniently used to legitimate situational crime prevention.

Predictive policing is becoming popular in France: in the many cities we counsel, there is not a single meeting we attend where a situational crime prevention team is not involved. Their members will explain at length how women are a primary target of harassment and aggressions and how public space must be patrolled and monitored to protect them.

The idea that public space is unsafe for women, that women are more “at risk” than men on the street, becomes a self-fulfilling prophecy, leading not only to strong feelings of insecurity, but impacting also the behavior of men, who feel confirmed in their right to own the streets, as well as women, who develop strategies to avoid stressful situations, thus calling for preventive protection from potential aggressors. Among the recommended solutions: more lights, less trees or bushes — they could mask potential attackers — more fences, and, more surveillance cameras.

The same rule applies to children. For them, urban space means more control, less adventure. Despite crime rates continuing to decline, (which should encourage street play and exploration) parents remain exceedingly cautious regarding risks taken by their offspring. Parks and squares now host overly secure playgrounds, cushioned terrains, kids sport helmets and body protection, schools are heavily fenced and wired. The meeting of security and paranoia at its best!

Protection against risk has become the ultimate tool of crowd management. In line with the traditional, heteronormative and essentialist tale, women and children are labeled as “fragile” and led to believe they should be protected, making them central to the narratives cities elaborate to justify the externalization of risk management. “Through planning and furnishing we will make the city safer for you.”

This brings us back to the high stakes involved in introducing gender mainstreaming into city planning. It allows us to unveil hidden agendas and halt the vicious circle of policies centered on safety, where gender is used as an end to achieve harsh policies rather than as a means to reach equality.

Why is gender mainstreaming such an efficient tool to promote another vision of city planning and furniture design?
As we have seen, more often than not urban planning is the result of a technocratic approach: it favors Urbs over Civitas (the city over its citizens), centralized power over “the right to the city,” functional aspects of urbanity over spirit and liveliness. As a result, creativity and imagination are seldom solicited. Furniture catalogues fail to offer a wide array of choices, urban planners tend to repeat the same recipes time and time again, while politicians settle it all with the budget. Applying a gender budgeting lens when considering decisions surrounding city planning and furnishing can reveal a number of interesting things.

Huge sums are invested in outdoor furnishing and equipment each year and gender budgeting raises awareness about potential unequal distribution. By highlighting how choices are prioritized — why one choice has been favored over another and whom it benefits — one can sometimes see strong inequalities emerging. Gender discrimination is sometimes obvious: 50 million euros dedicated to the construction of a new stadium used almost exclusively by men, for instance, is a clear marker. But it can be subtler: the imbalance or domination found while scrutinizing a budget may not necessarily be so clear, but can expose patterns and habits that ultimately favor a specific group or function.

Up until now urban furniture and equipment have been primarily planned by men, with men or male usage in mind, whether this usage is active, such as driving or playing games, or idle, such as loitering. Skate parks, city stadiums, sports arenas, terrains de boules (pétanque fields) are specifically designed to keep men, whether young or old, occupied. Male supremacy on the streets leads necessarily to a male prevalence in public furniture usage, regardless of its function. As the geographer Anne Clerval points out, there is a strong articulation between the material and symbolic dimension of space: “Space can become a catalyst of intricate domination” (“Espace et rapports de domination,” 2015). A bench will therefore take on a sexual marking based on circumstantial factors.

In our everyday lives this materializes as a strong occupation of benches by men. Are women banned from occupying urban furniture? Legally speaking, of course, they are not. But if you ask women if they would would feel comfortable siting by themselves on a public bench, the answer is usually “no.” There is simply too much pressure from passersby, too many clichés about the “public woman” characterized as a prostitute, too long a history of deserting the street, too much internalized self-control.

Rather than addressing this question as a major inequality issue, urban planners and politicians alike tend to suppress benches when they are seen as a zone of conflict, rather than creating the conditions for an inclusive, mixed usage. The same goes for urban furnishing in general: a perceived misuse of benches by men, whether they are homeless or teen-agers, leads to their forced disappearance.

Attempts at limiting male domination in the urban environment tend to lead exclusively to approaches based on security. Perhaps we should specify “a certain idea of male domination,” for it is not all men who author these measures. As we mentioned earlier, teen-aged boys, homeless and, above all, non-white men, are the primary targets of security measures.

On the one hand, this results in the proliferation of a warlike urban furniture; on the other, it leads to the desertification of the streets. This increasingly empty and sterile environment generates ever more anxiety (when walking alone, for instance) as well as feelings of paranoia towards certain categories of men. The vicious circle is thus closed.

The logic currently employed in urban furnishing and urban planning needs to be confronted with a new vision: a holistic approach, capable of introducing a more sensitive and complex articulation between the inhabitants’ diversity, their needs and desires and practical urban functions.

Better lighting makes sense if it creates the conditions to feel more at ease in the lit area, as we can see happening in Strasbourg or Mulhouse; it does not make sense however, if the sole purpose is to discourage ‘improper’ behavior with strong bright spots. A bench might be attractive to a wide variety of people if it allows for different activities and uses and if it is placed in the right surroundings, instead of mutely facing a street or a round-about.

Most importantly, change might require a little more daring in our own behavior. Civitas could take over Urbs, given the right conditions. We have seen Filipino women conquer the Hong Kong city center every Sunday, building their own cardboard furniture, and no action by the local government has been able to stop them. Older women in Aubervilliers, France, have been taking back café terraces on a daily basis for more than two years now, setting an example followed by many. After decades of strict urban regulations, citizens of the 20th district of Paris are allowed to plant seeds on public ground and to build their own furniture to inhabit the streets (almost) as they wish.

These few examples alone reveal the strong potential we possess toward the conquest of autonomy. Could a bench truly have no sex? Could it finally become a universal, comforting, collective device after all?