Chronic Illnesses account for nearly 65% of all deaths in the United States. Many of these illnesses are considered preventable with increased awareness and proper medical attention. Yet, for millions of Americans, when faced with crippling debt, underpaying jobs, and the ever-increasing cost of living, preventative measures rank low in the fight for immediate survival. For those residing in subsidized housing, the ability to behave proactively is further compromised as their resources are already stretched to the maximum. But what if, instead of adding to this burden, our housing could aid in the solution? What if we began to treat the subsidized home as the first step in preventative care?

Immediately, with this question we are thrust into a centuries old debate about which of our poor are “deserving” enough to warrant additional tax dollars. In search of a deeper truth, this thesis skips that debate entirely. Rather, it aims to revoke the American misinterpretation of Modernist values that has led to the present equation of the minimum as the optimum. It abandons all self-satisfying notions of ‘adequate’ or ‘satisfactory’ or ‘tolerable’ and assumes that the only truly fair solution is the one that produces the maximum utility for those who are most in need. This is a project about a struggle deep within the American psyche. It is about dignity. It is about justice. This is a thesis about mold.

Mold is a better indicator of social disorder than broken windows. It is requires only three things in order to grow: a food source, moisture, and a level of neglect. However, this mold exists on a spectrum from the literal fungal spores to the systemic urban failures wherein the food and moisture present at the scale of the unit are manifested through larger social inequities at the urban scale. Thus, the design intervention must take on a multi-scalar approach. The three tiers addressed in this design are at the scale of the unit — where the focus is on the prevention of physical mold growth — the scale of the building —where the design will begin to address some of the long-entrenched structural inequities related to public housing and race — and the urban scale — where an understanding of the greater issues at play will begin to combat the systemic mold that plague some of the most well-intentioned initiatives. As the guiding question remains: how can we start to think of the subsidized home as the first step in preventative care, it is necessary to position the entire conversation first and foremost within the realm of public health. The city of Richmond, California has already recognized the need to address all aspects of public health. In January 2013, the city released its version of the “Health in All Policies” document in which it directly addresses the need for policymakers to actively engage issues of race and inequity. This thesis, sited adjacent to the Richmond BART station, is designed to build off of this document through addressing the city’s decided lack of affordable housing and services. 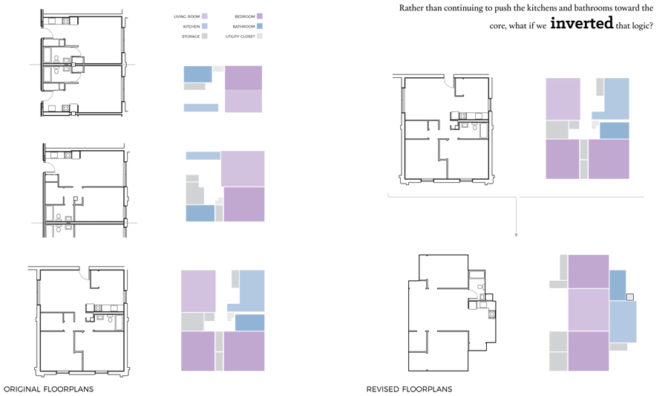