It is not news that the roots of racism in South Africa arrived with Europeans at the Cape in the mid-17th century. However, it was not until Jan Van Riebeek and his henchmen planted an almond hedge with thorny bushes to wade off the natives from what he considered as the pristine paradise of whiteness at the Cape Peninsular that the elementary particles of racism in design were planted. Apartness in spatiality as defined by racial hegemony would only flourish in the years to come regardless of who was at the helm, be it the Dutch or the British or the Boers of Afrikaner nationalism of the mid-20th century in what had become widely known as Apartheid. In many ways one can read in Jan Van Riebeek’s nascent segregationist project the expansion of what might be termed ”global whiteness” that has come to define not only colonialism but, also, global capitalism.

Defining design is a fraught and complex issue for it pertains to nearly every way in which reality is perceived or what one might call “social constructivism.” However, for the sake of this article we shall constrain it to physical readings, rather than abstract ones. We shall look, then, at the way in which tangible institutional artifacts — from the built environment to products to the way in which society was designed to reflect racist ideology — have shaped contemporary South Africa since the European invasion of 1652.

If we are to take design as “a plan or drawing produced to show the look and function or workings of a building, garment, or other object” — in this case, the building being white supremacy, the garment being the ’civilizing’ project of Europe, and the object being the native population — we might want to start with the VOC’s (Dutch East India Company) slave codes of 1754 at the Cape. The way in which racism shaped South Africa can be traced as far back as the early VOC settlers at The Cape. The slave, then, is the first object of racism, designed to reflect and to contain it, and, at all times, to perpetuate it, whether in the eyes of ”the master” or to fellow comrades in the clutches of structural, racial oppression. The slave codes of 1794 were created to formulate the means to naturalize racism within the psychologies of the invaded, the East African and Asian slaves, as well as the Khoi and the San and any other indigenous population of South Africa.

Slaves were not allowed to wear shoes nor ride horses or wagons in the street. They were not allowed to sing, whistle loudly, or make any other sound at night. One, then, finds that in the Cape Town of today and elsewhere in the country, this racialism inferred in who is permitted to make a sound and who isn’t still permeates much of contemporary South Africa, with the Blacks being constantly assigned the title of being “loud” for merely existing, especially in formally white suburbs. The ”shoe slave code” is one of the most insidious ways in which racist design etched itself in the psyche of the marginalized. For the first time, it created a European aestheticized class stratification among the marginalized with regards to second or third class citizenry in the colony by ones proximity to the center of whiteness which was defined by how one dressed. For instance, Black slave foreman, later on, were allowed to wear shoes in order to establish their authority over the colony’s majority Black subjects.

Now, if one were to take a cursory look at the way in which the Xhosa culture signifies new men, one finds that it rests in the attire: the kakhi checkered blazer and the English county cap. One reads in this attire the colonial ideas of sophistication which were introduced by the colonial project. This, in a sense, is the internalized colonial mentality by the subjects to avert the historic ridicule of being underclass, even though structurally and not aesthetically, you still remain Othered. The modern hyper consumerist culture of conspicuous spending among previously oppressed Black South Africans still speaks back to the “shoe slave code” in many ways, for it appears as a means — at least a psychological one — to overcome the historic aesthetics that defined who was a slave and who was not; who was closer to the center of power and who was far from it.

Jan Van Riebeek’s thorny segregationist hedges found reiteration in the Urban Areas Act of 1923 which required coercive removal of natives by local authorities to designated townships. These authorities, called “native advisory boards,” were tasked to regulate influx control and to remove surplus people, namely Africans who were not employed in the area. The initial forced removals of Africans from the Cape Town city center resulted in the founding of one of the first Black townships in South Africa, Langa, which was built next to a sewage. This particularity of the site set aside for the building of Langa Township, as much as the Act itself, doubly shows racism in sharp relief. The township still stands till this day. This was 27 years before the Apartheid government’s Group Areas Act of 1950, a legacy which has survived in the post-apartheid state, after the democratic moment of 1994.

To get a full sense of the means in which racism defined the way in which South African cities were designed one only need to drive to and from Cape Town International airport. Along the periphery of the city of Cape Town, is sprawled a cluster of shacks and shanty town designated for poor Black communities and, further, the colored and Indian suburbs, before reaching the city center. Such a spatial organization does not correspond in any way to an organic mobility of people settling around the city.
Instead, it constitutes another means through which Apartheid spatiality designated different areas to certain races following the logic of situating whiteness and white bodies at the center. This spatiality defined who was the most and the least oppressed, who was a citizen and who was an outcast, who had access to resources and who was denied this access. Townships — it is worth noting — were designed with the express intention to pathologize Black bodies; they were, and remain, flung out along the reams of South African metropoles, festering in poverty, crime and disease — a constant reminder of one’s place in the social hegemony of the country. This is not an accident of history but a deliberate spatial design which began decades before the official racist institution of Apartheid was implemented. The Reconstruction and Development Programme (RDP) of Nelson Mandela’s tenure as president only further exacerbated the problem. Contrary to popular sentiment, Mandela’s administration did not even begin redress past injustices through RDP but reproduced them to a scale that surpassed that of the Apartheid regime. The diminutive scale of each of these RDP homes is a vexed metaphor for the way in which the majority Black South Africans was squeezed into only 13% of the land after the implementation of the 1913 Land Act. This simple fact is reflected in the emergent political call to have land taken back from its false owners and given to the rightful heirs, the black majority in South Africa.

To fully appreciate racism in South African design one must consider the way in which its laws were formulated to affect the way the land was allocated and movement and black bodies were restricted in the centuries preceding the Afrikaner nationalist’s apartheid state of1948. That particular moment in South African history of institutional racism is best signified in space by the Voortrekker Monument in Pretoria. The monument is said to commemorate the Voortrekkers who left the Cape Colony between 1835 and 1854, but in effect, it is a physical embodiment of racist Afrikaner nationalism and manufacturing Afrikaner superiority through mythologizing its history. The granite structure was design by the architect Gerard Moerdijk. He fashioned it after Völkerschlachtdenkmal (The Monument to the Battle of Nations) in Leipzig. This grandiloquence was meant to tease the bruised ego of a race which suffered tremendous losses in the wars with Britain in the late 19th century. One of the key features of the monument is the laager structure built around the phallic edifice which shoots up to the Pretoria sky. It is a clear symbolism of the supposed virility of Afrikaner paternalism. It draws from the racist notion, which is scripted in some of the panels at Voortrekker Monument, that the black African was a savage who had to be civilized — read: pillaged — by any means necessary. The laager was a structure to keep out the African, in the same way that Van Riebeek’s thorn hedge was. This peculiar practice of exclusion finds sharp relief in the current design consideration pertaining to electric fenced suburban complexes.

Although the common justification for these modern laagers is attributed to the levels of crime in the country, one must be certain that by “crime” it is meant “the poor Blacks.” In the last analysis one begins to see that by manufacturing the Africans as Others, by stripping them of their culture, spirituality and casting their out of his own land, what the colonialists were effectively doing was to create criminals out of them and a disease out of their existence. This was achieved through centuries of untethered violence and humiliation and theft and manipulation. 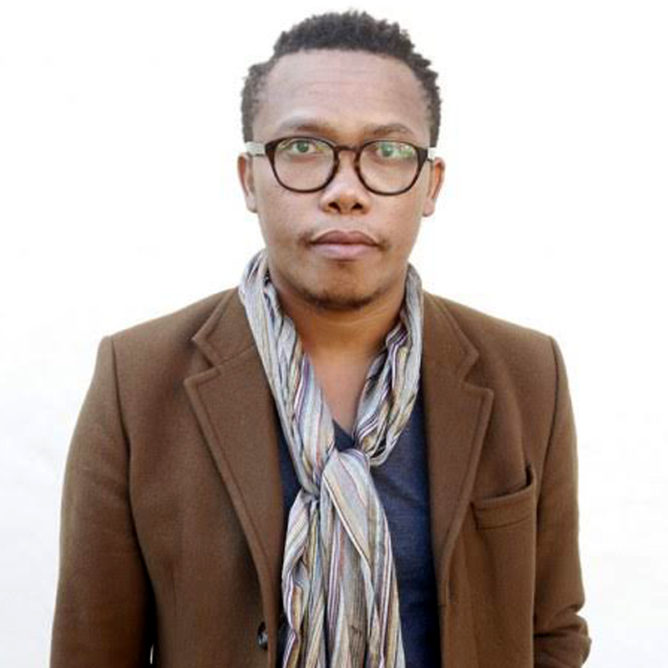 Lwandile Fikeni is an award-winning art journalist, art critic, culture writer and essayist. He is currently completing his post-graduate studies in Journalism at the University of Witwatersrand. He lives in Johannesburg. Read more on his contributor page.