At present the U.K. has nine detention centres — or ‘immigration removal centres’ (IRCs) — that can detain 3,566 individuals. Unlike the ‘open’ reception centres that are common to other European countries, British IRCs are highly secure, ‘closed’ institutions that resemble prisons, mimicking many of the architectures, security features, and tactics of confinement. Several centres are former prisons and most are operated by prison giants like GEO Group and Serco.

Last year, nearly 33,000 people were detained — an increase of 11% from the previous year — and approximately 15% of whom are women. Migrants from Pakistan, India, Bangladesh, and Nigeria constitute the majority of those detained, reflecting the legacies of British empire and patterns of colonial and postcolonial migration, as well as its post-war immigration policies tying race, gender, and nationality in processes of inclusion and exclusion.

Those who are detained include: asylum seekers; foreign national ex-prisoners who have completed their sentences and are facing deportation; visa over-stayers and individuals accused of breaking the conditions of their visas; and undocumented migrants whose identities are being determined. Many detainees have lived in the U.K. for a long time, having grown up and/or have families there.

People are detained for administrative reasons — to determine their ‘real’ identity, prevent absconding, and facilitate removal or deportation. Since they are not being charged or punished for criminal wrongdoing, detainees are confined but with fewer mechanisms of oversight and lesser legal standards than that available under the criminal law. The U.K. (as with Canada and Australia) is unique among ‘western’ countries for detaining individuals indefinitely, with no maximum length of time a person can be confined.

The following stories of immigration detention are visualised by Tings based on ethnographic research done by Sarah from September 2013 to August 2014. Sarah spent a total of 149 days across four IRCs — Campsfield House, Yarl’s Wood, Colnbrook, and Dover — ‘hanging out’ and talking to detainees and staff, both informally and through formal interviews and focus groups, to help understand daily life in detention, exploring questions around identity, belonging, and ‘home.’ The stories reflect particular ‘moments in time’ and are, of course, only partial bits of people’s lives.

These stories touch upon the complexities of immigration detention as an administrative exercise of state power that allows individuals to be ‘held’ as they are sorted — the ‘wanted’ from the ‘unwanted,’ the ‘legal’ from the ‘illegal,’ the ‘deserving’ from the ‘undeserving’ — along familiar lines of race, gender, and socioeconomic status. And these stories show how diverse individuals resist this state power, coping, struggling, resisting, and surviving. 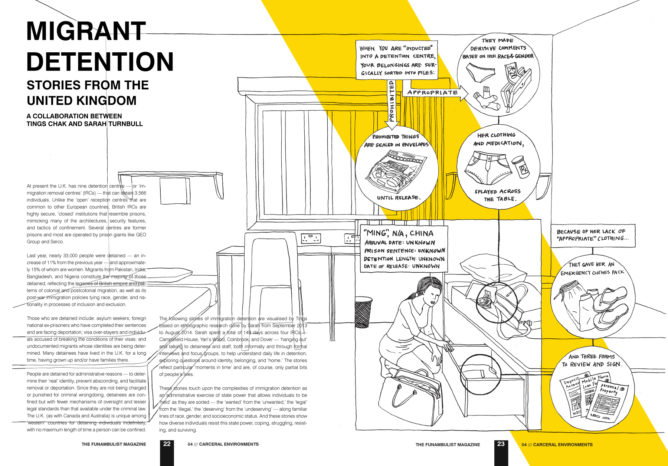 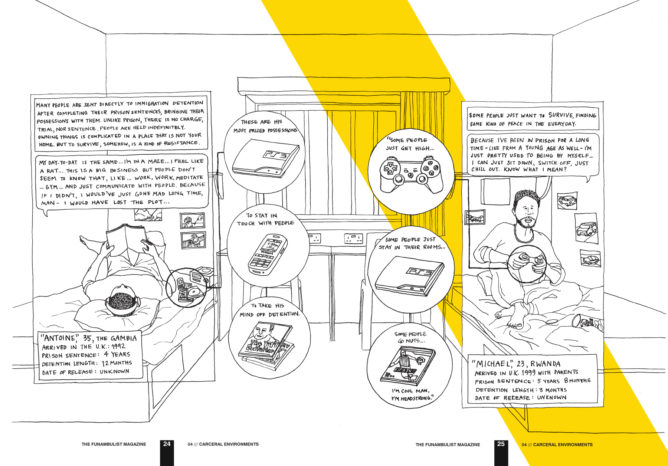 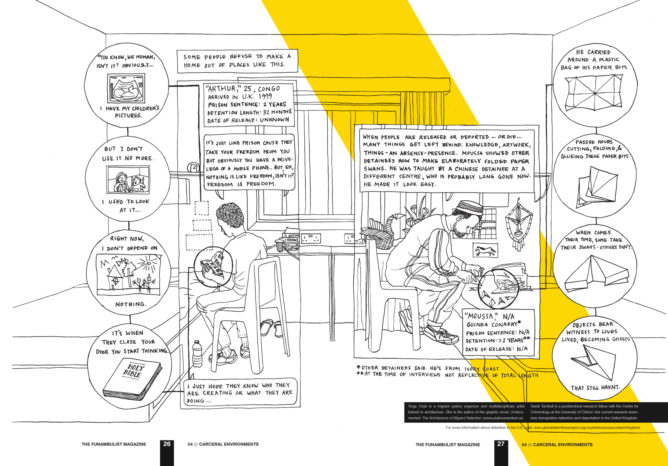