Young men. Afghan, Gambian, Senegalese, Syrian, Moroccan, Iranian, Pakistani, Somalian, Ivorian, Kurd from Iraq, Afghan from Iran… Some of them are fleeing from destroyed conflict zones much covered by medias; some of them are running away from more silent, less visible but equally dangerous wars; some of them don’t see any future in their country of origin; some of them wish to join their family; some of them want to continue their studies; some of them have simply made the choice to let themselves be guided by youthful energy, dreams, adventure desires and idealism…

Demba, Ayao, Djibril, Hafeez, Arman, Ahmed, Babûr, Basem, Samer, Rashad, Rachid, Azlan (all names have been changed), we met at the crossroad of the many reasons that pushed them on the route, and the ones which brought me in Serbia and in Macedonia for a fieldwork in the frame of my doctorate thesis. Our encounters took place in different space-times of their long and step-by-step journey. They were only a few windows through which I glimpsed pieces of their story, their experience, their knowledge, their feelings and their emotions: at borders zones, in transit camps, inside shelter for asylum seekers, in parks, trains or buses, on foot, in the cold, under the sun, the rain or the snow, exhausted or lightly recharged, stressed or weakly eased, stuck or on the move, forgotten or at the heart of the public attention. A smile of hope on the lips. Always.

They represent on their own, the complexity of our world. They are the mirror of the current chaos; they are also the reflection of the confusion that arises from it, in terms of its understanding and about the answer we can bring to it. An increasingly complex world, and therefore an increasingly difficulty to grasp it. For this reason, they are the direct victims of the easy, tempting and hasty categorizations… these pure creations coming from the will to give illusion that the issue is entirely understood, and therefore potentially controllable.

On this so-called “Balkan road” — this is how our medias and politicians call it, despite the fact it rarely evokes anything for them — they have been all reduced to “illegal” border-crossers with various nuances between “economic migrants” and “refugees.” And, within this last designation, some of them have been labeled “SIA” (for Syria, Iraq, Afghanistan) and allowed to take the humanitarian corridor established by governments, the United Nations Refugee Agency, and Non-Governmental Organizations, from Greece to Germany, through Macedonia, Serbia, Croatia, Slovenia and Austria, days after days, registration camps after registration camps, lining up to get the right paper after having been fingerprinted and photographed, waiting hours to get into full trains, get off, wait, get in, wait, get off… Ways and means to introduce order in disorder.

Concurrently with this relatively well-oiled and smooth-running circuit, one can find many byways. Some of these persons, were categorized as “non-SIA” and, consequently, haven’t been welcomed on the priority corridor. Countless workaround and detours, chronic pushing-backs, police brutality, exorbitant cost, resort to smugglers, many risks, danger of death, imprisonment, backspaces, barbed wires, long walks… this is what the word “journey” means to them now.

For some of them, we had the chance to meet again. They finally reached Germany. They are now recognized as “asylum seekers,” waiting for this status to turn into “refugee”, the unique guarantee to regain basic rights, including the one to settle, to work, or to study . Since they arrived there, they’ve already been to almost three different camps — not forcibly but without choosing it either — all more or less closed and marginalized, far away (geographically and socially) from cafés or bars, jobs, universities, young or old German people, shops, cinema, museums, sports halls: they’ve been kept away from opportunities to fit in their “host” society.

As for the others, Facebook and/or WhatsApp enable us to keep in touch. After our paths diverged, me, being able to fly back directly to France, and them, forced to use byways, I haven’t heard from them for a couple of days… until one of them wrote me in French: “Lucie, policemen arrested me. I am in jail in Hungary, in the town of Békéscsaba. I can connect only one hour every three days. I have not control anymore over my destiny […] I ran away from my country to end up in a detention center, to be deprived of my freedom […] I had to apply for asylum unless I would have been deported to who know where. I am afraid of fingerprints: most of the people who are here have been deported from Germany… […] But don’t worry, ‘One day, all people free’ is the slogan here. We will fight until we get released. Don’t worry ‘On est ensemble’ [i.e we are together].”

They come from different countries, they are from different faiths, their political opinions are divergent, but they are all the targets, and consequently the victims, of the European Union migratory policies: displacement and reinforcement of the control at the external borders; sorting and side-lining of undesirable people; confinement in whatsoever form. The impact of these policies on their migratory paths (and their life trajectories) is unequal. The obstacles they all overcame are different and so are the situations they are now facing. These obstacles have nevertheless in common that they come from the same root: the fear of others. Europe succumbs more and more to panic, building ever more borders between a supposed “them” and “us.” The most visible are the physical walls marked by gates, fences and barbed-wires, the latest of which was the one built between Slovenia and Croatia, two European Union member states (November, 2015). All political, legal and immaterial borders, such as visa policies and biometric surveillance systems — to name a few — are equally perverse, insane and murderous. 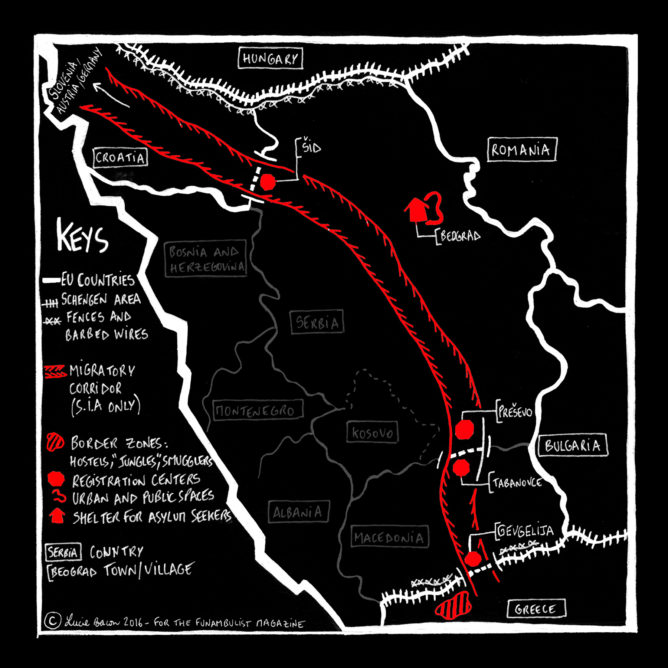