As a refugee child, I was used to repurposing objects — toys, clothes, books — that had fallen out of favor with another. After we were sponsored out of the temporary refugee camps on a Californian marine base to a Minnesotan suburb, we lived by the formula that trash plus time and labor could become more than what it had been before. The memories of reupholstering secondhand couches and cushions, picking through piles of discarded clothes at church basement sales, paying a dollar for each overstuffed paper bag, and mending or customizing a pair of worn corduroys or out-of-date blouse, followed me long after our parents passed from poverty into middle-classness. Since then I have had brief periods during which I decided to purchase new clothes “as is” – like eighth grade, when I wanted what was then fashionable (acid-wash denim skirts and marled over-sized sweaters), or my first year on the tenure track, when I was still struggling to piece together a professorial look. But again and again I return to these other habits for being with things with histories, even if those histories are not mine. Why hide the fact of reusing, repurposing? In high school I would cut short the long, calf-sweeping panels of my mother’s hand-me-down ao dai or transform a pair of fishnet tights into a body stocking pulled over my head. Punk gave my naive sartorial politics — about gender and sexuality, but also about race and refugee trace — another gloss. Trash was now political for me.

After I moved to the East Bay to go to college but more, to commune with the punks of my suburban dreaming, I found the uniform easy to adopt. Laddered tights, worn-thin t-shirts, and patched jeans, I learned an anti-consumerism that articulated anew how I prioritized my clothes (though I later came to understand this as an overlay to a refugee aesthetic I held close), and also how I practiced wearing them. I would embrace that dense interaction between human and garment, that history of a body we so often wash clean or discard once too worn. So I was introduced to a one-time staple of the uniform: punk pants. 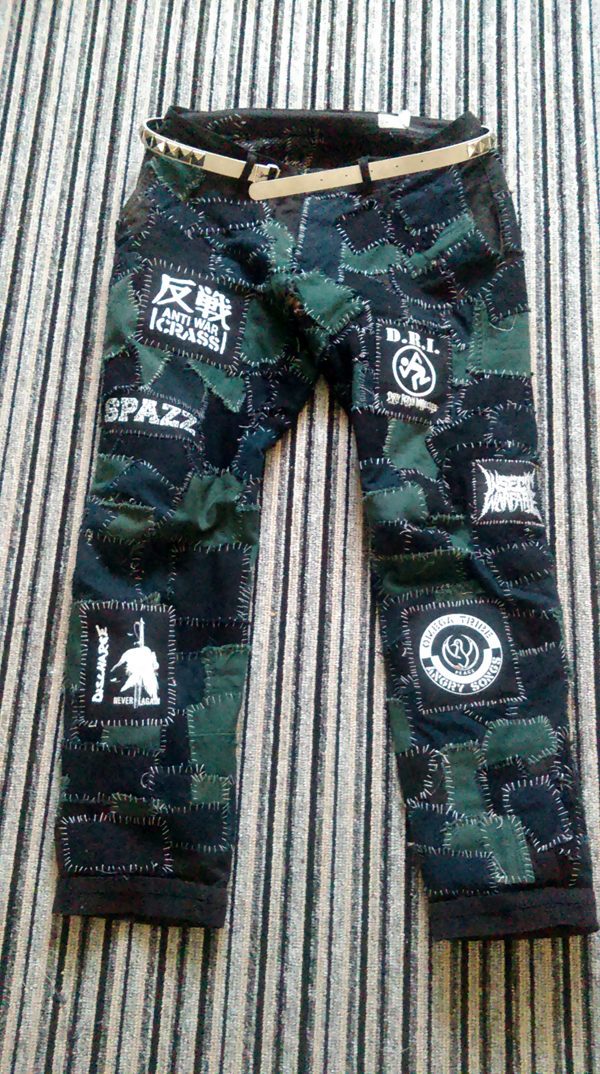 A pair of usually black jeans, sometimes altered to taper against the calf to ankle (in the age before cotton-lycra blends made possible our now-ubiquitous skinny options), which undergo a durational process of wear and conspicuous repair, the hand (and knees and ass and…) of the wearer is seen in a hundred details marking the passage of time and the labor of becoming. I wore the same pair of jeans day after day — to classes, to my job at a dorm cafeteria, to my volunteer shifts at the not-for-profit punk record store, to clinic defense and to protests — and rarely washed them. Instead, I let the grime and grease accrete until these sediments fused to the fabric, manifesting a semi-glossy patina and permanent creases. I covered some of the holes from wear and tear with silk-screened canvas patches and scraps of fabric, sewn in black or color-contrasting thread; an Assück patch sewn over a hole below the left back pocket (because “ass”) and fuzzy leopard print over another. Those heady years of immersion in punk and politics were compounded in these jeans in a porous contiguity. I wore these one chaotic night I ran from baton-wielding police who disrupted the illegal show in an abandoned theater, and the lazy afternoon I swore my life to punk, sitting on the floor of my best friend’s bedroom listening to anarchist records out of milk crates.

My punk pants were a material artifact that told a story of both an individual practice of duration, and a collective aesthetic of devotion — a highly personal accretion of time and purposeful labor as evidence of my punk pledge. Hand-stitching and patching lay at least one part of the foundation for my relationship to a collectivity; once refugees, and then punks. One’s punk pants measured one’s continuous observance, a threshold experience that shaped the shift from one phase to another. Shading into ontology, this ever-incomplete garment might even be conceived (in a horrible paraphrase from Roland Barthes) as a clock for punk being.

While anti-consumerist, such practical and strategic repairs and accrued layers became an aesthetic in and of itself. Anecdotes about “speeding up” the encrusting were passed around, like rubbing motor oil or coal or even peanut butter into the denim for shine, or smearing jam for stiffness. These techniques were sometimes dismissed as cheats — a counterfeit pretense rather than a lived presence — but transmuted also as another passage, in this case through painstaking labor. Patches and scraps are sewn onto pants without regard to functionality as repair or reinforcement. Without imputing causation, it is perhaps unsurprising that Japanese punks perfected the crust pant when we lay them with and against the folk textile practice of boro. The deconstruction and reconstruction of these pants is no longer about mending the garment to extend its life cycle, against disposability, but about appreciating such imperfect creativity as its own reason and justification.

Fashion finds in subculture a rich source for mining commodities, and brooks no delay. After 1991, the year that punk “broke” within the mainstream, multi-billion dollar retailers trafficking in alternative cultures rendered the idea of the punk uniform — even its evident appearance of wear and repair — unstable. The distillation of an aesthetic accumulation into its component parts which were then mass-produced (pre-distressed and pre-patched by machines, while production quotas structured the time and labor of factory operators) made obvious what had been true all this time, that our flags are unreliable signifiers. Even history can be faked.

It would seem to follow that material and social durability, the exchange between garment and wearer through customization, would be more important than ever. And yet the hand-sewn assemblage of punk pants became for a moment fashionable. A London Royal College of Art graduate and a creative consultant for Diesel, Finnish designer Hiekki Salonen in 2011 offered for sale “fully embroidered, hand patched jeans” for 720 pounds (or $1,150). Black denim pants covered in long, horizontal black strips of fabric, and patched in places with screen-printed white line designs that approximate punk logos, these are described thusly: “Hand printed, stitched, appliqued and with unbelievable detail they truly are a future collectible, a timeless design item and a unique take on a classic.”

Hand patched, future collectible, timeless design, a classic. The entrance of thousand-dollar crust pants into the fashion system fascinates me, inasmuch as it demonstrates so well how the politics of time and labor — and in this case the sort of labor — determine the degree of fashionability of a garment. Idioms that evoke time are ever present in fashion in order to name separations and distinctions, and these include craft and industrial conceptions. Most obviously, fast fashion is also a practice of labor, while haute couture affirms that, as American writer Mary McCarthy put so well over seventy years ago, “the toil of many hands is the sine qua non condition of fashion.”

These pants were never worn as part of one’s youth, as the wearer’s initiation. Instead these jeans refer to a practice and aesthetics of duration in the signature of laborious craft made legible to the fashionable, in this case as hand-patching, and the near-instantaneous delivery to a discerning consumer for whom the outrageous cost of purchase includes the tribute of another’s time. Customized for you but not by you, the de-skilled consumer and wearer is nonetheless enhanced by the visible handicraft of another. Of course, none of the value of fashion knowledge passes to the weaver, cutter, or sewer whose skilled labors are central to the pants’ conception. I know, because my aunt sewed piecework for prom dresses in her apartment in Little Saigon (a Los Angeles neighborhood close to Disney’s fantasy theme park), contract labor for an eponymous major retailer who was also the object of protest in the 1990s by Asian women garment workers for unpaid wages.

Authority instead passes here to the designer, whose recognition of another’s work as artful — some anonymous punk somewhere — becomes the same as authorship. These hand-patched jeans are not subject to actual wear and tear (and for a thousand dollars are not likely to be) through a fashionable aesthetic of repurposing without an original object of such time or labor.

Where the distinction between refugee and waste collapses — both excesses of exploitative structures that discard and dispose of the unusable — is also where the distinction between fashion and trash hardens for me. That is, I have an affinity for other castoffs that nonetheless endure despite theories of value that would name such persons and things trash. Fashion creates so much waste, but trash might yet persist with new purpose. Punk for me is in part just such a politics. 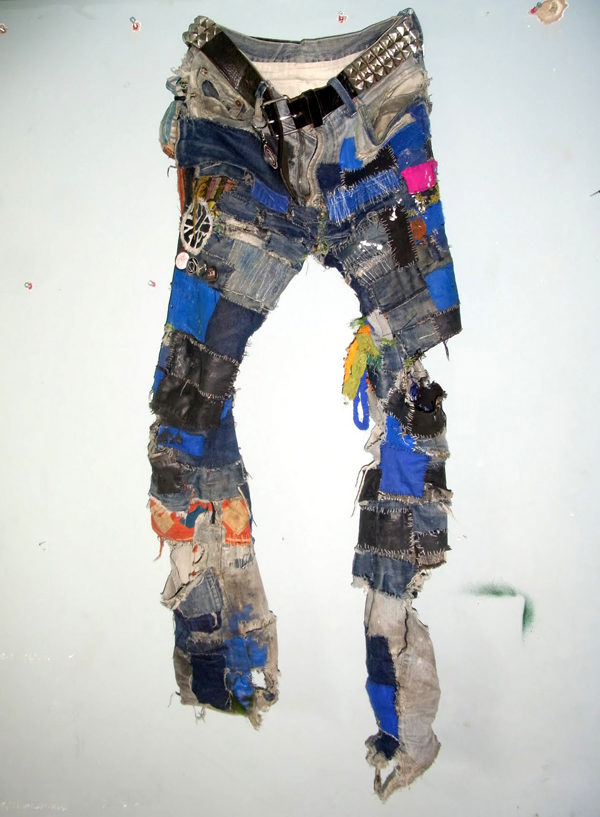 Here I am reminded of one of the greatest punk films of all time, Times Square (1980, dir. Allan Moyle). Set in 1980 New York City, Times Square is a love letter to a tarnished city in transition, and two girls’ romance with punk rock rebellion and each other. Dubbing themselves the Sleez Sisters, Pammy (the daughter of a local politician) and Nicky (a wayward street tough) run away from those institutions that would “fix” their perceived imperfections, disappearing into the margins of the city where trash endures, and also suffers similar campaigns of correction. Throughout the film, the girls reclaim that which was discarded — whether the detritus they bring into the abandoned pier they make into a home, or the people that a politics of respectability cast aside. In the final denouement, Pammy calls the local radio stations to announce an impromptu, illegal midnight show in Times Square. With plastic bags to pull over their heads and black greasepaint to raccoon their eyes, girls create their own versions of the Sleez Sister uniform, boarding buses and subways from all over the New York City area to converge in Times Square. In her now-signature armor and bandit eye make-up, Nicky performs on the marquee of a Times Square grindhouse theater above a milling crowd of screaming fans. But as the police approach from behind, Nicky jumps off the edge of the roof and into a tattered blanket held taut by a group of girls — staging her own “death,” her swan song, like a true rock star. Disappearing into the crowd, whose chaotic uniforms provide camouflage, she evades capture by the police. As a sadder but wiser Pammy watches her vanish into the night, this final moment resonates with a war cry Nicky screams from atop the marquee before her star performance: “They might be able to blow me away, but they can’t blow all of you away!”

When I was a rebellious teenager, my mother would say to me, pointing to my visibly worn and altered clothes, “We don’t have to do that anymore.” She even threw away my punk pants once I left for graduate school, having left them behind after punk broke my heart. Years later, my mother has come around to admiring my still-punk style, my incarnation of refugee inheritance. As Nicky said, those of us who were trash persist, and we remember.